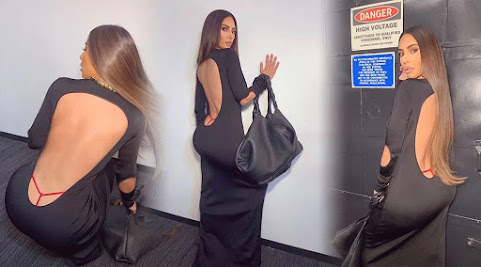 Right now hottie Kim K inspires this glimpse at all of the relevant morning headlines as we consider community news, pop culture and news from around the nation in his well-rounded compilation.

It's been quite some time since COVID-19 led the local newscasts. But that's likely to change this week as area hospitals report the biggest influx of coronavirus patients since the pandemic began. There are reports of some local emergency rooms turning ambulances away due to lack of bed space.

KANSAS CITY, Mo. - A site of tragedy will soon give way to new hope. Crews will break ground today, Oct. 19, on a new building where two Kansas City firefighters died in the line of duty. A memorial marks the place where firefighters John Mesh and Larry Leggio died back in October of 2015.

US stocks gained as investors maintained optimism for Democrats and Republicans to pass fresh stimulus ahead of the November elections. House Speaker Nancy Pelosi expedited talks on Sunday, setting a 48-hour deadline for the White House and Democrats to reach a compromise.

The Supreme Court said on Monday it would take up cases concerning President Donald Trump's border wall and a controversial policy that requires asylum seekers to remain in Mexico as they await hearings in the United States.

WASHINGTON - Republican senators are increasingly voicing fears that President Donald Trump could lose the election. Some are openly fretting that he'll turn the party's candidates into electoral roadkill, and are distancing themselves from him to an unusual extent.

Kim Kardashian is trying to bring back the exposed thong

There are some things that should be left in the early noughties; like dresses worn over jeans, Nokia phones, and exposed thongs. Unfortunately, Kim Kardashian has declared the latter a *thing* again, and we're clinging onto our mid-rise jeans like never before.

It has been called the perfect pandemic companion book. It is a creepy tour guide of things to see, mostly out in the open, around Kansas City."I Googled a lot, looking for weird things around town," author Anne Kniggendorf said.For instance, there is a two-stone cemetery at the corner of Johnson and Lamar avenues."A lot of things like this are right where everybody can see them," she said.

A cloudy and chilly start to the week

Staying cloudy and chilly as the week we begins We need the rain and there will be a few opportunities this week; Best chance for a widespread soaking rain is Thursday night/Friday morning There is one big warm up likely around Thursday KANSAS CITY'S MOST ACCURATE FORECAST Monday: Cloudy and cold.

Brittany Howard - Stay High is the song of the day and this is the OPEN THREAD for right now.