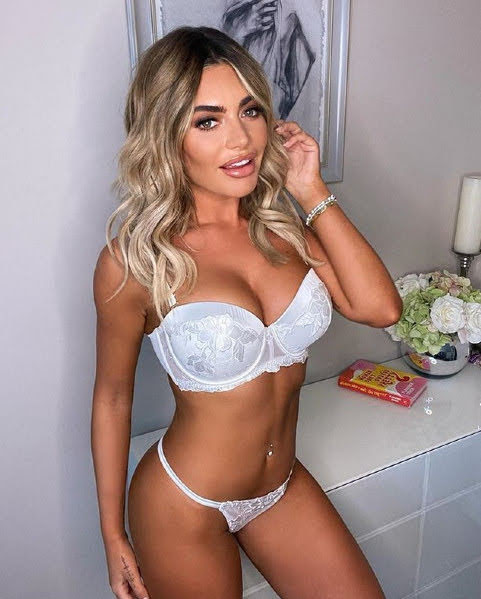 KANSAS CITY, MO (KCTV) - Kansas City, Missouri reached a grim milestone and could soon surpass a gruesome 1993 record of 153 homicides in one year. Each of this year's 153 homicide victims left behind loved ones whose lives forever changed the moment a killer took a life.

Megan Barton Hanson says 'guys, I know how to please your girlfriend'

HELLO, boys. Megan Barton-Hanson is here to help you have mindblowing sex. In the final part of our series, the Love Islander reveals how to turn up the heat in the bedroom . . . and beyond. And today she is addressing the fellas, talking about what men can do to make their partners oh-oh-oh-so happy.

Fox News host Sean Hannity called on Joe Biden to break his silence Tuesday as developments continue to emerge surrounding his son Hunter and his questionable foreign business dealings. "Joe Biden, you have a lot of questions to answer, and It's time for you to answer them," Hannity said.

Breonna Taylor shooting 'had nothing to do with race,' officer says in exclusive interview

MONTGOMERY, Ohio - A Louisville officer at the center of the fatal police shooting of Breonna Taylor said her death is a tragedy - but it shouldn't be lumped in with the slayings of George Floyd and Ahmaud Arbery that have sparked protests from coast to coast.

A grand juror in the Breonna Taylor case has spoken out, challenging statements made by the Kentucky attorney general and saying that the jury was not offered homicide charges to consider against officers involved in Taylor's killing.

Trump lashes out wildly as he seeks an election comeback

President Donald Trump is struggling to find a compelling rationale for his reelection ahead of the final presidential debate, firing off wild, scattershot attacks against an expanding list of perceived political enemies.

WASHINGTON (AP) - President Donald Trump on Tuesday called on Attorney General William Barr to immediately launch an investigation into unverified claims about Democrat Joe Biden and his son Hunter, effectively demanding that the Justice Department muddy his political opponent and abandon its historic resistance to getting involved in elections.

KANSAS CITY, Mo. - Medical marijuana is now being sold at a handful of Missouri dispensaries including one in Lee's Summit. But before it can be sold, it has to be tested. The state licensed ten laboratory testing facilities, but so far only two have been approved to begin operations.

Patchy dense fog and isolated showers for your Wednesday. Mostly cloudy skies with a 30% rain chance and highs near 58 today.

Waxahatchee - Can't Do Much is the song of the day and this is the OPEN THREAD for right now.

Up next: Hannity sends cameras to North Pole, urges Santa to 'come outside' and address the Easter Bunny's allegation that Santa's operation is fueled by Colombian drug money.

^^ Kind of like CNN cameras outside of Roger Stone's house. Oh, but you conveniently forget that like a typical lib.

Hey jurors on the Breonna Taylor grand jury, you weren't presented homicide charges because the cops' actions did not fit the legal definitions of the 4 types of murder.

Charlie Horse is right about the Taylor case.
In the Freddie Gray case in Baltimore, the prosector, who's husband was planning to run for mayor of that town, OVERCHARGED the officers involved, purely to put on a show and play to the mob.
The first two cases were decided in favor of the officers.
And the next three cases were DROPPED.
If the "activisits" don't like the law, then they need to work to change it.
But rule by the mob and the celebrity media will and should lose every time.

Well yeah, 7:52, except ol Roger was convicted and sentenced for his crimes.

Joe Biden has never and will never be charged with shit. Keep clinging to hope you fucking dumb fucking Trumper. I'm just going to sit here and watch as the number of convictions for those in the Trump orbit continue to climb.

^^and yet even the authors of this story won't sign their names to it. All fake news. We've moved on. Make sure you let me know when somebody's charged..OK? BTW, where's the Durham report?

You mean the investigation? It's ongoing. It's already produced criminal charges, notably the main FB8 lawyer for the joke Mueller investigation.

Well, Biden did go into hiding like a flash once the damning evidence started to detonate.

Funny how the libtards were all over Epstein (especially the Clinton hitman) but are defending the hell out of Hunter Biden ain't it?

No. We just don't get excited about Russian propaganda like you do. Being as you're a Russian troll so....

"The Party told you to reject the evidence of your eyes and ears. It was their final, most essential command."

"And if all others accepted the lie which the Party imposed—if all records told the same tale—then the lie passed into history and became truth."

And yet Hunter Biden is not running for office. Weird!

Just in: The Easter Bunny has demanded that William Barr investigate Santa Claus' alleged ties to Colombian drug lords before the election. Film at 11.

When's Obama going to jail??? When's Biden withdrawing from the race? When will a legitimate news organization run the Biden laptop story? You know it's bad when even Faux News refused to run it. n

Pretty sure Bandit has mental issues and his family refuses to interact with him. Gonna be a lonely Thanksgiving.

Let the record note that we have a hostile witness with schizophrenia and sock puppets.
😏🙄🍿

BREAKING! William Barr has just advised the Easter Bunny that he is busy updating his resume and is negotiating with George Mason and Liberty Universities for his post-Trump employment, and therefore has no time to investigate Santa's alleged involvement with Colombian drug lords.

NEW @FBI says it has “nothing to add” to @DNI_Ratcliffe statement that #Hunterbidenlaptop is not part of a Russian disinformation campaign.
“If actionable intelligence is developed, FBI in consultation w/ IC will evaluate the need” for defensive briefings pic.twitter.com/yfhhTewWb8

The FBI & DOJ concur with DNI Ratcliffe’s assessment that Hunter Biden's laptop and the emails in question were not part of a Russian disinformation campaign. FBI does has possession of the Hunter Biden laptop in question.@DNI_Ratcliffe @FBI

And yet Hunter Biden still is not running for office. Weird!

Hunter's a nice-looking guy. Maybe Baby Burt's got the hots for him.

And yet Biden is tied to the corruption and enabled his son in the act. Hunter likes em young. Like father like son. Weird. 😏🙄🍿

It's OK for Catholics to come out of the closet! You and Hunter now have the Pope's blessing to get it on, Baby Burt.

^^^ Nope, he leaves that to Republislime!
Hunter isa man, and no man would do that, (or need to)!