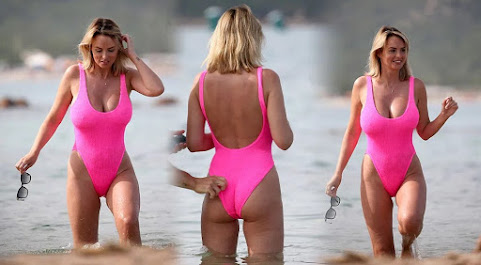 Right now, hottie Rhian and her recent cheeky romp inspire us to connect with pop culture, community news and top headlines for tonight.

JOHNSON COUNTY, KS (KCTV) - It's all hands-on deck at the Johnson County Board of Elections Building as mail-in ballots were being prepped and sent out to the post office. "Our voters can expect to receive them in their mailbox, which we are expecting by the end of the week and maybe the first part of next week," Johnson County Elections Commissioner Connie Schmidt said.

KANSAS CITY, Mo. - Voter registration is now over in both Missouri and Kansas, and we're now less than three weeks from the general election. With the countdown clock ticking until Election Day, there's plenty to discuss on this week's edition of 4Star Politics. Rep.

RHIAN Sugden left fans hot under the collar as she showed off her stunning figure in a see-through lingerie set. The busty model, 34, slipped into the sexy black underwear set as she continues holidaying in Turkey with husband Oliver Mellor. Rhian seductively raised an eyebrow and tucked her hair behind her ear as she gazed into the camera.

Takeaways from Day 3 of the Amy Coney Barrett confirmation hearings

Supreme Court nominee Amy Coney Barrett faced the Senate Judiciary Committee on Wednesday for likely the last time before the Senate votes to confirm her in two weeks.

The Justice Department reportedly concluded its investigation into unmasking requests made by Obama-era officials without charging anyone involved or releasing a public report on the issue. Sources told The Washington Post that the investigation, previously led by former U.S. Attorney John Bash, concluded without finding any substantive wrongdoing.


AMERICANS STILL WAITING ON THAT CHECK!!!

House Speaker Nancy Pelosi and Treasury Secretary Steven Mnuchin spoke Wednesday morning but again did not strike a deal on coronavirus stimulus. The pair talked by phone and had "productive" discussions about language in relief proposals delivered over the weekend, Pelosi spokesman Drew Hammill said in a tweet.

The first lady noted that Barron, 14, exhibited no symptoms, a departure from herself and the president, who have both said they experienced mild symptoms. The president announced that he and the first lady had tested positive in the early-morning hours on Oct.

Judge Barrett, don't use 'sexual preference' for LGBTQ people. It's incorrect and alarming.


Back To Basics In Brookside

A local hardware company is filling the former Tuesday Morning space in Kansas City's Brookside neighborhood. Tuesday Morning, which filed for Chapter 11 bankruptcy in May, closed the store at 104 W. 63rd St. as part of a plan to shutter more than 130 stores across the U.S.

LAWRENCE, Kan. (AP) - At least 147 University of Kansas employees are taking an early retirement buyout this year as the school looks to cut costs amid the coronavirus pandemic. Provost Barbara Bichelmeyer said in a message to faculty and staff members Wednesday that unit leaders across campus have asked to fill roughly 20% of the positions that will be vacated through the program.

Cooler air will be in place Thursday

I literally hold my breath each and every day waiting for Dave Helling to give me his riveting analysis of how i should vote!!!!!!!!!!!! Anything at the Star is garbage!

Barrett should have said "butt pirates and rug munchers" instead of "sexual preference".

The Demonrats are making themselves look more foolish than they already did before the hearings. Can't wait for Pelosi's next meltdown on a friendly media outlet.

Whats sad is those idiots still wander around SF streets in piss and crap and still thank her for it by voting for her!!!! You just cant help some people!

^^You being a prime example of that.