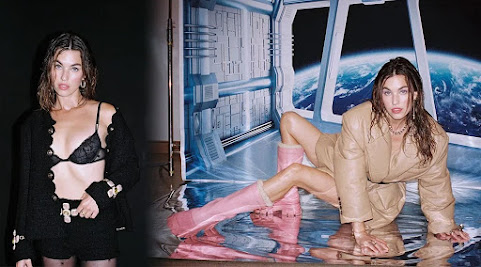 Right now a legacy hottie inspires this peek at pop culture, community news and top headlines for the early morning denizens of the discourse.

KANSAS CITY, Mo. - A federal indictment Wednesday accuses the former owner or Rockstar Burgers, Brian Smith, in being part of a drug ring. But what happens now? FOX4's Sherae Honeycutt looked into his other court cases, and the future of the West Bottoms. The burger restaurant is closed for good, but federal prosecutors say [...]

Here's How Virtual Classes Are Going For Kansas City Public Schools, One Month In

Kansas City Public Schools Superintendent Mark Bedell says internet access is one problem, even after the district pushed out more than 6,000 internet hot spots. Also, only 80-84% of students are connecting on a daily basis.

KANSAS CITY, Mo. - Chiefs fans can breath a hesitant sigh of relief. A prominent local doctor is casting doubt on the likelihood of star quarterback Patrick Mahomes contracting COVID-19 from a recent potential exposure. An image showing Mahomes in greeting Patriots cornerback Stephon Gilmore, who tested positive for the coronavirus shortly after the game, spread like wildfire on social media.

Coughing Through Hannity Interview, Trump Says He Wants to Do Saturday Rally

During a Thursday night interview in which he repeatedly stopped to cough and catch his breath, President Donald Trump wouldn't reveal whether he's been tested since he was diagnosed with the coronavirus but did say he hopes to hold a campaign rally in Florida this Saturday night.

WASHINGTON - Democratic nominee Joe Biden will now participate in an ABC town hall with voters in Philadelphia after President Trump announced Thursday that he was boycotting their second presidential debate in Miami over a sudden format change.

House Speaker Nancy Pelosi and Rep. Jamie Raskin, plan to introduce a bill to create a panel known as an Oversight Commission on Presidential Capacity, to "help ensure effective and uninterrupted leadership" within the presidency. The move comes after President Donald Trump tested positive for COVID-19 last week.

Joe Biden on Thursday said he is withholding his position on the pivotal issue of expanding the Supreme Court until after Election Day, telling reporters that, "you'll know my opinion on court-packing the minute the election is over."

Why are infections rising again in US?

The news of President Donald Trump's positive coronavirus test, and his subsequent hospitalisation, has reminded the country that no-one is protected from this virus. So where is the US right now in dealing with the pandemic?

Blue Springs schools now have the green light to put more fans in the stands at this Friday's football games.The district announced Wednesday that 1,000 fans are now allowed in the stadium, thanks to the rule change to the COVID-19 order from the Jackson County Health Department.

KANSAS CITY, Mo. - A group of women throughout Kansas City have found solace in a group text as they all have one thing in common: losing a child to suicide. One of those moms is Jennifer Padgett, who now has to use her memories to remember her son Luke.

Repeat heat today. Mostly sunny skies with highs near 84 by this afternoon.

Clean Bandit and Mabel - Tick Tock is the song of the day and this is the OPEN THREAD for right now.

very nice to read during my morning blast off. Appreciated!

Biden should do something similar to what Clint Eastwood did.
Put an Orange Halloween Wig on a hat stand and "debate an Empty Hair"!


Yes Trump is on the warpath he has every right to be and so are the rest of us. He has exposed some nasty things about some politicians and they are scared to death of him. Nancy Pelosi is going to try and remove him again today with Amendment 25 lets see how this works out.

About Mahome he isn't going to get the virus. He's so stupid he wouldn't even know if he had it anyway. What a little Puss.

^^and yet he could beat your geriatric ass with one arm tied behind his back. He rules, you drool geezer. Never forget that! Weird.

The only reason Biden wants a virtual debate is so his handlers can show him flash cards and give him answers on white boards.

Trump being "on the warpath" bears a lot of resemblance to a three-year-old throwing a temper tantrum because somebody said the "no" word.

All fuss, fury and feathers, sort of like a Bantam Rooster fight or the last three years of Federal Government.

"Coughing Through Hannity Interview, Trump Says He Wants to Do Saturday Rally"

Ooooooooo! Please make it a HUUUUUUGE rally with people packed in and no masks allowed! And tell his fans NOT to vote by mail.

Nasty Pelosi's desperation is highly entertaining. The bitch is grabbing at straws. NOTHING she has tried has worked yet including NOT DOING HER JOB. Would you go for impeachment again please?
🤣🤣🤣🤣🤣🤣🤣🤣🤣🤣🤣🤣🤣🤣🤣🤣

Pelosi will be the Reason Trump will have a landslide.Oh and Sleepy JOE and HARRIS. The worst Democrats to run in the History of America. There are people who will vote for them. Give them books send them to school and they become Communists.

Trump will an audience of millions today in hosting the Rush Limbaugh show,the liberals whining starts at 11 am

Wasn't Rush Limbaugh supposed to be dead by now? Satan must be pissed!

So you'll be giving TKC readers a break, Baby Burt?

^^ Polisi is pissed. How did you miss that?

^^^ Postings from the Sooty Chicken = "Clucks from a Cuck"!


Biden and corrupt Demosleazeballs to pack the Supreme Court with uber-left scammers.. fuck the Constitution.

18. Exhibit 'A' of right wing talk radio spewing poison into the veins of the country.

Limbaugh should have been in jail years ago for his activities in the Dominican Republic, drug trafficking, or possession of Cuban cigars.

Bullshit to English translation: "NO FAIR!" 😏🙄

Biden could always go on Air AmeriKKKa and do a rally.

If no one has noticed, the Dems are playing the game of "Create Bogus News Event Every Day" until the election is over. It takes the coverage off of Blunderin' Biden and Harris, his putrid running mate, and all the answers they won't give to the questions Americans want answered, such as will they pack the Supreme Court. It also takes coverage away from the increasing evidence that the Obama-Biden administration spied on the Trump administration and tried to remove a duly-elected president with lies and false accusations.

The Democrapic party has never stooped lower than it has now. They did it the day after Harris' terrible debate performance with talk by Pelosi of invoking the 25th Amendment and the debate organizers quickly announcing the next presidential debate would go virtual. The debate organizers are all Democraps or RINOs (Republicans In Name Only). The next debate moderator used to work for Biden. How dumb is that?

Their 25th Amendment antics are so that they have a way to boot Biden if stealing the election works.

Even Nancy Pelosi is desperate. She's setting the stage for a Trump or Biden victory - leveraging mainstream media to normalize 25th Amendment so that she can attempt to take Trump out if he wins or Biden out if he wins.

Trump's medication is so strong, he is now dropping the F-bomb on the radio.

He's completely unhinged and delusional. I'm just waiting for him to drop the n-word (publicly) before election day.

Leadership is not just about sitting in the pilot’s seat. It’s about knowing what you’re doing and taking responsibility for it. Being prepared, ready and able to handle anything that might come your way.

It’s in that highest calling of leadership that Donald Trump has failed us so miserably. Now it’s up to us to overcome his attacks on our very democracy, knowing nearly a quarter million Americans won’t have a voice―casualties of his lethal lies and incompetence.

Now, we are all called to this moment. When you look down at our beautiful, boundless country, you don’t see political divisions. It reminds us of who we are and what we can be. That we are in control of this nation’s destiny. All we have to do is:

"Coughing Through Hannity Interview, Trump Says He Wants to Do Saturday Rally"

Watching libtards scream ALL IS WELL while Biden and the rest of their party is spiraling towards the tobes of Hades without parachutes is entertaining as hell!

Biden is afraid to face Trump face-to-face again. What a chickensh*t! The debate committee is full of Dems and RINOs. The moderator scheduled for the second debate used to work for Biden. What a joke!

Biden wants to debate from his basement where he has a teleprompter and others to save his ass.

^^^ Yet it is Trump hiding in the White House and said he wouldn't show up to debate which is why it was cancelled.

Biden will be hosting a town hall debate in place of the official debate next week. He's been out campaigning this week in Ohio, Pennsylvania, Michigan, Florida, Arizona, Nevada... but keep lying to yourself about the basement if it makes you feel better.

Could you make your lies at least slightly plausible?

And yet he wasn't hiding today. Doesn't hide from the press either. Takes their questions every time. Weird.

^^^ The first true thing you said ever.

That's quite a ticket.

Makes a great bumper sticker. Keep up the good work!