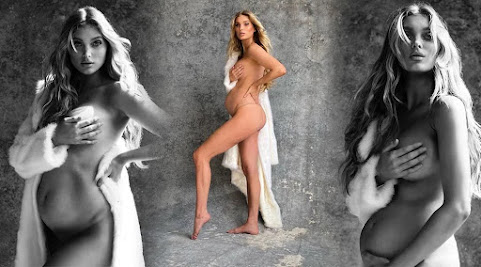 We're filling in the blanks after the biggest news the nation has ever seen hit early in the morning. And so hottie Elsa inspires us to carry the weight of local journalism responsibly and with hotness. Accordingly, we share pop culture, community news and top headlines to start the day.

KANSAS CITY, Mo. - Mayor Quinton Lucas took to the streets Thursday evening, touring a neighborhood in the Historic Northeast that has a history with crime. Robert Ontman's family has called the Lykins neighborhood home for three generations. The father of six has seen the area deteriorate over the years.

LEE'S SUMMIT, MO (KCTV) -- Once you've lost something for a few years, people tend to give up on never finding it again. That's what a Lee's Summit graduate thought about his class ring after 20 years. However, one man searching to reconnect people is delivering memories back to that high school graduate decades later.


Supermodel Shares Sexy Peek At Bun In The Oven

Stephane Cardinale - Corbis Elsa Hosk is going to be a mom! The Swedish supermodel took to Instagram today to announce her pregnancy with a series of stunning maternity photos captured by photographer Sante D'Orazio. Nude and gorgeous, Hosk let her icy-blonde tresses flow freely, as she draped her body and growing baby bump in a plush fur coat.

Conservative commentator Candace Owens blasted Democratic presidential nominee Joe Biden on Thursday for suggesting President Trump's rhetoric about the suburbs was a "racist dog whistle." Amid the unrest that has taken place in cities across the country, Trump has attempted to channel his "law and order" message to the suburbs, warning that if Democrats are in control, the violence will expand beyond the urban areas.

Sen. Ted Cruz: We are one vote away from losing our fundamental liberties

The Republican Party followed historical precedent in 2016 and is doing the same in 2020 when it comes to deciding on voting to fill the vacant Supreme Court seat, writes Sen. Ted Cruz. Furthermore, Cruz writes, we need a full court on Election Day, given the high likelihood we're going to see litigation that goes to the court.

The House passed a $2.2 trillion Democratic coronavirus stimulus plan on Thursday night even as Democrats and the Trump administration struggle to strike a relief deal. The bill likely will not get through the Republican-held Senate and become law.


Win At All Costs

Trump 'Will Not Accept Any Result That Is Not A Victory,' 'Atlantic' Writer Says

In the first presidential debate, President Trump was asked if he would refrain from declaring victory until the election has been independently certified. He refused to make that commitment. Atlantic writer Barton Gellman was not surprised. "That's a man who won't leave," Gellman says.

KANSAS CITY, Mo. - Child hunger continues to be an ongoing problem for families during the pandemic. But one Kansas City police officer is addressing the issue as best she can, feeding kids who are learning from home. She's being called a hero, delivering her own version of meals on wheels.

Some of the coldest air so far this season will arrive overnight. Patchy frost is likely for areas along and north of 36 Highway. Temperatures will drop into the mid to upper 30s overnight with a few spots staying closer to 40 degrees. Friday will feature partly sunny skies with highs back in the low 60s.

Shawn Mendes - Wonder is the song of the day and this is the OPEN THREAD for right now.

Lucas walking around a neighborhood reminds me that Sly made a big announcement that he was going to be on the scene of every homicide.
That lasted about a long as it took for him to discover that that meant he'd have to make at least ten visits a month and that the media quickly lost interest, so there soon were no cameras.
Lucas's empty gesture has about as much significance or result.
It never ceases to amaze how many worthless new "programs", empty PR events, grandiose announcements, and fake anti-crime "nonprofits" these folks can up with to prevent them from publicly acknowledging the actual source and cause of the horrendous murder rate in KCMO.
A continued dance of death and willful ignorance.

I hope Trump goes down fighting in the White House. Like Hitler in Berlin. (And no, Hitler came out fighting with a Lugar in each hand but it was covered up.)

White supremacy is going to keep you keyboard pussies safe from the looting, murdering negroes and homosexual politicians like Quinton.


Sucas loves the walks doesn't he? He knows this will do nothing but it's cheap and idiots will look at him and thinks he's doing something and he's not.

Pat Mahomes is a real loser too. Does anyone know how foundations work and what they are all about? This son of a bitch acts like he's all into racial equality and the opposite is true. He's using racial equality to cash in and get even more wealthy. Wise up to this Piece of crap.

When is Lucas going to schedule a "walk-around" in similar parts of the city for, say, around 2:30am?
He's not likely to learn much followed by a crowd and the clueless media.
All entertainment, all the time!
Meanwhile, the homicides continue unabated.
Sad.

I hope you realize that you display colossal ignorance of Trump and Hitler.

Lykins is more Central Core than Northeast KC. The Old Northeast neighborhoods are all north of Independence Blvd./Ave. Lykins is south of it.