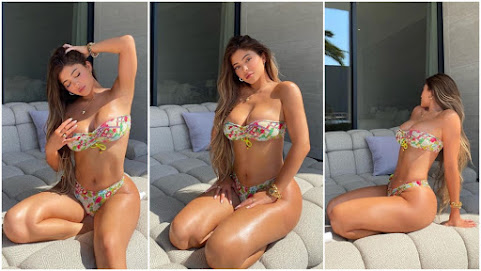 In this post we take a quick look at hottie Kylie doing her best to boost voter turnout which inspires us to share community news, pop culture and top headlines.

After 21 years, Gail Worth is parting ways with the Harley-Davidson franchise and crafting her new Grandview-based brand: Gail's Powersports. The decision was driven by Harley-Davidson's plans to "drastically" reduce the number of motorcycles it produces annually, Worth told the Kansas City Business Journal. Her business, Gail's Harley-Davidson, is a 50,000-square-foot dealership with about 50 employees.

KANSAS CITY, Mo. - A fully-involved semi-truck fire shut down Interstate 435 southbound at 210 Highway Friday morning. Kansas City, Missouri, fire crews are on the scene of the incident that happened around 6:30 a.m. According to KCFD, several patients were transported with critical injuries, though it's not clear how many at this time.

Biden tests negative for COVID-19, reminds folks to 'wear a mask' after being mocked by Trump for mask at debate

Former Vice President Joe Biden has tested negative for coronavirus, according to his personal doctor, as the Democratic nominee sought to continue campaigning during the month before the Nov. 3 election. Dr. Kevin O'Connor, the primary care physician, said Biden and his wife Jill were each tested and "COVID-19 was not detected."

Leave it to Donald Trump to test positive for COVID-19 just two days after a disastrous debate performance. It's tempting to think this is yet another of his reality show stunts, but it's hard to believe that he could get away with faking something like this considering that the Trump White House leaks like a sieve.

House Speaker Nancy Pelosi spelled out a dire prediction for President Trump should the election come down to the House to be decided. "We have all sorts of opportunities to take down that one vote," Pelosi said during a news conference Thursday morning.

A Democratic sweep may not be so bad for stocks if it leads to a bigger stimulus, some traders say

The trading community is actively debating the effect of more fiscal stimulus on the economy and on the markets, but they sometimes seem to be talking about two different types of stimulus. There is the one that would come from the negotiations currently underway between House Speaker Nancy Pelosi and Treasury Secretary Steven Mnuchin.

Haunted houses have devious designs to out-spook a murder virus

The spookiest time of the year is about to get a bit more spine-tingling for Kansas City, thanks to the growing presence of COVID-19. In a city with nearly 35,000 total COVID cases reported since March, Halloween is going to be unrecognizable from any previous iteration.

KANSAS CITY, Mo. - Nearly 20 years ago, the Hispanic community added a general neutral term to its lexicon, and in recent years, younger generations have embraced the change. Latinx is a gender-neutral alternative to Latino or Latina. Spanish words that end in "o" are generally male, while Spanish words ending in "a" are generally female.

It's been a big year for drinking in Kansas City-and not just because we've needed a constant stream of alcohol to get us through the drudgery and blinding anxiety of existing during this era. No, we've been drinking for better, less cynical reasons.


well...some good news out there ..glad to see Gails kicking out Harleys. .plus the Harley plant shutting down..

Always need titays and motorcycles in the news cycle. Thank you Tk.

Kylie needs to lose a lot of weight, she’s gotten so big her head looks like some tribe in the Amazon shrunk it!

Has the White House announced Trump is mildly dead yet?

Kylie is a little thick. Maybe she gains an ounce for every BBC she receives.

Then she’s gained about fifty pounds which is 800 ounces, she must really love her some bbc! Damn she be a hoe!

Donald is finally able to access the "Right to Try" he brags about at rallies.

But getting experimental treatment isn't good.

It's only a matter of time before they invoke the 25th amendment to transfer presidential powers to Ivanka.

6:30 If that happens she can put me on a leash with a spiked dog collar. Be working that while Donny's away. I be shopping Pet Smart and waiting for the call.

Pay no attention to the woman now signing the documents at the hospital bed.