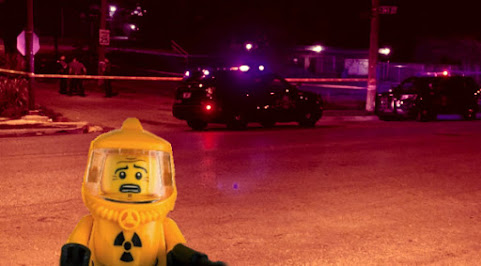 The historic rate of local violence doesn't rest for long as a lull in the spate of Kansas City gunfire didn't last for long.

Thankfully, the gunfire isn't life threatening according to authorities.

However, it already seems as if a wild weekend is on the way.

Probably on the way to work.

Actually, some of people might have been. That gas station gets more traffic than people might think. It's very close to the highway and has pretty cheap prices.

That’s the same gas station where the pregnant suspect interfered with the arrest of another suspect and was arrested. The same event that the stupid fucking protestors are using for a reason to set up tents. Get some personal responsibility. My children were taught better by the time they were 8 years old.

The gas station is a major drug hot spot, there’s always at least ten people on the lot most of the day, I think it’s time to put some serious pressure on the owner who’s allowing these idiots to congregate on his property. The mayor needs to get his head out of blm/antifa’s ass and have major drug busts there and all throughout the hood, most of the murders are drug related and yet he’s done nothing to solve the problems that his silence and lack of leadership is causing. Man up mayor mcdumbo and stop your people from further embarrassing the law abiding citizens or there will be a mass exodus. You and your people’s fault, nobody else is to blame.

Resign and get out of the way if you can’t handle it.

Hey, these are just constitutional scholars studying and debate the Federalist Papers at 35th and Prospect. These towering intellects and law-abiding citizens are just quoting James Madison at 1:00 a.m. Why is the KCMO Police harassing these amazing scholars and hard-working citizens? Don't the police know that if it is a black killing a black, there be nothing to see? The police need to stop harassing these future Rhodes Scholars and Truman Scholarship award winners.

Bullshit how would you know?? The police have never abused your children.

Mogadishu on the plains.

This is the Shell station which was the scene of last weeks “police brutality “ episode. BLM needs some more paint

0/3? This is not helping the city make record-breaking history.

J.C. Nichols is behind these shootings !! Arrest him !!!

Typical black inner city behavior. Will they ever learn? Nope.

Atleast the police werent mean to any negroes in this instance.

Violence is only bad if the police are involved. Get it straight.

Why weren't they at the anti-whitey, anti-cop protest camp?

This is clearly abuse by chief Smith because he wasn't there to prevent the shootings.

If Stacy would walk around the hood night and day, she could save lives because folks could hide behind he fat ass.

Let’s see the mug shots. I believe we need more murals. They would have prevented the killings.

The manager of that gas station calls 911 regularly to break up fights and other crap. The hood rats who gather there have no respect for the business. The night the pregnant woman was arrested, there were multiple people loitering, fighting, parking their cars at the pumps and walking away to hang out. The owner got fed up and called the cops.
Supposedly they hoodrats were there for one of those effective crime-hindering balloon launches. Who does this at midnight? Do your damn balloon parties during the day and don’t disrupt people’s businesses with your foolishness.