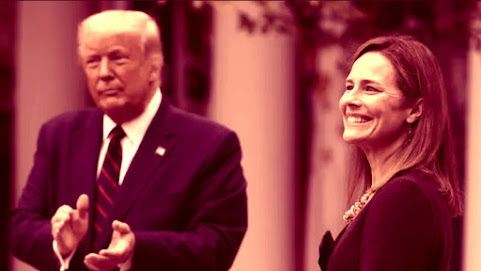 Local reactions after a major win for Prez Trump have been surprising. There are a lot of progressive lawyers in this town and they all seem to be very "frustrated" by the decision to push through the controversial candidate.

Here's one example from a progressive leader of the local blogopshere who we might not always agree with but certainly respect . . .

"What we must now do, folks, is one of two things. We must either impeach both "Justice" Brett Kavanaugh and Justice Barrett or we must pack the Court.

The reality is that local Democratic Party supporters seem fired up about making "significant" changes to American Democracy should win.

Politico: The Other Tool Democrats Have to Rein in the Supreme Court

Independent UK: She’s a Justice for now, but we can impeach Amy Coney Barrett — if the Democrats are brave

not if but when.

You can't blame Democrats. The Republicans decided this was how they would play the game. And the voters are deciding to vote them out. GOP has been losing power since 2018. When they lose the white house and the senate. Their decisions should be reversed when possible.

The Democraps would have done the same exact thing because political parties do what they are capable of doing. At least it didn't cost the American taxpayers millions of dollars like the Mueller Trump-Russia Investigation fiasco and the sending of $1.7 billion of American taxpayer money on pallets from Obama/Biden to radical Iranian leaders so they could kill more U.S. troops. Two of several acts that were stupid and costly to hard-working Americans.

I regrettably voted for Obama, but the Democrats have gone off the deep end. They’ve become the party of lies, lawlessness, very late-term dismemberment abortions, violence destroying once great American cities, high taxes on our paychecks to pay for socialist wet dreams, weak military, open borders, free healthcare for illegal aliens at taxpayer expense, defunding the police, sanctuary cities for criminals here illegally, taking away guns, sending $1.7 billion of our taxpayer dollars on pallets to Iranian radical leaders so they can kill more of our troops, packing the Supreme Court, and more idiotic ideas. No thanks.

Trump is draining the corrupt D.C. swamp of the Brain-Locked Mess Monster named Joe Biden and the rest of his socialist cronies. TRUMP 2020!

Typical cry baby liberal. Loosing so you want to change the rules. RBG should have retired when her buddy Odummy was president if she was concerned about the courts balance. She didn't, too bad so sad.

Expanding the court is the right thing to do.

It has happened before and is legal. The Democrats are wise to purse this option.

You can tell Trump is losing, his cronies are getting desperate.

Going to be butt hurt when Trump takes 47 states including Commiefornia.

Never did so many leftists shriek so loudly about something so thoroughly Constitutional. The antics of the Dems alone during the hearing are worth comedy awards. Booker making his mean crazy eyes. Hirono even more unhinged than usual.

Followed by the further total meltdown following the inevitable confirmation. Did you guys think if you acted the fool enough that it would distract from the laptop scandal? Sorry. That only gets worse day by day. The sound bytes (in Hunter's own words detailing the family corruption business) from tonight's release should be fun.

Anyway, time and time again it's been shown that when leftists are honest about their platform they push votes to Red. So good job Mo! You've added your tiny voice to the general hilarity. Thanks for the votes!

(About that editor, though. Just look into it.)


LUV how these lib lawyers and just libs in general forget that the U.S. had to deal with liberal Supreme courts for a good number of years. They are whining b/c it didn't go there way.

It was about time that Mitch and the conservatives stood up and did the right thing. Remember, Obama famously said "elections have consequences". And moderates and conservatives had to live through Pelosi and Schumer shoving Obamacare down everyone's throats.

So, if Biden wins (God help us if he does) we have to live with it.

Mo Rage is pissed.
What a shock!
Love watching this idiot become more unhinged by the day.
Will definitely have popcorn ready to watch him on Nov. 4th.....the beginning of second term of Trump.

5:18 In 1866, the Republican Congress passed an act reducing the Court's size from 10 to seven in order to curtail President Andrew Johnson's ability to appoint justices. After Lincoln ended the system of enslavement and was assassinated, his successor Andrew Johnson nominated Henry Stanbery to succeed John Catron on the court. In his first year of office, Johnson implemented a plan of Reconstruction that gave the White South a free hand in regulating the transition to freedom and offered Black people no role in the politics of the south: Stanbery would have supported Johnson's implementation.


Congress didn't want Johnson to wreck the progress of civil rights that had been set in motion; and so instead of confirming or rejecting Stanbery, Congress enacted legislation that eliminated Catron's position, and called for the eventual reduction of the Supreme Court to seven members.

The Judiciary Act of 1869, when Republican U.S. Grant was in office, increased the number of justices from seven to nine, and it has remained there ever since. It also appointed a circuit court justice: the Supremes only had to ride circuit once over two years. The Judiciary Act of 1891 didn't change the number of justices, but it did create a court of appeals in each circuit, so the Supremes no longer had to leave Washington.

So free kc, it looks like the republicans saved the day from the racist demoncraps again. No wonder you want to pack the court, you all can’t let go of your racist ways. It’s all about controlling the blacks with you people.

Mo Rage must have one of the worst blog website designs ever known to humanity. Reverse white typeface on black background, extremely small typeface, and an odd blue/purple typeface included against the black background are features that yell "rank amateur."

We’re going to have a packed court. The country will mandate it once the Democrats win all three branches next week. It’s going to happen and there will be nothing anyone can to do to stop it.

There’s no proof that the dimwits will win anything so.....

The Democraps are screwed!

What a shame! MoRage's head is going to explode.

I've not been in favor of more Supreme Court justices, but if Republicans want to play hardball by refusing even to give Obama's nominee a hearing and rushing Trump's nominee to confirmation, it seems to me that Democrats have a right, if not a responsibility to respond in kind.

DEMOCRATS DON'T LIKE IT WHEN THEIR RULES ARE USED AGAINST THEM

Hopefully from a shotgun

Mitch rushed this because he knows the GOP is losing the presidency and the Senate in a few days.

An impeached president that lost the popular vote in 2016 is not allowed to steal 2 seats and select 1/3 of the court. America is in the process of repudiating that.

After Biden selects several justices next year to rebalance the court to America's wishes, Barrett not be part of a 6-3 conservative majority, but 7-6 conservative minority. Enjoy spiking the football now. The Dems will be running up the score next year.

RBG said that nine is the right number for the Supreme Court and neither Kavanaugh nor Barrett have done anything to merit impeachment.

The Republicans went by the rules to replace a justice who waited too long to retire and died while in office. Don’t blame the Republicans for her refusing to retire while Obama was president because she wanted Hillary to pick her replacement. It is not their fault that they waited and did things according to the rules the Constitution established.

What the Dims should do is accept things and move on, but not increasing the crazy at every opportunity is not something that is within their capabilities. They will simply grow more and more extreme at every turn. It is who they are.

RBG also said let the next president pick her successor, so I suggest you not cherry pick quotes about 9 justices and STFU.

The GOP didn't even follow their own rules from 2016 in rushing this through during an election. The GOP's cheating and stealing has ensured there will be a new 7-6 liberal court next year.