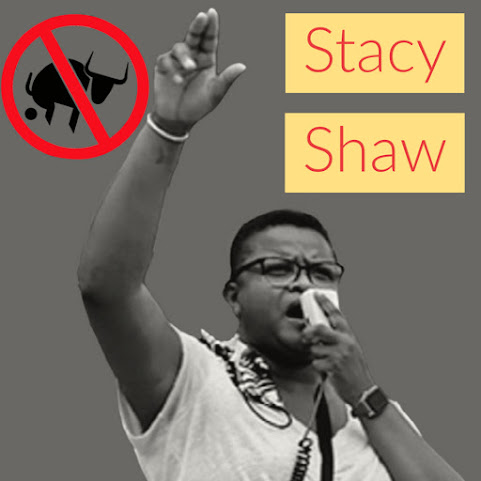 In 2020 Attorney and activist has quickly become one of the most prominent street level organizers and leaders in Kansas City.

However, her newfound notoriety is not without its problems.

AFTER WEEKEND OUTRAGE, STACY SHAW WALKS BACK HER TOUGH TALK AGAINST THE FAMILIES OF KCPD!!! THE RESPONSE FROM MAYOR Q & KCPD: BULL CRAP!!!

Fact is, mentioning families of the po-po is silly and amateur move and it'll be hard for her to explain away.

Reality . . . Threats are flying back and forth in this ongoing tent city protest that drags on and seems to be further away from accomplishing any of its goals.

On the bright side, local MSM seem to be helpful in trying to amp down the dangerous rhetoric.

Moreover, giving everyone the benefit of the doubt, objective observers would be wise to understand that this is a protest from a pencil pusher, academic, attorney and a very talented organizer and provocateur. It's not a revolution or call to violence.

“Having an information campaign is not a threat,” Shaw said. Shaw says she has information on police officers but doesn’t plan on using it in a violent way. “We have that information. We’ve never used it against them. We have discouraged doxing, specifically discouraged doxing. When people wanted L.A. style justice, they were organizers like myself and other people out there in this town that said absolutely not, we want all of their officers to go home to their babies,” Shaw said. What she does plan to do is reach out to officers’ families and close friends to tell them why her group believes the officers should be held accountable.

KCTV5 News told the mayor that reasoning.“That is one of the biggest bull crap statements I’ve ever heard in my entire life. You do not say I’m going to threaten your spouse and your children simply because you want them to understand the nature of someone’s job. That’s ridiculous and preposterous. Her statements were uncalled for and she knows better. She’s a lawyer, a member of the bar. We are trained not to make statements like that,” Kansas City Mayor Quinton Lucas said.

Kansas City Fraternal Order of Police President Brad Lemon’s reaction was similar. “That’s bull crap. You watched the video, everybody else watched that video. We didn’t edit the video. There were no cuts in that video. She said what she said and she’s trying to backtrack it now. The reality is she has threatened the families of police officers,” Lemon said.


wonder if Crazy Stacy's campers have packed it in yet..City Hall closed today..long 3 day weekend with no one around,and nothing to do.

WHY, hasn't anyone filed a bar complaint for her actions? Yep, she's trying to walk this back, but, in her attempt she makes it clear she has the information.

This is outrageous, her statements on the video are clear. Her comments are inviting trouble for officers families, if not by her it could be someone listening at her protests. It's totally irresponsible and some reputable lawyer and I'm suggesting someone that is a democrat and a lawyer needs to come out publicly say they have or will file a complaint to let the bar investigate.

Shaw is wanting the police investigated for every damn thing now it's time to turn the tables.

So, lawyers, step up and show your ethics mean something and don't let this lady who is a lawyer sully all lawyers.

No, it does not have to be a lawyer that files the complaint but they (lawyers) know how to work through the process! May Polsinelli or someone at his firm, Husch, Spencer Fane.

How about Tarwater or McInerney some of these people have credibility and ethics!!

This clownish piewagon doesn't even have the courage to own her own stupid, racist threats.

Stacy Shaw, she looka like a man but she no have balls likea man.

She said what she said, we all have seen what she said and like a typical black person is denying doing anything wrong.

But c'mon. Shirley was rough but she was nice underneath it all and had a heart of gold.

Not sure that is the case here.

That heart is made of Twinkies and lard.

Lucas and his criminal buddy, Stacy Shaw, are up to no good. Lucas is in so deep he is in real trouble. Lucas is telling Shaw and her co-conspirators what KCPD is up to. Too late Lucas. Too late to distance yourself.

Oh wow, she is dining rent-free in your head. LMFAO.

^This idiot is easily entertained^

How to file a complaint against a Missouri attorney:

Watch out. The racist, violent MAGAT Proud Boys will kidnap and murder anyone they don't like. "If they don't get their way, some poor fool gots to pay."

The Chiefs are looking for an offensive lineman. I think she could
be ready for Buffalo in a week.

She could be ready for Buffalo or she ate a buffalo 9:59?


Watch out. The racist, violent demosleazeball BLM "Peaceful Protesters" will kidnap and murder anyone they don't like. "If they don't get their way, some poor fool gots to pay."

The Communist Democrats are threatening the police officers families and children. Cannot get any lower than that.

Next it will be YOUR families if the Communist Democrats take complete control of America.

Patrick Mahomes gets paid $480 million and yet supports criminals over law enforcement.

Yet he’s in your head...weird

Lmao Is that the new universal sign for bull crap? I can’t...

There’s no fear, simply facts. There’s always an answer in a question....weird.

Hopefully it's you dum dum.

Hey buddy, you may be on the wrong page...or just off your ADD meds. Try to stay on topic.

Stacy, you may want to rethink your home and school visits. Not exactly a docile group if they should decide to pay attention to your idiocy.

In a BANANA REPUBLIC there are many people like Shaw. The majority keep a low profile and Yes there are Crooked Preachers also causing problems along with the Main stream media trying to divide the Community. And then there is your politicians. Y

Q Ball is attempting to walk back his support for this violent, disease-ridden bunch of anti-social malcontents. Too late jackass! That genie ain't going back in the bottle dummy. You should have read Frankenstein before you got in bed with the loudmouth lesbian dump truck.

Would have more respect for her if she just apologized and said she got carried away.

Then she would be a real leader.

I'm not trying to discourage her followers, they can do what they want.

But it will take a lot to make me listen to her again.

Stacy Shaw is an ugly guy!

That bitch can try and walk back her threats to the f'ing stone age. She said what she said and it's documented on all kinds of social media. You don't mess with people's families like that and then say, "Oops, I didn't mean it." She's already shown she has a propensity for inciting violence and a total disregard for the law. Her hateful rhetoric has increased over the past several weeks. She is dangerous and quite frankly I would take her threats extremely seriously. You really stepped in it this time Stacy.

I believe her rhetoric as far as I can throw her.

Where is her mask? She must know she is immune since the virus can tell if you are protesting. The virus won't infect protesters.

You mean she's not wearing one? I would have sworn.....

"How to file a complaint against a Missouri attorney:

She went too far. Far too far.

She should backtrack and apologize.

Otherwise, she should be disbarred.

Thanks for the deets. Even if she is forced to say "sorry" we know what's in her chunky heart and it ain't good.

Walk back my ass. She lied her ass off and escalated her threats. She falsely claimed that SHE had been "hold back violence" against the police, but NO MORE, she was turning those people of violence loose and compared it to the ambushes in L.A.

The Mo. Bar won't discipline a Black Woman. Are you nuts?!
That is only for white boys who aren't part of a big firm.

I filed a complaint with the Bar Association yesterday.

The ethical standard for the Missouri or any Bar Association is very low.

Lawyers have no ethics.

They are the hyenas of society; scavenging off the remains of others.

Not as ugly as Maxine Waters or Whoopie, but close.

There are 39 or so tents on the south lawn. Around a half a dozen people spend the night in the tents. It's meant to look like there are a 100 people on site but usually about 12 or so. It's propaganda. Also, shaw gave a news conference around 9am with one or two media showing up. She ranted for awhile.

WTF Stacey, don't you and yours have better things to research than where the police live and where their children go to school?

She isn't in mine. Her fat ass and mouth are going to suffer some consequences.

Is this hippo off her meds or suffering from low blood sugar?

Dear Ms. Shaw,
I promise you don't want to "reach out to me" about my husband. These brave men and women put their lives on the line every single day for complete strangers. And even moreso, for people just like you who would wish ill will on them. Yet they do it anyway because it's the right thing to do. If you think for one second we're afraid of you, you're even dumber than you appear.

It seems past time for clowncilman Bunch, who you might recall, spoke from the podium in support of Shaw and her mob, to admit that he has neither the character, judgment, maturity, or sense of responsibility to continue to serve as a member of the KCMO governing body and RESIGN.
Or be recalled.
Poor decisions have consequences.

3:16 you should let the Don speak on your behalf.

Where is all the protesting against the violence among the community? KCMO murder rate is at an all time high and not a word from Stacy Shaw on how to fix that problem. I guess a city with no criminals isn't a profitable place for an attorney. Especially one that's isn't BBB accredited.

hey coppers, be sure to tell your dumb bitches to STFU!