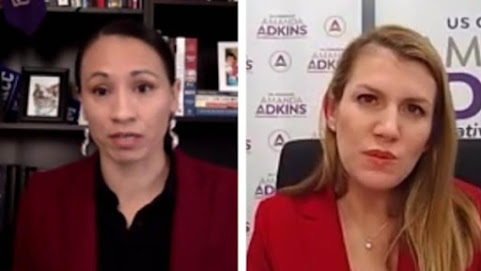 Again, just for political junkies we offer a glimpse at a local congressional debate for EXCEPTIONALLY big stakes at the national level.

The format was crowded and the video and audio were HORRIBLE but for residents of this enclave, it might worth enduring.

The word from the right-wing GOP challenger:

"Amanda Adkins dominated this debate. Sharice Davids consistently struggled to hide from her hard-left, partisan record, and even lied about her support of a government takeover of health care. Davids is not a bipartisan representative, can't be honest, and doesn't get results, and that was on clear display tonight."

Meanwhile, the last word belongs to the incumbent:

Davids is history and even she knows it.

And yet she is leading in the polls and has more campaign money.

Just because you want something to be true doesn't mean it is. Weird.

Reaching back three governors to Brownback is a sure sign of desperation on Davids part as Adkins never actually worked in the Brownback government. That drum was beat to death in every election since he left the governors mansion. I thought Davids didn't respond well on several questions as she seemed to lose her place in her notes. Not very prepared. Adkins did beat that drum that she use to work at some health care company...you know the one, that place. I don't think this changed many minds, no enough minds. I'll vote Adkins though.

All my heros were taught how to use indoor plumbing and to read by colonizers.

German-born Sharice Davids is a joke in light of the Dems wanting to shut down the country for far too long because of COVID-19 while she brags in commercials about helping small business. The devastated small business owners must be seething in anger when they see that on TV. She's a big hypocrite. If Davids is going to do a commercial, it SHOULD NOT be about helping small businesses! And she wore an "All My Heroes Killed Colonizers" shirt. Her poor judgment in attire is only equaled by her poor judgment in legislation.

All of my Heroes Killed Indians who shit in the forest and scalped white people for fun.

Dream on 10:47 because your stupidity will take you no where.

Biden has more money as Hillary did and Trump will beat their asses again.

In Davids case money isn't going to buy her the election like last time so just STFU!

Hopefully the annoying Atkins TV ads disappear this week as the party pulls the plug on spending for this lost cause.

Actually it will be more than 15 this time.

I read the Davids quote and I thought to myself "When Brownback was governor wasn't Davids in South Dakota running her coffee business into the ground?" She sure wasn't here fighting against Brownback! Another lie uncovered. BTW. like Cleaver I think Davids has an open loan balance still unpaid. We do not need more leaches like Davids and Cleaver. Never forget the inconsistencies of the liberal left.

SHARICE DAVIDS IS AS DUMB AS A STUMP!

Why did she show up to this debate? It was PAINFULLY obvious that she is an empty shell without the intelligence, reasoning, or logic to discuss topics of interest to Kansas residents.

How did Sharice Davids get into and graduate from an Ivy League law school? I now know that it's true she was recruited and given special consideration because the Cornell Law School faculty and administration sought to increase minority participation. They scored a trifecta with Davids, checking the boxes of Female, LGBT, Native American. By accepting remedial student Sharice, a smart qualified law school applicant was denied admission.

Sharice Davids performance in this debate is proof that she's an imposter.

Adkins has this one all the way. David's was thinking about the orgasm she had the night before with some tramp she picked up.

2:02. Better check the polls again
David's is behind now.

Davids will snatch the loss from the lips of victory.

Adkins has zero chance of beating Davids. Davids will be more vulnerable trying to hold her seat after her second term.