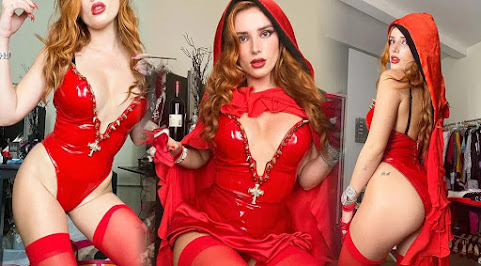 More than 47,000 people vote in advance voting in JoCo in five days

JOHNSON COUNTY, Kan. - The upcoming election has a lot of people out voting ahead of Election Day in Johnson County. On Saturday morning, Johnson County Election Commissioner Connie Schmidt tweeted the latest numbers as of end of day Friday.

"Lil Red 👑 grandma doesn't approve of my outfit," Bella captioned the eye-popping pictures. As you can see, the sexy costume includes a skintight latex lingerie style corset and including a bright red cape. It's unclear if the sheer red tights come with the outfit, but she steaming up to shots in them.

A parade of people backing President Trump on Saturday crashed Democratic nominee Joe Biden's drive-in rally in Bristol, Penn. The former vice president called the band of Trump supporters parked outside his rally "chumps" while addressing the crowd. "I'm running as a proud Democrat, but I will govern as an American president," he said.

Washington Post: Trump privately said to donors it will be 'tough' for Republicans to keep Senate

President Donald Trump made a prediction about the GOP's control of the Senate at a fundraiser this week, privately telling donors that it will be "very tough" for Republicans to keep control of the chamber in the upcoming election, namely because Trump refuses to support some senators, The Washington Post reported on Saturday.

BARACK Obama trolled Donald Trump for "low ratings" as he ripped into his successor in a fiery speech in support of Joe Biden. "His TV ratings are down," Obama said in the speech at Florida International University on Saturday. Obama also roasted Trump for his handling of the coronavirus pandemic, claiming the president "doesn't have a plan."

When Amanda Mertel took a break from teaching to stay home with her two children this year, she didn't think there'd be a pandemic. She also didn't think she'd be running a full-fledged business out of her own kitchen.

Hide Transcript Show Transcript IF WE HAD BREAKS IN THE OVERCAST, THE TEMPERATURE WOULD FALL OFF QUITE A BIT. BECAUSE WE HAVE THE CLOUDS ACTING LIKE A BLANKET, OUR TEMPERATURES WILL SLOWLY FALL BACK BY 9:00 WE WILL BE AT 41 DEGREES. 10:00 OR THEREABOUTS, 41 WILL BE THE TEMPERATURE.

This is the OPEN THREAD for right now and here's a list of just a few of our favorite Autumn anthems.

As always, thinks for reading this week and have a safe & fun Saturday night.

TOP PHOTO -- SHE BLEW AND SHE BLEW

When Bella veered off the straight and narrow path, she met a Wolf who wanted to eat her. It's a Grimm tale!!!

TOP PHOTO Guy for the win.

The woman in that video sounds like she is struggling to sing while out of breath and with a sore throat. My ears are bleeding.