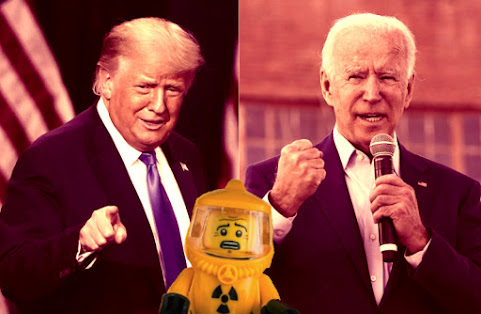 And so, once again the nation watches contenders to lead the nation argue with each other and FAIL to convince the other half of the country.

As always, we welcome the insights, perspective an analysis from our blog community regarding this divisive topic.

6 things to watch for in tonight's debate

What Trump will have to hope is that tonight is an exception to the rule. If the fundamentals of the race are more favorable to Trump than polls suggest, after all, even a marginal lift from the debate could prove significant. At least that's what Republicans are banking on.

Pressure builds for NBC's Kristen Welker to address Hunter Biden at debate: 'This is a moment of truth'

The pressure is building for NBC News' Kristen Welker to address the ongoing scandal surrounding a laptop purportedly belonging to Hunter Biden during Thursday night's final presidential debate as the mainstream media has essentially dismissed the story.

Hours before Donald Trump is set to face off for the last time against Joe Biden on the debate stage, the President handed his challenger an attack on a silver platter.

Presidential debate live updates: There will be no plexiglass to separate Trump, Biden tonight

NASHVILLE, Tenn. - President Donald Trump and Democrat Joe Biden meet for the final time on the debate stage Thursday, an event that could shape the course of the presidential election. Refresh for the latest updates from the last presidential debate.

Where The Presidential Race Stands Before The Last Debate

Welcome to FiveThirtyEight's Election Update for Thursday, Oct. 22, 2020! As President Trump and Joe Biden prepare to take the stage tonight for the final presidential debate, Trump has just a 12 in 100 chance of winning the presidency, while Biden has an 88 in 100 chance, according to our presidential forecast.

Former Sen. John Danforth (R-Mo.), a member of the board of directors for the Commission on Presidential Debates, ripped President Trump Donald John Trump Judge rules to not release Russia probe documents over Trump tweets Trump and advisers considering firing FBI director after election: WaPo Obama to campaign for Biden in Florida MORE for accusing the nonpartisan organization for being biased against him.


Typing Team Struggles Just Like The Rest Of The Nation

The hardest job at tonight's presidential debate? Typing the closed captions for Biden and Trump

No one is more thrilled about the addition of a mute button at tonight's debate than the closed captioners. These fleet-fingered stenographers are unsung heroes of American politics, tasked with making sense of the candidates' verbal jousts and volcanic interruptions in real time. "And it is not easy," captioner Susan Hahaj, 58, told MarketWatch.

This post will likely lead the rest of the night with maybe a few updates underneath for close readers and fellow news junkies. This is DEBATE OPEN THREAD inviting local opinions, jokes, perspective & more . . . You decide . . .

The mike cuts are going to look horrible and the president might just walk out if he gets too frustrated.

Doesn't have much to lose.

Might be a good night for a mike drop move.

Is the big man-baby president going to throw a fit when they mute his bullshit and walk out like he did with 60 minutes? Count on it.

Okay, so I won't vote for Hunter!

BUT none of that convinces me that Trump is wOrth my vote. Everything sucks since he took over.

Trump got snipped by the mics. He looks like an old fool.

This is the era of snipping.

Everybody is going to get to see their freedom of speech decline dramatically in the coming years.

Trump is getting his clock cleaned. Sorry.

But he's the least racist person in the room!

If you look at the facts of the debate just in terms of policy, Trump has a lot more to say about the course of the nation.

Joe is just running on empty pleasantries and the "never Trump" platform.

Trump may not be "racist", but he continuously used racism as a tool to try to bully anyone who stands up to him.

Personally, I doubt he is racist, one would have to have convictions distorted, but still some sort of convictions to be a racist, and I don't think Trump has the convictions or the principles or even the moral fiber of a cloud of smoke.

If only Trump could speak in English during these debates, rather than carrying on in his habitual "Babble-onian", we might gain some clue as to WTF he's talking about!

Trump has done ok. Biden sounds like he has dementia.

Wait until the information off of Bobilinsky's phone is released.

No doubt, the FBI wants to sit on this, as they have done since last December (Exactly like the Anthony Weiner Laptop - no one has ever seen the shit on there.), but the information from Hunter's laptop is out there and the information from the phones is not exclusively with the FBI.

It's a classic pay for play, money laundering, foreign influence scheme and the truth will out. Christopher Wray and Gina Haspel are crapping their pants along with a lot of other Deep State snakes. I don't know who will win the election, but if Trump wins, look for some serious house cleaning at the so called "Intelligence Agencies" in addition to indictments, prosecutions, many, many plea deals and subsequent incarcerations.

The bullshit and lies that the media will desperately and frantically put our over the next 12 days will be hysterical, sonic wails of terror in the hopes of stopping Trump at any cost.

You forgot-pay the Big Man his cut.

Joe’s going to open the border and give illegals healthcare and take jobs from our people, he’s
going to make us wear masks indefinitely, end our energy independence, mandate our healthcare, raise taxes, and continue to use his o

His office as pay to play.if Joe wins all of us are screwed. Joe relies on his voters being too stupid to make their own decisions.

The moderator interrupted Trump 30 times versus interrupting Biden only twice. Pretty lame on her part.

I regrettably voted for Obama, but the Democrats have gone off the deep end. They’ve become the party of lies, lawlessness, very late-term abortions, violence destroying once great American cities, high taxes on our paychecks to pay for socialist wet dreams, weak military, open borders, free healthcare for illegal aliens at taxpayer expense, defunding the police, sanctuary cities, taking away guns, sending $1.7 billion of our taxpayer dollars on pallets to Iranian radical leaders so they can kill more of our troops, packing the Supreme Court, and more idiotic ideas. No thanks.