WHAT DID KANSAS CITY LEARN FROM CULTURAL APPROPRIATION MISADVENTURES OF JESSICA KRUG?!?! 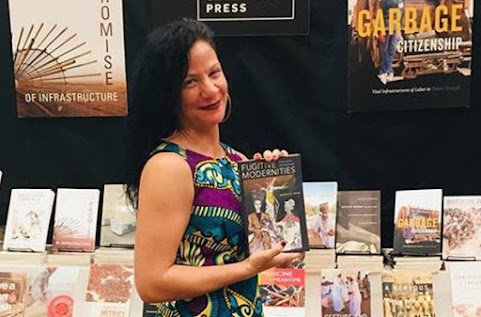 This story deserves another mention if only because the outraging over faking it reminded us that disgraced locals will be vividly remembered by Kansas City acquaintances if only to cast judgement and share a bit of the spotlight.

OVERLAND PARK, KS (KCTV) -- Many are still talking about a story we covered in our news last night where Jessica Krug, an Overland Park native and associate professor of African American history, admitted she's been pretending to be Black for her entire career.

WASHINGTON - George Washington University is investigating the case of a history professor who allegedly admitted to fraudulently pretending to be a Black woman for her entire career. In a blog post that has gained international attention, a writer claiming to be Jessica Krug, a GW associate professor of history, writes that she is in fact a white Jewish woman from suburban Kansas City.

A US academic who said she lied about being black will not teach classes this semester, George Washington University has confirmed. Jessica Krug, an associate professor whose work focuses on Africa and the African diaspora, admitted in a blog post that she was in fact a white Jewish woman from Kansas City.

Bogus "black" college professor Jessica Krug also tried to pass herself off as a Puerto Rican from the South Bronx - but her lousy salsa dancing made her suspect, a borough activist told The Post on Friday.

Fam Seyz They Were Fooled

Jessica A. Krug, an associate professor at George Washington University, of African and Latin American studies who portrayed herself as Black her entire professional career has now revealed she is White.

Jessica Krug, the white college professor who faked being black, started out as a politically active student at one of Kansas City's most prestigious schools and once tried to organize a flag-burning event, the mayor of Kansas City, a former classmate, told The Post on Friday.


When White People Pretend to Be Black, It's Dangerous | HipLatina

The recent controversy surrounding the white professor, activist, and writer Jessica Krug has highlighted the complexity of the obstacles Black Latinas face. For Black Latinas, identity is a fraught issue because we defy the comfortable that most people prefer. Are we Latina? Yes. Are we Black? Yes.

I learned that roleplay can be fun outside of the bedroom as well!

I learned that phony blacks are as lazy and entitled as the real thing.


jewish Jessica on all the media ..big NY Times article too!

I learned woke is whack.

I learned that liberals are really gullible. She punked them for 20 years!

Krugs' career choice is no surprise. Jews have been sowing racial division in this country for the better part of a century. Every president of the NAACP was a Jew until 1975. Jewish weaponized slander from the ADL and the SPLC have made anti-White propaganda into an industry. The Jewish media has been tirelessly cranking-out hit piece after hit piece preaching the White privilege lie while constantly pushing sick fantasies of Holocau$t victimhood.

It's called being an American first. It's called assimilation. The Irish, Italians, Germans, Japanese, Greeks, Spanish and many others have done it with great success. There should be only one National Anthem for one America.

And that black victimhood and racism is so pervasive that ppl impersonate blacks to get a ahead.

I learned that a Jew can play liberals like a violin.

Hitler is laughing in hell with George Bush Sr.

The story is not really Jessica Krug. The story is about a culture and institutions that make it possible for Jessica Krug to not only go undetected but to thrive. Sure, she is mentally ill, but so are we apparently.

i didn't learn anything - she is smarter than african american women though.

She still has a great career in front of her being a front for some "minority business enterprise".
You know, the downtrodden folks who get to the front of the line for government contracts.
Get on one of those airport renovation deals pronto!
Just another "academic" phony.

Come on Talcum X, time to declare yo whiteness. Hahahaha

I learned she7 could not ever pass for black. She only fooled white people.

If you can choose gender, why not race?

Not unlike Antifa and the LGBT pretending they are BLM . Only to lead the Blacks to a path where we set back Racism 100 years. If you think anyone likes Blacks more after all this rioting, looting and killings.. You are as dumb as those that allowed Antifa and LGBt to hijack their cause and lead the commie parades.

What are they supposed to do? Ask for DNA? She practically bullied her way up the ladder.