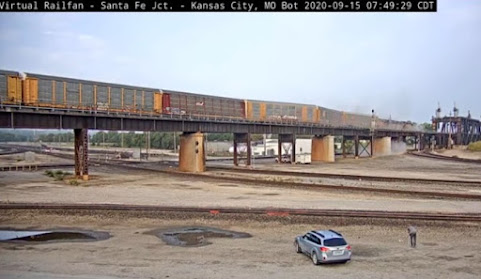 Union Pacific confirmed it was one of their trains involved in the derailment.

“There were no injuries,” the spokesperson said. “Union Pacific forces are working to re-rail the locomotives and cars so they can be cleared from the bridge. The cause of the derailment remains under investigation.”

Who is that antifa looking dude that just happened to be there taking pictures? That is not a coincidence. Antifa is in KC. JPB will do nothing except dismiss the case and offer support.

^^Bitch please. You watch too much TV. Go find something else to do.


I would really like to go to union station and see the new exhibit but I can't support anything in Kansas City with a clear conscious. Plus the fact that Quinton Lucas has torn our great city down to a sewer it would make me sick. This is really sad because I have only missed a couple of exhibits that have been at union station. I think I'm going to try and find out how to get this and other exhibits moved out of Kansas City so I can go see them. Something else Quinton Lucas has ruined for the American people in our area.

Seems street and road degradation is not Kansas City's only Transportation Issue. Trucks can't navigate our collapsing streets, railroads are falling apart, and soon construction issues are going to close the Airport.

Where's "Windwagon Smith" now that we need him?