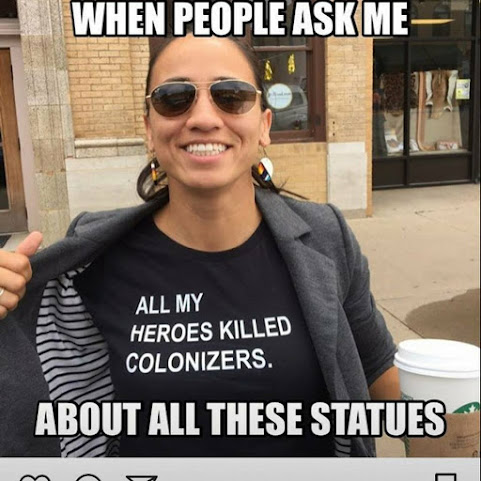 Many centuries ago (okay, last year) our blog community was FIRST to highlight a questionable fashion choice by a groundbreaking Kansas elected official.

Now, that gear has become a talking point in a contest that's likely closer than most people realize.

Unintentionally, Amanda Adkins seems to be equating cops with colonizers. Most middle-class white people won't understand the comparison but it's unfortunate . . . Police are members of our community who risk their lives to protect residents - Colonizers were foreign invaders who garnered riches from killing, raping and exploiting native people. Again, this is an assumption on the part of the Adkins campaign but it plays to the worst intentions of right-wing voters. Moreover, it's remarkably effective.

SCORE AN EPIC WIN FOR THE ADKINS CAMP!!! THIS AD HITS KANSAS REP. SHARICE DAVIDS WHERE IT HURTS AND PAINTS HER AS A RADICAL PROTESTER IN LEAGUE WITH ANTIFA!!!

Again, this comparison is false but that doesn't mean it doesn't resonate.

Reminder: TKC stopped caring about who wins political office a long time ago because election victories has been imperially proven to have ZERO impact the lives of plebs in any significant way. However, simply for entertainment purposes, this advert is effective and offers a sign that the GOP contender is SERIOUS about competing for this congressional seat.

Accordingly, here's the word from the GOP upstart power player:

"Sharice Davids said that our law enforcement system is 'rooted in violence,' and she refuses to concretely disavow radical calls to 'Defund the Police,'" said Adkins campaign spokesman Matthew Trail. "Voting with Nancy Pelosi at a rate of 99 percent, Davids is part of the problem in Washington, not the solution."

Beginning today, the ad will air on broadcast and cable television in KS-03.

I guess “it’s just a T shirt” but what a stupid t shirt it is.

Sharice is 100% as much of a citizen of this sovereign republic as I am.we each share a heritage that is the dispossession or displacement of the native tribes and extinguishing their claims and titles to this land . And we each benefit the same from that. Is she gonna renounce social security, federal highways, the anti-discrimination laws of the US or it’s states, the right to own soil individually instead of only by virtue of tribal me,bership, f the entire concept of individual rights as opposed to a tribe and a chieftain having a patriarchal dominance over her. It costs her nothing no money no risk to make a stupid statement like that. A false moral superiority.

A picture is worth a thousand words.

Sharice is a stupid cunt. One and done, didn’t do any damage. Kansans should be embarrassed for electing her, it’s shows how dumb Kansans are.

Wasn't going to vote for anyway. Done absolutely NOTHING since being elected.

Will no longer vote for Sharice David’s.

Been saying it on this blog. She hates white people and cops. The tee shirt says it all. Adkins may not be the ideal candidate but she’s not a hater.

There is s reason why the Indians were called savages.

Her heros children learned to read, to write and stopped digging holes to shit in after they ultimately loss to civilization. Ungrateful ass hole.

So Adkin's main qualification is she's a mom???

Well clueless Amanda, go raise your brat kids and make me a sandwich while you're at it.

How profound!!! I'll bet you received all A's in kindergarten.

Anyone stupid enough to wear this shirt, is a complete moron. I’m going to vote for someone who wants to kill me because I’m white. I don’t think so. 7:04, Sharice’s qualifications are, she hates white people and she’s a lesbian. She also doesn’t live in her own district. Her sorry, hateful ass will be run in November.

David’s goes back to the Lickaboe tribe. Eating pussy in a wigwam.

And then there’s the rest of the story. Every Lib I know can’t absorb a multi faceted topic. They grab on to one thing and that’s all they absorb. 7:04 you fit this bill, stupid fuck.

She can eat all the pussy she wants as long as she stays away from children, which I am guessing she can’t do. The shirt says something about her feelings toward people not of her persuasion.

and some of my heroes had to balls to wipe out alot of you redskins, girl if this was 300 years ago, you'd be running to the nearest white man eagerly taking up with him.

^^^ stupid. if it was 300 years ago you'd be an indentured servant eating left over pig meat with the rest of us.

The back of the shirt says "We invented Stand Your Ground before you great great grandparents got here".

there goes that election

Nah. More like "We were doing genocide and slavery before the White Man came to ruin the fun."

She should have worn a shirt that said “I Trade my Beaver for your Wampum”.

The Pussy Eating Pocahontas of the Plains.....

Instead of colonizers, if the shirt had said "Invaders" it would of been better understood, & more accurate. It's not really "colonizing" when there are people already there.

Of course, the Invaders didn't care that there were people already there, they just tried some ethnic cleansing. But Davids is supposed to be okay with that. Right? We tried to exterminate them.

But, yeah, let's be outraged that she's not willing to pretend that the invaders were the good guys, just because they were white. And how dare the locals try to resist the invaders with "Indian Uprisings". Don't they know that the whites think they're the Master Race?

However, you can't think that about yourself & be right!

People were already there, welfare fraud, engaging in endemic savage war and ethic cleansing with each other. That's ok though, according to you.

All of her heroes are violent killers? What a twisted set of values she has.

Amanda has now gone with Q.

Her ad has a clear message. She's a mom so she will protect the kids (compared to the Lesbo which we all know are sexual deviants and probably molests kids).

We get it. WWG1WGA. Sorry honey, that won't fly in JOCO.

Davids needs to take her desire to re-write history and kill colonists and shove them up her fat ass. That shit won’t play here.

Sharice Davids is a pathetic loser. I was in attendance at her gun control forum at the Matt Ross Center. She had a stacked panel of a bunch of gun control activists (a couple of MILFs from Moms for Action and some dinosaurs who still thought the U.S. military fights with the M-16). There was a group of Second Amendment dudes there (fat white guys who are politically clueless) who were pissed off that the panel was stacked 100% with gun control people (so much for a "conversation" on gun control - typical Democrat move to stifle free speech). After the panel was over, the Second Amendment dues swarmed around Sharice Davids and she was trying to placate these losers. Sorry, Sharice, you can't play both sides on this issue. At least Sharice is honest enough to say that while she is glad her ancestors killed white people, Sharice likes to eat out white JoCo pussy. Amanda Adkins is running a pretty decent campaign. Amanda Adkins is typical of trust fund kids who were born on Third Base and thought they hit a triple.

I love that t-shirt!

Doubt it. Another ultra intelligent post by the Chimpanzee.

I bet if I wore one that said kill BLM members or Team Rittenhouse. The Dems would scream like the little bitches they are. Her tee shirt is that offensive.

Dems get ready for yet another defeat when Amy Barrett is appointed. Your cowardly leadership will try to degrade her religion and you will be exposed for what you are, extremists. It will cost you more votes and you will lose control of all three branches because of your inability to control your nut-balls on the fringe. Cowards all of you!!!!!