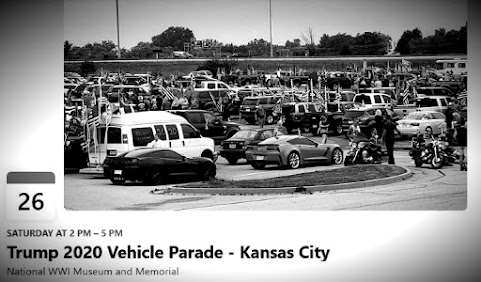 Culture war politics continues as we slouch toward the election. Right now we notice right-wing activists offering updates on a controversial event that's attracting a great deal of interest.

THE LATEST UPDATE FROM THE PREZ TRUMP VEHICLE PARADE: PO-PO WILL PROTECT THE FLAG WAVING PARADE!!!

This is probably a good idea given that notable resistance and criticism of the even we're seeing from the other side of the aisle.

Accordingly, here's the word from one of many social media pages promoting the increasingly well trafficked event . . .

"KCPD and other agencies will be present to make sure everything goes smooth. Roads around Liberty Memorial will be blocked off to make sure the departure into the parade route will be as smooth as possible. This parade is is on public roads and there will be a law enforcement presence due to the high number of participants . . ."

NTB: A bunch of Amish folks held a Trump parade yesterday with horses and cows and carriages and wagons

Forbes: A MAGA Militia? How The President’s Campaign Is Recruiting An “Army For Trump”

Pew Research: Few Trump or Biden supporters have close friends who back the opposing candidate

Wow. It's nice to read some good news for a change.

This isn't good news for Kansas City or anywhere else. A bunch of truck driving dipsticks from rural areas coming into town to start trouble is bad for everyone. Go buy a clue.

They probably won't be as loud all of the motorcycles every weeking.

Gonna drive that truck and let you smell the exhaust of freedom. Go buy a mask and hide. In your mama’s basement.

Hey @7:45! Our place is still nicer than your dirty underwear that stinks up your small rusted trailer. Fake tough guy, you'll be counting pennies to buy a hungry man dinner so you can watch it all on TV. You're no MAGA. You're a maggot. Sorry.

I will proudly be there and participate. I'm well equipped to defend myself. Trump 2020.

Will Lickass take a knee with law abiding adults ?

Once Trump wins in November, and puts another conservative on the court, I hope all you KC Commies come down here to Raymore.

Then we can shoot your asses while you're looking to escape the burned out shell of a city the "peaceful protest" types trashed, having trusted Mayor McKneely.


Cletus, Verne, Buford and the rest of us Ray Peckers want to go hogg'in with some of those fat Communist UMKC protester college girls ! They have nice big asses to hold on to for a wild ride!

I Stated this was going to be a GREAT SHOW. IT'S going to be a Trump landslide. Five people show up for a Sleepy China Joe Biden Rally. Tens of thousands to a Trump landslide Rally. Remember it's a Red State. And not just people from the Country support The Orange Man. Many people in the Metro .Look at the Results of the 2016 Election. CROOKED HILLERY DID NOT WIN IN MISSOURI. AND SLEEPY JOE has Less support then HILLARY,Clinton

Amen 8:25. 8:51, your mommy and daddy need to cut off your trust fund and get you out of their basement.

^^^ they own mayor mcdrinkerson so expect his hired terrorist thugs from blm and antifa to disrupt a peaceful event with violence and fake racist cries, I hope every trump supporter in the parade has cameras, go pros and phones filming the racist attacks and violence against trump supporters, you’ll see who the instigators are, I guarantee it.

Mayor lickass, you better be prepared to answer for your thug buddies causing violence and mayhem at a peaceful event, oh and cameras will be there so you can get your 5 seconds of fame on national tv! Hahahahaha!

China Joe Biden said if they would have let him out of his basement he would have sniffed the Chinese flu to death even through his mask !

Except for when China Joe was known as Ukraine Joe accepting bribes from the Ukraine, cheated to get through law school, accepted bribes from China etc.

C'mon Man, I gots on my Top Gun Aviator sunglasses from 1985.


who are you kidding, Ton? you love it.

the more locals are killed, the more you have to post.
the more exclamation marks you use.

I was at the Lake. Didn’t see one Biden banner. Nowhere. All Trump all weekend. Believe the Biden supporters were thinking of other conspiracy theories to unhatch at the gay bars in STL.

Joe Biden, 2020 candidate for something said...

Hide the women folk, the Ray Peckers are coming to town.

9:02-you should be glad anyone wants to come to this town. Kansas City is one of the most dangerous cities in the country.

Touch the handle on my door. It's unlocked. That's a threat to my personal safety. See what happens. Dare you. Don't mess with my truck.

Will there be looting? If so count me in.

Meet you at the Plaza fountain, peckerwoods. While you’re out waving your tiny cocks around KC streets ... I’ll be given’ your Mrs. the ol’ Liberal boogaloo! White Power, my ass. If it weren’t for viagra, you’d be a limp-dicked as your racist grandpappy out at John Knox Village.