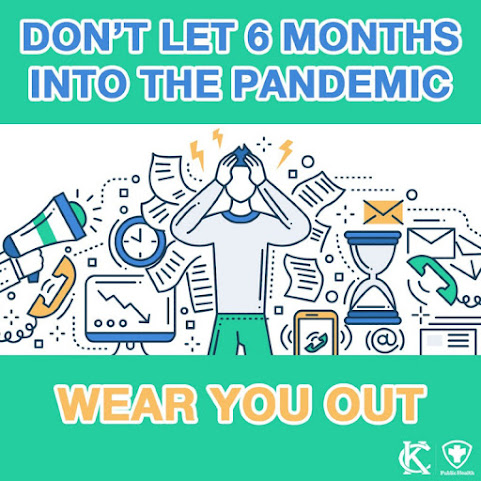 In a recent message, the Kansas City Health Department advocates vigilance and seems to suggest that the finish line of the pandemic isn't even close.

With the start of school in the metro, both virtual and real there's hope for a return to normal that hasn't been realized just yet.

Meanwhile, the threat from the virus along with the political and financial impact persists . . . Take a look:

NBC: Poll - Coronavirus fatigue may be setting in as more see pandemic as economic crisis

Biz Insider: Scientists fear the UK has 'lost control' of the coronavirus amid an 'exponential' growth in infections

CBS: 2nd wave of coronavirus could be weeks away, experts warn

The virus is real but that won't stop people from denying it. It's hard for people to understand something that's not right in front of their faces. Here's hoping that people at least wear masks and take some precautions just for the sake of students going back to school.

That would be nice but the pandemic is too politicized for that. Now the masks are just another argument about Trump.

Everybody is tired of Dr. Rex. Sorry, not sorry.

Archer is a panic stricken old man, he’s had his whole career to prepare for these types of occurrences and all’s he's done is freak out and scream that the world is coming to an end. Herd immunity maybe be the answer for the younger people and the healthy older generations. From 0 - 35 years of age have 18 deaths out of around 30,000 confirmed cases in Missouri.

With a vaccine nearly here the dimwits are already screaming they won’t take it, it’s too dangerous, it needs years and years of study before it could be deemed safe, they would rather all of us die than to admit Trump helped get a vaccine in nearly record time. I’m sick of all the violence, hatred and anti American filth coming from the dimwit party, they already said they will burn the country down when Trump gets re-elected and expect it to be ten times worse than it has been. The despicable dimwit party is the true disease in this country, they need to be eliminated.

Odd that Trump supporters like @6:39 scream about exterminating all Democrats in the name of "patriotism", isn't it?
Oh, and anyone who dares to demonstrate against the way the Country is being run should be jailed, then quietly eliminated, right?
But before that, all media that does not "toe the line" demanded by the President should be closed down.

Got news for you Bub, this is the early 20s, not the early 30s, and you're on the wrong side of the Atlantic.

It's all part of the "One Ring To Rule Them All" Progressive quest for total control.

^^^ The Democrats want you in the vat, right next to Keanu Reeves.

Then, they will go get their hair done and work out in Government gyms you are not allowed to attend.

Fauci can go to hell. It's obvious his advice was stupid from the start. First, he lied about the general public not needing masks (don't care about why he lied). Then he recommended all the shutdowns. If politicians didn't listen to Fauci, they'd be accused of causing more deaths, so they had to go along with this brainless twit.

It's not coronavirus fatigue. It's libtard brownshirt fatigue.

WEAR YOUR SLAVE MASK AND BOW TO THE PROGRESSIVE GODS WHO RULE THE HEAVENS AND DETERMINE EXACTLY WHERE THE CORONA WILL ATTACK!!!

OFFER UP A WHITE SACRIFICE TO THE GODS AND YOU CAN GO TO WALMART AND BE SAFE BUT NOT YOUR LOCAL RESTAURANT. ONLY THE DEMOCRAT GODS CAN DETERMINE IF AND WHEN WE CAN BE SAFE!!!!

THANK GOD FOR THE DEMOCRATS AND DR FAUCI WHO CAN PREDICT EXACTLY WHERE IT IS SAFE TO GO AND WHO CAN GO THERE!!!

DEMOCRATS LIKE THE MAYOR OF CHICAGO AND NANCY PELOSI WILL NOT GET THE CORONA WHEN THEY GET THEIR HAIR DONE. YOU WILL SO YOUR WIFE WILL CONTINUE TO LOOK LIKE A EXTRA FROM GREASE WHO HASN'T SHOWERED SINCE THE 80'S.

DEMOCRAT GOVERNMENT EMPLOYEES ARE SAFE AT THE GYM BUT YOU WILL GET THE CORONA AND DIE, DIE, DIE, DIE YOU IDIOT IF YOU GO THERE!!!!!

THANK GOD FOR JOE BIDEN HE WILL KEEP US SAFE FOR 4 MORE YEARS OF LOCKDOWNS AND SAFETY IN OUR OWN HOMES!!!!!!

Bandit for the win!

7:42 learn the difference between eliminated and exterminated, maybe you should buy a dictionary and learn words everyday. It will greatly enhance your life beyond your current kcps education.

Lying Democrats KNOW their is little to no danger from the virus and manipulate stats (More tests = more infections OMG!!!!) so they can wreck the economy, wreck your life and hopefully take control of the government to feed even more government parasites off of your salary.

If Pelosi, who is 80 years old, thought there was any real danger of contracting the virus, she would NOT be going out in public, meeting strangers at close range with no mask while getting her hair done. The government employees who live the high life, with full wages, paid for by we taxpayers, would NOT be going to gyms while the rest of us are locked down.

It's a disgraceful lie (Although democrats are way past shame and disgrace).

This is designed to humiliate and harm us in order to wreck everything in the run up to the election.

The Democrats could care less if you are on your last leg and can't pay your bills, they still have checks coming and they want power at any cost.

7:48 - why in the fuck does anyone give a shit that you voted for Obama? Why are Republicans obsessed with Obama?

As far as a vaccine, when fucking reputable Dr's say "here's a safe vaccine, take it" I will take it. Not when the fucking retard in the WH tells me to take it. It's pretty fucking simple for the normal people in this country. For Trumptards, it's not.

Posts with all caps, some dipshit posting about people who could care less....yep, fucking morons rampant on TKC this a.m.

Oh, and we've always been at war with Eastasia.
(For those of you who remember books.)

We remember enough to know that CNN is Minitruth. Thanks for playing.