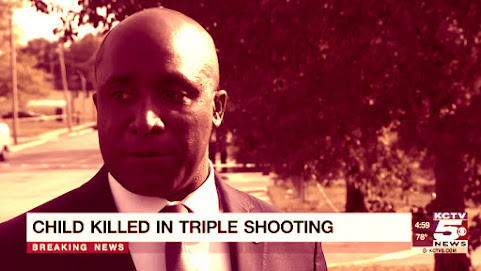 The level of violence in Kansas City has now started to spiral out of control . . . So much so that even Mayor Lucas seems choked up at the scene of this cowtown's latest brutal killing.

KANSAS CITY HOMICIDE #144 CONTINUES OUR HISTORIC SPATE OF 2020 MURDERS & CLAIMS THE LIFE OF AN INNOCENT!!!

"According to a spokesperson with the police department, four people were in a parked car when someone fired shots into it near 33rd and South Benton.

"Three people inside that car were shot, one of the victims was a child under the age of 5.

"The victims, one adult woman, one adult man and one male child, showed up at a fire station located at Linwood and Indiana with critical injuries. The child victim died as a result of his injuries.

KSHB: UPDATE - Child dies in triple shooting near Fire Station No. 18 in KCMO

Hell, the violence in KC has been historic for years. Now that stats are finally showing the reality.

So I guess Operation LeGend failed.

When does the protests start?

^^^
Good question. Obviously only if there's a suspect who was just turning around his life.

But we renamed a fountain and painted some slogans on the streets. How can this happen?

Mayor lickass promised he would end the violence, he failed because he is a failure. Why does he refuse to admit who the problem is and why won’t he stop it?

There will be no protest, black on black murder of innocent children isn’t the narrative the mayor and the lame stream media are looking for, they’re only interested in fake racism and blaming whitey for everything they’ve themselves have failed at in life.

Not sure if this is racism or black excellence.

I hope they catch these people who did this so that mean old Petersucker can threaten them with hard time only to give them probation after sitting in county lockup fro two years.

But wait, there’s more! Petersucker will institute a new rule where these thugs can get out of jail with no bond because.... it’s too mean to make them pay for bond.

It was the white supremacists right? Always is at least according to MSM.

The shooter had to be a previously jailed felon, had previously shot someone, was released early from jail, who was prohibited from gun ownership. That kid will be waiting in the afterlife for the shooter to die someday, so justice can be served!

If I am ever murdered, I will spend each second after I die, planning ways to torture and make the shooter and his family suffer someday. Time will be on my side! They will see me seconds after they die and be terrified!

Q Ball is killing Kansas City as is the board. Shameful people doing a pathetic job.

Didn't the street murals put a stop to all of this senseless violence? What is going on?

Yep, a few extra cops can change a sociopathic shooter. Grow up and get your head out of your own backside.

Sad for the family of the child.

However, when is Mayor Lucas, BLM, Patty Cakes, Klark Kunt, the NFL, and CNN going to support the police to end the murdering of innocent people.

They are all playing politics with people's lives and safety.

Support Marxist BLM and the Marxist Democrat Party obviously is not the answer.

It's all about posturing themselves politically to maximize their personal wealth.

We need to allow lynch mobs access to murderers. Bring back death by slow roasting at the stake or dying while suspended in metal cages hung up on poles. Release all murderers in the USA right now to lynch mobs. We would cut the murder rate by 95% across the USA. Its them....or us.

Lucas could care less he just wanted to look good in the cameras for the folks in Washington. You don't march and protest with BLM thugs and then act like you're shedding a tear over another child being murdered in whats supposed to be your streets Mr Lameass Mayor.

I hope all you fuckers that voted for this POS are real happy with yourselves.

Lets band together and get this fool recalled before the whole town goes to hell more than it already has.

We need a mayor with a huge set of balls that will see to it this taking over of the streets by hoodlums has to come to an end. We need someone like retired Milwaukee County Sheriff David A. Clarke Jr. to come to KC and kick some ass.

Can we start putting blood red Xs in the street at these numerous murder locations ? Be a more effective way to spread the word than six Marxist racist street desecrations.

Black vs Black... yeah, those Black guys really stuck it to the White man by killing other Blacks. Blacks are, in fact, the biggest promoters of White Supremacy. BLM... just not to Black people. Im sure this little dispute was over something petty and meaningless.

Don’t worry Major Doug Niemeier will save the day. He has done such a great job in East district. Sorry fake news, no really he’s a douche. Please get him the fuck out of our neighborhood. He is horrible and has done completely nothing. The community relations have been tremendously hurt with that fucking idiot. I was told he calls himself the governor. What the fuck, this guy needs to go. Don’t fire Chief Smith, make him come back to East, he did a good job when he was here. Just get Governor douche bag out of this neighbor.

What Quinton Lucas will never understand is that there are negative
consequences for publicly locking arms with those who would dismantle the KCPD and the strong rule of law which is central to a functioning civil society. The only logical choice is to maintain a strong and swift law enforcement/judicial system which holds citizens accountable for their actions!!!

When are the mothers going to speak up?

Facts: 17 bullet holes in the vehicle

How much longer are you going to turn a blind eye and remain silent?

The muthas did speak up. That's why Kansas Shitty has graffiti street "fart" that didn't hold up any longer than most of those involved have held legitimate employment. 😏


You liberals put a weak cowardly racist black radical in charge of the city. It's what you created so stop complaining and live with what you have done.

Its so sad. But we will have over 600,000 dead amercians from Covid before is goes away. The Chinese might as well have dropped a atomic bomb on a smaller city. 600,000.