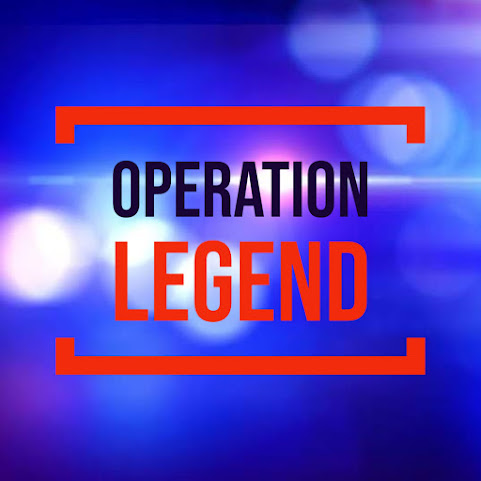 In addition, the Bureau of Alcohol, Tobacco, Firearms and Explosives (ATF) has seized 587 firearms, more than 1.2 kilos of heroin, and more than five kilos of methamphetamine; the Drug Enforcement Administration (DEA) has seized almost 70 kilos of methamphetamine, more than 16 kilos of heroin, more than 7 kilos of fentanyl, more than 12 kilos of cocaine, 268 firearms, and approximately $5.19 million in drug proceeds; the FBI has recovered 241 weapons; and the United States Marshals Service have recovered 169 firearms and made 1,810 arrests, including 163 for homicide and 120 for sexual assault.

The Attorney General launched Operation Legend on July 8, 2020, as a sustained, systematic and coordinated law enforcement initiative in which federal law enforcement agencies work in conjunction with state and local law enforcement officials to fight violent crime. The initiative is named in honor of four-year-old LeGend Taliferro, who was shot and killed while he slept early in the morning of June 29 in Kansas City.

113 defendants have been charged with federal crimes outlined below.

- 34 defendants have been charged with narcotics-related offenses;

- 68 defendants have been charged with firearms-related offenses; and

Kc needs this to be a year round effort. Hopefully it will stop the murders.

Looks like Obamas,Friends that are Untouchable. Are not being arrested, But are loosing millions of dollars. The one's at the Top seldom are held accountable .YOU HAVE THE FALL GUY.

Good for the Feds stepping in and doing what the feckless locals should be doing.

There is no question that Donald Trump will be reelected this November - hasn't he spent two years telling us all that this Election was "rigged" and would be the "most corrupt in US History"?

seems to have been a good idea after all.

Seems about the right time for Gwen Grant and the others who marched around and protested the feds coming to town to help and accused them of being "an occupying force" to offer a public apology and admit they just were stuck on the tired old narrative that they've regurgitated for years and were more interested in their own self-importance than they were in doing something serious in response to the murder of a four year-old boy.
Who will be the first of the local "reporters" to call them out?
Come on!
Aren't there ANY actual investigative journalists in town?
Sad.

But no arrest on the Horseless Carriage car dealership shooting at 16th and Minnesota? 1 dead, 6 injured, during a party with 300 attendents? Let those cartel kingpins walk, cause maybe they will snitch on their competition!

this is a lie

where is the list of names of people charged

Without a doubt #MAGA