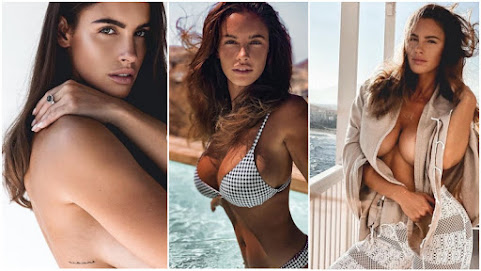 California has really been hit hard with the wildfires this summer. So far this year, fires have burned over 3.2 million acres, destroyed over 4,200 structures and killed 25 people, according to California's Department of Forestry and Fire Protection. The August Complex fire has burned 877,477 acres, making it the largest in the state's history!


The Coronavirus Pandemic Is Driving Food Insecurity Among Young People

Now, as many as 18 million children may be food insecure, and 38% of students at 4-year colleges said they have experienced limited or uncertain access to adequate food since the coronavirus struck.

Kansas City Mayor Quinton Lucas spent Monday night in Jefferson City at an event where attendees ignored social distancing guidelines meant to curb the spread of coronavirus - even as Kansas City remains under a mask mandate. Lucas attended the Missouri Times "30 Under 30" event.

Lucia Javorčeková stunned many of her 1.7 million Instagram followers on Sunday, September 13, with her latest share. The Slovakian bombshell took to the social media platform to upload a sexy image of herself in which she oozed confidence and sex appeal while wearing an open shirt and a bikini bottom that showcased her feminine figure.

The October issue of Scientific American will carry what has never been seen in the magazine's pages in 175 years: a presidential endorsement. In an urgent and impassioned editorial first published online Tuesday, the editorial board endorsed former vice president Joe Biden, the Democratic nominee, calling him the candidate "who is offering fact-based plans to protect our health, our economy and the environment."

CNBC host Jim Cramer called House Speaker Nancy Pelosi "Crazy Nancy" to her face during an interview on Tuesday morning - a taunt for the California liberal typically used by President Trump. The outlandish host of "Mad Money" and former hedge fund manager was interviewing Pelosi on stalled negotiations on a fourth coronavirus stimulus package when the insult appeared to slip out.

A divided federal appellate court allowed the Trump administration on Monday to move forward with plans to terminate several humanitarian programs that shield hundreds of thousands of immigrants in the U.S. from deportation.

USA Chokes On It


The Western US has the worst air quality in the world, group says

Three major US cities being wreathed in smoke from massive wildfires now have the worst air quality of any big cities in the world, according to a monitoring group.

With social distancing guidelines still in place, a constant flurry of openings and reopenings and mask wearing at an all-time high, the COVID-19 pandemic is anything but a thing in the past. The upcoming month of October will be particularly brutal for beer lovers. Why?

KANSAS CITY, Mo. - Kansas City Royals pitcher Danny Duffy won't make his scheduled start on Tuesday night against the Detroit Tigers after missing the team flight. The Royals are aware of the incident that caused him to miss the team flight and are investigating.


Warmer Wednesday on the way

Hide Transcript Show Transcript BRYAN: A LITTLE BIT OF HAZE OUT THERE. IT'S NOT HELPING THE AIR QUALITY. BUT RAGWEED SEASON. SKY CAST IS LOOKING LIKE IT'S GOING TO BE IN THE MODERATE AREA AGAIN FROM THE FIRES RAGING OUT WEST.


Western United States of Marxist Democrat controlled California, Oregon and Washington have the worst air quality in the world.

Way to go Marxist Democrat Party; your policies give you the distinction of being the worst 3rd World territory in the World !!!

^^^ Great. Still not going to vote for Trump.

The Marxist Democrats claim to be "Green" but they sure don't put their money where their mouth is to protect the forests and clean up the underbrush to prevent catastrophic fires.

Look what Marxist Nancy Pelosi has done for California. It's burning up !!!


The Marxist Democrat Party diverts taxpayer funds from road repair, water and sewer infrastructure to their own greedy pockets !!!!!!

Sorry, all that sounds dumb.

And I'm not going to vote for Trump.

^^^ You're right the Marxist Democrats are dumb that is why there are catastrophic forest fires in California and Oregon and crime is out of control in Democrat Party controlled cities.

Look at KC spending their budget on street murals, empty hotels, street car and other worthless endeavors while the water is rancid, pipes are bursting everywhere, the smell of sewage permeates downtown, roads are pock marked with potholes and record breaking homicides.

Couldn't agree with you more; the Marxist Democrat Party is beyond stupid.

Joe Biden was already dumber than a box of rocks before dementia set in last year.

It appears Basement Joe Biden got lost in a wheat field.

Who's he talking to cows ? Boll Weevils ? Armadillos ? Himself ?

the keys not in the ignition is not the intent of the law.

I don't know if Jim Cramer has the creds to call anyone crazy. I used to watch his business segments on CNN, and he never met a losing stock he didn't hype.

Crude @8:00, but absolutely correct.
"Law" is what is enforced, nothing more, and nothing less.
When the primary Law Enforcement Agency in the Country is co-opted by a leader who perverts its function solely into a re-election vehicle for the would-be "Dickless Tater" he has sold his soul to, one cannot expect "respect for the Law" to thrive, or even to survive.

I voted Democrat and still shall, for Senate and House. But shall vote for Trump for president. It's called INDEPENDENT.
MAGA!!!

Biden is a head on a post. When they need him to perform they inject adrenaline into his heart to make him appear more lifelike and coherent.
Another possibility is the dementia is due to syphilis. Similar to what happened to Woodrow Wilson, and his wife controlling the executive branch in his final days and beyond.
In any event, I suggest buying gold, silver, and ammo, in that order. Ammunition is in short supply, start to worry when you can't buy gold and silver.

and yet STILL not voting for Trump. Weird.

Ok then don't. We won't need your one vote that you were never goung to give him under any conditions.

^Umm...Sorry, I'm not voting for Trump either. Not sorry.