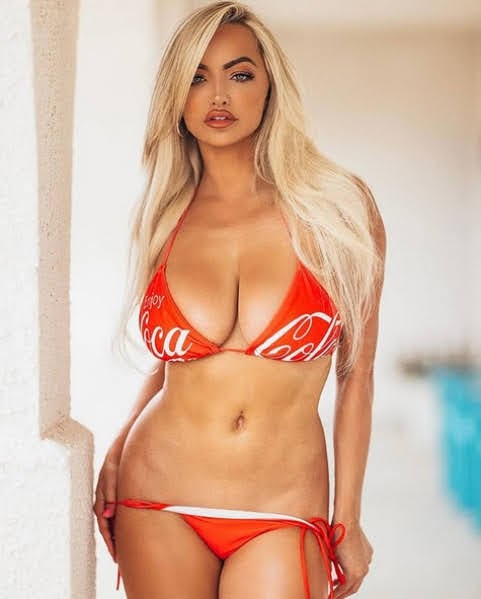 In her latest post, insta-hottie Lindey Pelas declares, "It's been a while since I spiced this sh*t up." And then seems to offer a stunning juxtaposition betwixt commercialism and the female form which inspires our morning fair use peek at pop culture, community news and top headlines for purposes of education, parody and public education . . . Not just titillation.


After deadly summer in Kansas City, community leaders make a push for prevention

KANSAS CITY, Mo. - One of Kansas City's most violent summers is winding down. Police statistics show the murder rate in the city has been near an all-time high in 2020, and now, social activists are seeking ways to restore peace. Crime totals from the summer months tell an unfortunate tale.

RAYMORE, MO (KCTV) - Two Raymore-Peculiar High School students and one Raymore Elementary School student have tested positive for the coronavirus. The District said they have contacted anyone who was potentially exposed and needs to quarantine related to these cases.

KANSAS CITY, Mo. - Patrick Mahomes' foundation is helping out child care workers that have been hard hit by the pandemic. Turn the Page KC and 15 and the Mahomies Foundation donated $15,000 each to help establish a hazard pay program for early childhood educators.

CGI Is The New Hotness

SHE has modelled for Prada, Chanel and Calvin Klein, shared a kiss with Bella Hadid and amassed more than 2.5million loyal followers on Instagram. Yet picture-perfect Miquela Sousa, 19, isn't your typical celebrity influencer - she's actually among a growing army of ROBOT Insta models being snapped up by designer brands.


Biden Is Outspending Trump On TV, And Just 6 States Are The Focus Of The Campaign

Where the major party presidential campaigns are spending their money on TV advertising can tell you a lot about where they're focusing their efforts. And based on that, it's pretty clear that the race between President Trump and Joe Biden is coming down to just six swing states - Florida, Pennsylvania, North Carolina, Michigan, Wisconsin and Arizona.


President Nancy Pelosi? Don't underestimate what she might do in office

About one month ago, during a speech to the 2020 Council for National Policy, raised the possibility of House Speaker (D-Calif.) succeeding him as the next president of the United States. Said Trump: "I really don't think that you are going to know anything on the evening - anything meaningful or anything real - on the evening of Nov.

A reported threat against the U.S. ambassador to South Africa raises the specter that Iran will seek to use a high-profile terrorist attack or assassination to upend the 2020 presidential election, according to U.S. analysts.

Several immigration advocacy groups filed a complaint on behalf of a whistleblower nurse to the Office of the Inspector General on Monday, alleging "jarring medical neglect" and a lack of COVID-19 safety precautions at Irwin County Detention Center in Georgia. Among several charges of negligence, the complaint describes reports of high rates of hysterectomies performed on Spanish-speaking immigrant women.

President Trump will preside over the signing of two historic deals between Israel and two Gulf nations at the White House on Tuesday -- a ceremony that will burnish Trump's foreign policy credentials as he seeks reelection. Israeli Prime Minister Benjamin Netanyahu will sign deals marking the normalization of relations with both the United Arab Emirates and Bahrain.

Symphony string trio to serenade outdoors on Tuesday The will feature a string trio performing an evening serenade at 6:30 p.m. Tuesday atop the Kansas City Symphony Central Library parking garage. The performance is part of a Symphony's series of free outdoor chamber concerts.

ALBANY, N.Y. - Kansas City's favorite actor and the governor of New York have teamed up in a goofy new video with one underlying message - "Wear a mask." The video, posted to Gov. Andrew Cuomo's YouTube page and Twitter account on Sept. 14, already has nearly a quarter of a million views and 112,000 favorites, respectively.

Pleasant and dry weather this week with lots of sunshine each day Clear skies and cool temperatures each night Highs warm to the mid 80s by Wednesday, cooler and less humid after a late week cold front KANSAS CITY'S MOST ACCURATE FORECAST Monday: Sunny and comfortable with temperatures close to normal.


Stop with the crime protests. This is the mayors job and he's not doing it. Focus on getting him recalled. He's leaving it to the people to handle and that's not the people's job. Tell this mayor and prosecuter to get off of their asses and do their job. If you vote them in again then the blood is on your hands.

Patrick Mahomes had done NOTHING. Learn what a foundation is and how much money from a foundation goes to the cause. Mahomes is only required to pay 10% of what he takes in the amount is up to him. So out of the 15K how much did he take in. Foundations are a get rich quick scheme.

I didn't like him either when he was running but I'm all in now. Anybody that drives the libtards and the establishment this far over the edge has got my vote. Thanks Demonrats!
🤣🤣🤣🤣🤣🤣🤣🤣🤣🤣🤣🤣🤣🤣🤣🤣🤣

I Can’t Stand Trump. But Dems May Force Me To Vote For Him.

^^^ And in another "personal best", on Saturday Donald Trump uttered a fact-checked FOUR LIES IN ONE SENTENCE!
He is now well over 20,000 proven lies -an all-time record - he may now have exceeded any other World Leader.

You have to hope that Mahomes has at least some adults around him that can help him try to understand how others are trying to take advantage of him for their own selfish interests and that he really needs to understand that, at the rate he carelessly is committing money, even his seemingly endless supply of it will run out way before he thinks.
A twenty-something beer mind driving a champagne bank account is a really bad idea.

Libtards showing their true colors was so long overdue. They've proving everything that I've said about them for decades to be true in less than six months for all to see. Amusing as hell to watch. Yup. They're winners ain't they folks?

^^and yet mahomes has done more than any of you busted, broken, bitter, geriatric fucktards. He's been a terrific person for our community and he's the best player in football.. Weird.

^^and you chuckleheads do, as you seem to comment about him everyday! Busted. Owned! Now get your shinebox! Bitch. Weird.

^^and he's STILL the best thing on this blog. Weird.

^and yet I would rather read a whole blog of just him rather than one of yours. Truth. Weird.

Hey Chimp, nobody gives a shit what you would rather do.......

^^and yet YOU do. You cared enough to comment. Owned. As usual. Living in your head-rent free. Weird.