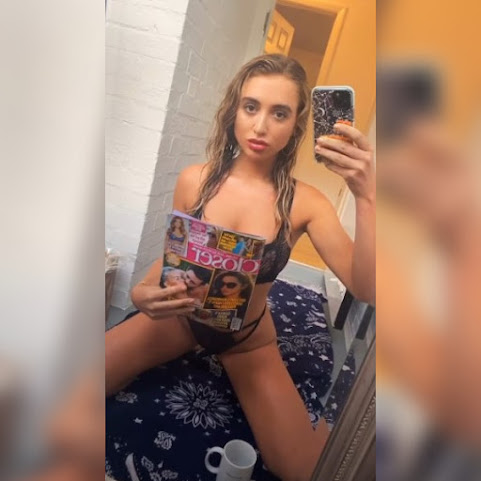 Right now 25-year-old hottie Georgia inspires another look at local news for closer readers of this blog; and so we take a peek at pop culture, community news, top headlines and more . . .

KANSAS CITY, Mo. - Hospital leaders from the Kansas City metro are concerned about the COVID-19 pandemic going into fall. Chief medical officers from a handful of hospitals will hold a virtual briefing Wednesday to discuss the status of the pandemic in the region.

American Airlines, Frontier, and Air Canada will offer international flights from KCI beginning this fall, in the wake of catastrophic losses due to COVID-19. In Kansas City and elsewhere around the country planes are beginning to fill, but at its worst in April, commerical flights in the country had dropped by 77 percent.

Masks Made In America

KANSAS CITY, Kan. - Many people are stepping up to help keep everyone safe during the pandemic. In this pay it forward, one woman does it one mask at a time. The pandemic has been especially tough for non-profits like Hopeprint, which seeks to empower diverse families and provide immigrants with resources.


Georgia Harrison: 'I feel so much more confident with my new boobs'

She was very much the IT girl when TOWIE first started in 2010 and now she's confirmed her comeback on Instagram. "'TOWIE 10 is coming, it's time to get back to Essex' .... IM BACK 😝 @towie," she wrote. CREDIT: Getty Let's be honest, it wouldn't be right to have a TOWIE reunion with Joey Essex.

NPR was strongly criticized Tuesday after it claimed that President Trump had "no evidence" that Kyle Rittenhouse, the 17-year-old who shot three protesters in Kenosha, Wis. last week, acted out of self-defense. "You saw the same tape as I saw," Trump said during a White House press briefing on Monday.

President Trump and his doctor on Tuesday denied that he suffered a stroke last year ahead of a mysterious visit to Walter Reed Medical Center. Dr. Sean Conley issued a statement after claims swirled on Twitter, without any apparent evidence, that Trump had suffered a stroke before the November 2019 visit.

Campaign 2020 Closer Than Anybody Wants To Admit


US refuses to join international effort to develop Covid-19 vaccine

The US government has said that it will not participate in a global initiative to develop, manufacture and equitably distribute a vaccine for Covid-19 because the effort is co-led by the World Health Organization.

Local live event workers and performers will be lighting up buildings downtown and around the city in the color red on September 1st. The buildings awash in red light will be to raise awareness for a movement called #REDALERTRESTART. The RESTART bill that will fund small businesses and the live music industry due to COVID-19 cutbacks.


Temps will be in mid-80s for your Wednesday

Hide Transcript Show Transcript MONKEY -- MUGGY BUT BELOW AVERAGE TEMPERATURES. SPOTTY SHOWERS AND MAYBE ONE THUNDERSTORM. OTHERWISE MOST AREAS REMAIN DRY. WINDS TURN WEST AND NORTHWEST ONLY FIVE MILES PER HOUR. TEMPERATURES BELOW 80 DEGREES AND BY 9:00 P.M. WE WILL BE AT 73 AND BY 11:00 TO 69 WITH PATCHY CLOUDS.

The only claim that does not have any evidence is that the Kenosha shooter supposedly armed up and went into Kenosha as some sort of vigilante or violent white supremacist. There is not evidence for that claim. The video evidence shows self-defense.

Someone threw a can of soup at Kyle, he got scared and started shooting.


Masks around the city are FREE so for this women to make masks for immigrants in that or any community is RACIST. Any store that you go into and don't have a mask they will give you one for FREE. Mine tore when I was in Walmart and the gave me a free one and so does the half price books and costco and so on and so on. So can't this women make masks for everyone why just immigrants? RACISM in your face and that's SICK!

^^because you're a racist and nobody wants to do anything for you. That's why.