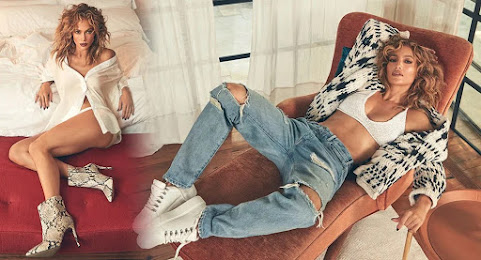 Right now we're impressed with 51-year-old hottie J-Lo still showing offer her amble backside for the most discerning brands. And all of THAT has inspired this quick review of pop culture, community news and top headlines right now.

How Do You Vote In Kansas City When You Don't Have An Address?

Hope Faith Homeless Assistance Campus in downtown Kansas City, Missouri, is a daily drop-in center for people experiencing homelessness, a place where they can get meals, take showers, get supplies, and healthcare. This election year, they're providing another critical service that the homeless don't have: an address.

The $193 million Johnson County Courthouse now is virtually complete, with a planned public opening set for Jan. 4. Construction on the 356,821-square-foot, seven-story building in Olathe was considered substantially complete as of Aug. 21. The new courthouse is located at 150 W.

KANSAS CITY, Mo. - The Chiefs Kingdom has yet another thing to be proud of after making ESPN's top three NFL stadiums! Arrowhead Stadium may not have the outlandishly large video boards of the NFL's newest stadiums, or the history of the Lambeau Field, but it does have smoke - and that was good enough to rate it among the top stadiums in the league, the Kansas City Business Journal reported.

Trump booed as he pays respects to Ginsburg at court

Emerging at the top of the Supreme Court steps on Thursday, President Donald Trump heard something he doesn't often hear -- at least directed toward him: booing.

Leading Republicans have sought to quell fears that Donald Trump could stoke violence in an attempt to cling to power if he loses the US presidential election - though they stopped short of rebuking Trump directly. The president sparked fresh anger and disbelief on Thursday after he refused to commit to a peaceful transfer of power.

House Democrats are preparing a new, smaller coronavirus relief package expected to cost about $2.4 trillion as they try to forge ahead with talks with the Trump administration, a source familiar with the plans said Thursday. The bill would include enhanced unemployment insurance, direct payments to Americans, Paycheck Protection Program small-business loan funding and aid to airlines, among other provisions, the person said.

The FBI said it is continuing its investigation into Breonna Taylor's death, separate to the Kentucky Attorney General's probe Federal authorities said it is looking at 'all aspects' of her fatal shooting and will determine whether federal criminal charges are warranted The investigation is being conducted by the FBI's Louisville

WASHINGTON - Sen. Dianne Feinstein, D-Calif., the top Democrat on the Senate panel that examines potential Supreme Court judges, acknowledged Thursday she did not have the power to block President Donald Trump's nominee from passing through the Republican-controlled Senate.

KANSAS CITY, Mo. - Missouri Gov. Mike Parson said Thursday he "feels healthy" while his wife, Teresa , continues to experience only mild symptoms after both tested positive for COVID-19 . State officials announced Wednesday that the governor and first lady tested positive for the virus, which has killed more than 2,000 Missouri residents during the last six months.


Get A Good Enough Garmin Gig

KANSAS CITY, Mo. - Garmin International, the growing global company with almost 15,000 employees based in Olathe, Kansas, is looking for dozens of new employees. If you are looking for a new career, your path could begin at Garmin. Not every job requires applicants have a degree and you could get help earning one on the job.

Kansas City Fashion Week: The show goes on, but in a safe (and virtual) way

KANSAS CITY, MO (KCTV) -- Kansas City Fashion Week usually plays host to packed crowds each year at Union Station. But with the COVID-19 pandemic, organizers knew they had to do something different this year. Reporter Savannah Rudicel talked with Fashion Week leaders and designers about how they kept the runway shows while ditching the danger: KCTV5.com is now with you on the go!

Right Arrowhead is the best due to meat. They go out and beat each others meat right in front of everyone.

Parsons is feeling healthy. For now. He was just diagnosed. What a fool.

I would still get on J-Lo and screw her deep and hard, even if she is old.

Lying on her back, legs spread, is a pretty familiar position for ol' J-Lo. You go girl!

Dianne Feinstein is 87 freaking years old. She doesn't have the power to get wet if she tried having sex much less barring Trump's nominee. Retire old lady and move in with Gloria Alred.

167 years..... nancy peelousy and Diane Feinstein’s ages added up. No wonder nothing gets done in Washington, it takes them a month and a half to go to the bathroom! Hahahahaha!

These geriatric Democrats should retire but their egos won’t allow them to. RBG really put the screws to the Libs. Karma is a bitch.

I don’t think it is ego only keeping those old hags in Washington. I mean, would you rather stay in Washington or go back to a gay-infested shithole like San Francisco where people shit on the sidewalks?

^^^ Still nicer than your trailer park.

About as nice as your zoo.

I am a Staff Author at FieldEngineer.com a Marketplace for On-Demand telecom workforce, extending from field engineers to high-level network engineers, project managers and Network Architects in 146 nation