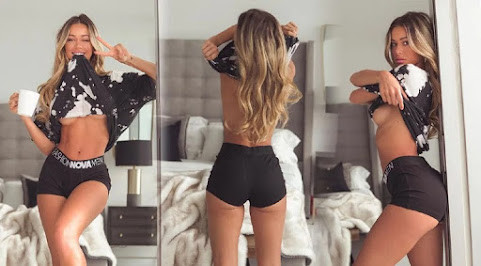 Quick news peek for our most dedicated readers . . . Hottie Cindy and her Fashion NOVA promo body of work inspires us to take a glimpse at this collection of community news, pop culture and top headlines.

The Ale House in Westport remains closed after being shut down earlier in the week by the Kansas City Health Department after some employees tested positive for COVID-19.

As part of national clean-up day, mayor Quinton Lucas stopped by Troost Lake Park to do some cleanup and pick up trash. Lucas stressed the importance of the parks ambassador program. The parks department , like many city departments, is cutting budgets and possibly cutting mowing schedules, Lucas indicated that this program was vital to keeping Kansas City's Parts viable and usable.

OVERLAND PARK, Kan. - Blue Valley High football players came running onto the field through a banner that looked like a mask, which said, "The mask we have all been waiting for." It was a nod to the rallies of athletes and parents chanting, "Let them play!" The district initially postponed fall sports.

It would be easy to ignore the story of Jim Tyrer, one of the greatest Kansas City Chiefs, who died by suicide after taking the life of his wife. It would be lazy to simply dwell on the salacious aspects of his story.

Garment workers, paid by the piece, say they'll fight to change the system

California garment worker Santa Son had hoped this was the year the state Legislature would end a system that pays her and other workers for the number of items they make - not the hours they work. Some days, her job is to stitch tags or labels for clothes that carry the proud slogan "Made in America" or "Made in LA."

TikTok and WeChat bans could come back to haunt U.S. companies, experts warn

The Trump administration's decision to ban TikTok and WeChat could set a dangerous precedent that adversely affects U.S. tech companies and accelerates the balkanization of the internet, tech executives, public policy officials and other experts warn. The bans, which would effectively eliminate WeChat's presence in the U.S.

President Trump said Democrats and the mainstream media should be celebrating getting a coronavirus vaccine "in record time," but instead they're creating a "terrible situation" because of the election.

House Speaker Nancy Pelosi on Friday reiterated her hard-line demand for a $2.2 trillion coronavirus relief package, snapping at a reporter who asked why she would not support a smaller bipartisan bill introduced earlier in the week.

KANSAS CITY, Mo. - A Blue Springs man has his wife, doctors and an organ donor to thank for saving his life. Jeff Blobaum is one of 23 people who underwent heart transplants at Saint Luke's Hospital this year. The hospital is celebrating its 35th anniversary of the first heart transplant performed.

In a story that defines Danny Duffy's biggest struggle as a professional, he was given an early lead and couldn't hold on, blowing a 4-0 advantage with a meltdown inning. The end result was a 9-5 loss to the Milwaukee Brewers.


Stepping Up For Good Cause

BELTON, Mo. - A Wisconsin man, running cross country to raise awareness about the need for childhood cancer funding, is spending the weekend in metro. Peter Halper is a little more than halfway through his run across the United States, which started in July. His mission: "3,100 miles from Dana Point, California to Delaware," he [...]

Mostly sunny Saturday with high near 73

Hide Transcript Show Transcript CLINTON. LATER TODAY, OUR HIGH TEMPERATURES WILL BE COMFORTABLE. THESE ARE NUMBERS BELOW NORMAL. NORMAL SHOULD BE AROUND 78 AND WE ARE FORECASTING 73 DEGREES TODAY IN KANSAS CITY. YOU CAN SEE WE WILL HIT THAT HIGH AROUND 3:00.

She looks so good in that purple thing draped over her delicious body.

Speaking of Blue Spring you should go check out the Blue Springs Community Awareness Facebook group today where you'll see a school board member soliciting funds to pay their legal fees for their lawsuit against the county.


If Lucas thinks going out and cleaning up northeast is going to help his tarnished reputation he better think twice because it isn't going to work. Fix the holes in the streets Lucas stop acting like an idiot, even though I know that's hard for you to do.

WTG Q! I love that he is always ahead of the haters and actually doing things to improve the community for everybody.

Some racists are so put out by his success that they are leaving.

@4:34 Secret crime plan? It must still be secret because crime and murders are through the roof. What planet are you living on?