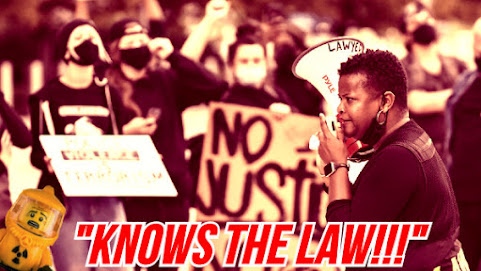 Today, local legacy media engaged in a fascinating conversation with a rising star activist our blog community noticed months ago.

Let's make it plain: Critics might disagree with Ms. Shaw's politics but there is no denying her bravery. Whilst most of the nation hunkers down behind keyboards to expresses various levels of outrage about the current state of American politics whilst ordering UberEats and lining up pr0n videos for later enjoyment . . . Ms. Shaw is fearless in her street level constitutionally protected activism. Her fiery rhetoric has inspired local progressives across demographic lines and her following of social media loyalists rivals that of any cowtown celebrity propped up by legacy news outlets.

Haters and trolls send nothing but veiled & overt threats her way but there is absolutely NOBODY willing to debate her political opinions in a professional manner.

And whilst the public might crave an honest exchange of ideas with Ms. Shaw, this afternoon a journalism professor mostly fawned over the upstart local protest leader in a softball interview that might as well have ended with an autograph.

"She discussed her background and motives for helping lead recent Kansas City demonstrations over the Kentucky attorney general's announcement that none of the officers involved in the killing of Breonna Taylor would be charged with her death."

Again, this profile interview was mostly devoid of any tough questions . . .

If anything, we thought Professor Kraske was going to ask to hold her megaphone or take her bulletproof vest to the dry cleaners.

Again, TKC doesn't have a side in this fight because Latinos have largely been forgotten in this election even if they're likely to help decide the outcome under the radar - As always.

Nevertheless, whilst ignoring reactionary hateration from drunk uncles, more serious questions have emerged for Ms. Shaw . . . Like this one . . .

HOW CAN AN OFFICER OF THE COURT REPEATEDLY LEAD AND PARTICIPATE IN PROTESTS THAT RESULT IN ARRESTS & CLASHES WITH POLICE?!?

Last night's protest was a perfect example of this phenomenon as police captured about a dozen protesters whilst media played down the ruckus inside the loop as "mostly peaceful" for audience that seem weary of continued American civil unrest.

Again, there is no doubt that Ms. Shaw "knows the law" and she's more than capable of answering this question with her usual flair . . . The problem here is that local media seems too scared to ask her any critical questions about her controversial tactics. The reality is that this attorney is exceptionally courageous but, sadly, her progressive fan base would rather offer empty pleasantries than realize the very real risks confronted by this local attorney.

Nobody asks questions anymore. It's rude.

Better to just podcast in support. It works and keeps "the discourse" going.

Also, I think you are underestimating some of the questions. There weren't any heated moments BUT at least it's a conversation that somebody is having without all of the social media garbage.

push our Democrap-led town even FURTHER down the tubes

She's a clueless self-important rabble who shamelessly takes advantage of low and no-information children to advance her own celebrity.
What ever happened to Justis Horn, the last self-appointed BLM "leader"?
And what about Gen Grant's farcical protesting about the Operation LeGend feds "occupying" the community?
These fake grass roots "movements" drift from one make-believe issue to another and the infighting over who's the most important and who might get some bucks gets worse and worse the longer they go on.
BLM has accomplished nothing and won't going forward.
Stay's 15 minutes of fame has passed and no one is paying any attention except for the pitiful local media.

Ctazy Stacy, the terror of the Walmart return counter. What a self-important clown.

Some lawyers try to get people out of jail. Apparently MS Shaw excels in getting people put into jail. Interesting business models

She is a heifer! Disgusting piece of wasted flesh! And who the hell gave her a law degree??? Walmart?

"Officer of the Court." That is the most stupid description of scumbag lawyers I have ever heard. Unfortunately, even judges use the term.

True. Maybe it's time to put an end to that kind of fake "respect" for people who don't give it in return.

yea ok, what you prove shaw? go over to louieville and offer your services, or does the account of what happened not congeal with what you wanted it to happen, if so then you better go talk to witnesses again and get them to change it to what you wanted to happen. Then you can run your greezy ass up and act like you're the greatest freedom fighter while your city, your peoples are going to set the record on killings. afro mericans cant stop themselves from killing themselves, but they sure love to shame whitey and coppers when a negroe dies in their vicinity. even if it was their own damn fault.

Holy crap Stacy Shaw is a she/her. This whole time I thought that was a dude

Is this Stacy Abram or Stacy Shaw. They both eat way too much. Anything within 100 feet is fair game. She can eat animals, small children, cars, pussy, dead black people, trees, Sharice Davids’ bush, Covid.....the list goes on. Disgraceful him being.

With every protest she is starting to look more and more like George Floyd. This bitch got hit with the ugly stick.

You know who does traffic law? Loser lawyers who barely graduated and squeaked by the bar exam.

Where did Stacy Shaw come from? St. Louis

Did she leave behind a checkered history there, including personal relationships, financial troubles, and employment trouble? Bingo

Ms. Stacey is in the business of shameless self-promotion. Who can blame her? Maybe she thinks she's the next Angela Davis.

Let me borrow the words of councilwoman shields......”stupid bitch” While shields wasn’t speaking of Shaw, the words fit

They are celebrating the fact that they don't have to feed that cow.

The racism is ripe with contempt tonight. Someone's got to take the lead but getting people arrested will only force them to not engage with activist causes.