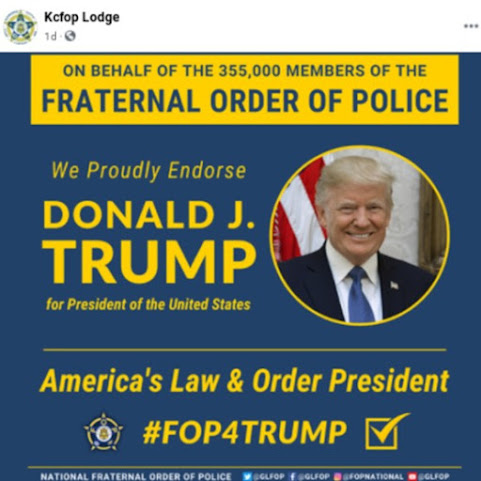 Not so long ago, Missouri officials placed limits on the political activity of law enforcement officials.

Those restrictions have been removed and now local authorities are free to share their viewpoints and perspectives.

Kansas City Fraternal Order of Police, Lodge #99 mostly represents KCPD and hint at an endorsement puts them at odds with the vast majority of KCMO elected officials who lean progressive and toward the Democratic Party.

Moreover, voting history over the past century along with recent polling shows us that the majority of Kansas City voters are aligned with the Democratic Party.

Real talk: KCMO and Jackson County turned blue for Hillary Clinton in 2016 so there's no question that this cowtown remains a Democratic Party stronghold.

And so, this political alliance with Prez Trump and fellow members of law enforcement puts the police union in a distinct POLITICAL MINORITY within city limits.

Accordingly, going forward, when we talk about ELECTIONS AND THEIR CONSEQUENCES, this bold declaration of the KCPD union will likely be noted by quite a few people who are part of the national Democratic Party infrastructure and exercise a great deal of control over their local colleagues. Translation, the po-po picking Prez Trump has the potential to backfire with very little upside if Prez Trump pulls off another historic victory as KCMO police remain under the rule of Democratic Party loyalists.

They had to take a stand! It was the right thing to do!

Good choice! He thinks many of the ex-military now working as police officers are losers and suckers.

Racist cops pick racist President. How is that a surprise?

The DST Systems client services girls would "service" Trump if asked. Anyone in power - they would go down on their knees before. You know what I mean. Too bad DST is no longer around. Sold to a competitor! No more "fun Lori"

Unfortunately, there will be fewer and fewer police to toe that line. Thanks, BLM!

I see a lot of anonymous left-wing posters on here why don't you come out from behind that anonymity when you're making funny comments about the president.
However you're right about Kansas City leaning blue. Dick Berkeley was the first Republican mayor in Kansas City since the 1920s did more for the city than all the rest of them put together.
People who make anonymous comments that are inflammatory and untrue are losers.

Wheeler did more for KC than Berkley and he is a diehard Democrat.

Not that i don't like Berkley, he is a good man.

KC elections are NONPARTISAN for a reason.

Good heavens. Talk about being on the wrong side of history.

And they’re coming for you-hide quickly


Yes, and we support the police.

I support the President and the police, fuck the kkkdemoncraps. It is funny to watch them fall all over themselves now that people are calling out their lies and corruption, they’ve been getting away with it for so long that they have no plan to get themselves out of the mess they created for themselves. It’s like watching the three stooges with these clowns!

When people break into your house, or vandalize your car, or someone trys to assualt you on the street - you will want the police! Are you going to call a BLM social group instead?

Wheeler being a prick almost caused the city to burn down back in the 70's just like this fucktard Lucas is doing.

Good heavens. It's almost like they want to vote for the side that doesn't devalue and hate them.

No one cares about this.

The Democrats are doing great getting their voters to switch sides.

Thank god the police still have tbe guts to stand up when not being hindered by Demoncrats.

If the Boy Blunder goes on national programs and uses the forums to bash the president and the help he offered with KC's violent crime troubles, then he is the one that first improperly interjected KC government into national politics. This endorsement is blow back for Q-ball acting unprofessionally.

Democrats are homosexuals and they switched sides long ago.

Trump called John Mccain a loser for getting captured. Mccain was offered release by the vietcong becuase his Dad was a military general. Mccain refused. He stayed and suffered with his comrades, and could have easily died of jungle illnesses. Trump......a mammas boy.... never gone to bed hungry his whole life

McCain was a loser. He was a mental case after he returned.

Agreed, McCain's refusal to be released ahead of his comrades was a heroic act. After that he became a politician and then turned into a RINO. Even heroes can become losers.

Worst POTUS in US history!! A reality show host! His show is about to be cancelled for lack of interest and fake subject matter!!

This police bs is just that bs... Every incident goes back to training and management oversight and outdated practices! Instead of getting rid of unfit officers they are many times promoted and protected by the ole guard!