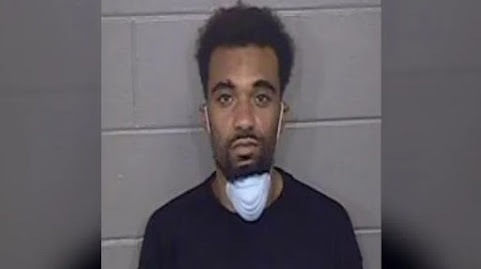 (Suspect) has been charged with unlawful use of a weapon, terroristic threats & armed criminal action.

Prosecutors requested a bond of $40,000 cash only. And there's word that the dude also threatened players via FB.

So much for most of you dickheads blaming it on a white guy!

black lives matter! what a joke

Still looks like a Trump supporter to me. Prove me wrong, CHUD!

That's your take tony? Fuck you.

"Anonymous9/12/20, 8:29 PM
Well if it ended peacefully, then we know it was a white guy with a mental health problem"

12:05-looks like a lifetime member of BLM. Rare to see violent offenders support Trump. They think, since BLM is burning and looting our cities, this is their opportunity to join the mayhem.

in the form of free season tickets...and free beer.

The guy had a Biden 2020 sticker in his apartment window.

In a previous story of this in the comments section, someone said it was a white guy. WRONG.

Even if it is days or weeks later, i always take anonymous people at their word and respond accordingly. Especially on TKC.

He is a doll.
I will suck his cock until his head caves in.
Where do I post bail?

Jackson County Prosecutor Jean Peters Baker is seeking an apology from the suspect before declining to prosecute the case.

Will the Chiefs place the gunman's name on their helmets?

Another pregame and half-time show of Marxist propaganda to force on fans because the police arrested the gunman at Arrowhead? Maybe bumped his head when they put him in the backseat of the squad car.

Why did the Chiefs call KCPD ?

I thought Patty Cakes, Hunt and the Chiefs inferred all police officers are racists on national t.v. during Thursday night's game.

The football fans support the police not criminals.

In support of the Blue, the fans booed the Chiefs false narrative and then the fans are labeled racist.

Clark Hunt and the NFL are cowards by not supporting police officers who put their lives on the line every day to protect law-abiding citizens.

Every incident that BLM charges racism involves the Police arresting a convicted felon who has committed another crime and is resisting arrest.

The Police officers were put in the position of using force by the felon resisting arrest or attacking an officer.


Two police officers ambushed and killed in Los Angeles and not a word from Clark Hunt or the Chiefs players.

I guess a policeman and police woman's lives don't matter to Hunt, the NFL or the Chiefs players.

The Compton shooting reminds me of when the black extremist Antoine Fielder shot and killed two white sheriff's deputies in Wyandotte County while being transferred to prison in 2018. When will the racism stop? Rest in Heaven, Deputies Theresa King and Patrick Rohrer.

NFL ratings down substantially for the weekend and many didn’t watch games, more to watch spectacles the NFL idiots made of themselves. They’ll never give cops any credit. No turning back, now. I hope people remember these fucks. They are betting we are all Democrats with no long term memory. In my opinion, they have screwed their fan base one too many times. Many people are finding other ways to recreate and won’t return to game viewing.

1:49 no no no, Petersucker will demand an apology from the police and then decline to prosecute this clearly dangerous black.

Fixed it for you.

More like his baby momma to the 5th degrees window,most male niggers don't pay their own rent

@3:09 and yet the ratings for yesterday’s games set a four year high. Second only to the SuperBowl ratings. Huh? Totally weird. Boycott didn’t work!

The natives are Restless.CAN YOU SAY YOU THAT. HAVE you ever seen this much violence in K.C.MO.AND they Don't think about the consequences.And then there is Blacks shooting Blacks. And you wonder why there is A Race issue in this Country. Do you want to do business or be a Tourists in a City with do much violence .I visit,small towns in Missouri and they ask What is going on in Kansas CITY ,and I say The MAYOR.

48 hrs after the very homesexual hand holding on the field in “The show of unity”..... we had a North American domesticated chimp shoot up the stadium. They mayor was prob on the phone the whole time begging the commanding officer to use “less lethal”. THE MeDIA Fakers down played the whole incident because it was a colored person... so fake and driven by fake narratives

Another Irishman shooting up the place. Major business going to be moving from the Plaza because of this bald headed MFer. He relates well to shitholes as he turns KC into one.

6:23 you are an incredibly full of shit piece of shit. Do better.

The ratings for the Texans-Chiefs game, which was carried in prime time on NBC, represented a 16.1% decline from last season’s NFL opener between the Green Bay Packers and Chicago Bears. https://dailymemphian.com/section/sportsmemphis-grizzlies/article/16831/sports-notebook

6:23 you think most people cannot see there are many inflammatory dickwads on this site? Get thru your thick skull that your representation is not helping the black community. Everyone looks forward to the day it does.

Neither cop died but hopefully the nigger shooter will.

@7:15 and apparently you can’t read or comprehend. Did you check the afternoon games on Fox and CBS?? Oh boy! Busted. The afternoon game set a four-year high. What happened?? Narrative blown. Ugh oh! Now get your shine box! Stupid fucking simp.

Bring back the gladiator games of Ancient Rome !! Let’s watch the savages fight each other to the death ! I

Leeebron James is a scumbag. Mad because he will never be Michael ...

Networks will misrepresent the viewership ratings as the networks and NFL need the corporate advertising revenue.

People have tuned out the arrogant NFL.

Has nothing to do with if they are right or left, just that they bought into one side's angry BS.

Silver Spoons like Hunt's family never serve in the military or risk their lives to appreciate the national anthem or police officers risking their lives.

7:48 your idiocy is astounding.

In general we all fit right in.

This must be Corn Pop’s son. Should have called Hiden in to negotiate. “Common man”! “I’ll let you rub my leg hair”!