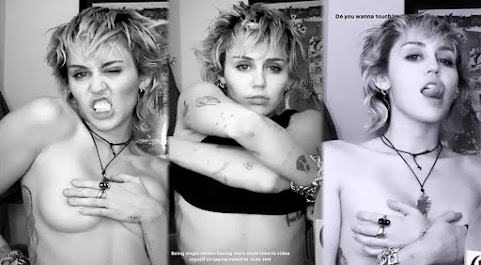 Right now we are inspired by hottie Miley and her social media winning to take a quick peek at pop culture, community news and top headlines.

KANSAS CITY, Mo. - As the holiday season approaches, FedEx announced it's bringing up to 1,300 seasonal jobs to its facilities in Lenexa, Olathe and other locations in the Kansas City area. The company said it has open positions for package handlers, which will start as seasonal positions but have the potential to become full-time.

Kansas City mayor Quinton Lucas, navigating a 2020 that's brought a global pandemic and social unrest, says he's found a group of peers he can lean on for assistance. Lucas was one of seven Black mayors featured on NBC's Today Show on Friday morning, with most of them talking about a group text they've created as a forum for sharing ideas.

KANSAS CITY, Mo. - Here's an issue your family can probably relate to: your cell phone's data usage and whether or not you should pay more for the unlimited plan. That's the discussion Kansas City Public Schools had Friday afternoon during a special meeting with their board of directors.

She recently broke up with her beau Cody Simpson. And Miley Cyrus stripped topless on Instagram this Thursday while enjoying the single life at home on lockdown. The 27-year-old showed off her sprawl of tattoos as she folded her arms over her front to avoid violating Instagram's Community Guidelines.

A former aide to Vice President Pence who served on the White House coronavirus task force alleges spent nearly an hour during one meeting talking about instead of discussing agenda items set for the meeting. "He watches people, he watches the news," said Olivia Troye, a former adviser to Pence for Homeland Security.

'He's paying attention to people like us': Trump's messages resonate in Wisconsin

With 47 days to go until the election, Air Force One flew into central Wisconsin's airport on Thursday evening, where Donald Trump pitched himself as the lone figure standing between Americans and leftwing radicals bent on chaos. "Biden wants to surrender our country to the violent leftwing mob," Trump told a crowd of thousands beside the tarmac.

A firefighter has died while battling the El Dorado fire that was started by a gender-reveal party in Southern California, officials said Friday. "The name is being withheld pending notification of next of kin. Our deepest sympathies are with the family, friends and fellow firefighters during this time," the U.S.

Can US TikTokers still legally use the app after Sunday's download ban?

The Trump Administration's long-threatened TikTok ban is here, but don't plan a funeral for the popular video app just yet. Beginning Sunday, both Apple and Google will be forced to stop making TikTok available to download on their app stores. Likewise, TikTok will not be able to update its software after Sunday.

Amid shortages of Clorox wipes, this is a new alternative in stock. Pine-Sol Original Multi-Surface Cleaner received approval from the U.S. Environmental Protection Agency (EPA) "for kill claims against SARS-Cov-2, the virus that causes COVID-19, on hard non-porous surfaces," the Clorox Company announced in a press release about its cleaning product.

KANSAS CITY METRO - Chiefs Kingdom, you have done it again! The Chiefs and the Kansas City community have broken the record for flag sales on the 29th edition of Red Friday, racking up a whopping $1 million. The money goes toward the Ronald McDonald House of Kansas City, which houses families of sick children during their treatments.

That's cold. KC is not a bow tie town.

Miley is a nasty skank

And yet she is a multimillionaire and has millions of fans all over the world while u are reading a 3rd rate local blog aboit a crap city.

Look...PeeWee Herman is doing the weather.


Quinton Lucas found love with other black panthers to terrorize our country.

That chiefs flag sales crap is a LIE.

Miley used to be a hot piece of ass, not so much now

Is that really something you want to trumpet on The Today Show, that you're seeking advice from 7 other Black mayors in failing cities. Wouldn't it be better for KCMO to seek advice from Trump or at least mayors from more financially successful cities? What does the race of the mayor mean to Mayor Q?