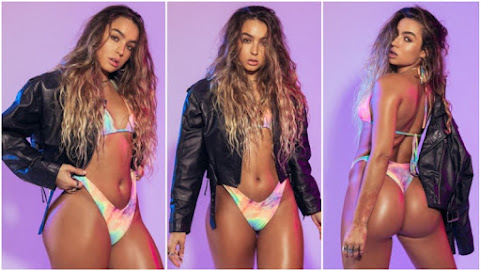 Over the past couple of weeks, we've missed waking up early with our blog community of d-bags and so this FRIDAY FIRST NEWS BLAST is inspired by rising star hottie Sommer and her fashionista turnaround as we share more pop culture, community news and top headlines.

As Kansas City's live music and libation spots continue to find a way to welcome socially minded folks, football season is officially underway. So with a lot of live music in the cards and a game to watch come Sunday, here's a full guide to a weekend's worth of good times to be had across town.

KANSAS CITY, Mo. - Several Covid-19 vaccine trials are underway in the Kansas City area. The Center for Pharmaceutical Research is moving forward with trials of a DNA vaccine developed by pharmaceutical company Inovio. Trials began in April when participants were given injections of the potential vaccine.

The deadline to apply for City of Kansas City, Mo., 2020 home repair programs is coming up this Friday at noon. The Neighborhoods and Housing Services Department is accepting applications for the City Home Repair, Targeted Home Repair and the Paint Program through Friday, September 18.

KANSAS CITY, Mo. - We're just 46 days away from the presidential election. And while there'll be various polling locations around the metro, Kansas City election officials say Arrowhead Stadium isn't actually set in stone yet. "We're in the process of negotiating. Negotiating is different than yes," Kansas City Board of Elections Democratic Director Lauri [...]

Sommer Ray Thanks Fans By Parading In Thong, Leather Jacket


Prez Stands Up For Flag

President Trump's reelection campaign wasted little time late Thursday to highlight a brief but awkward moment during the Joe Biden CNN town hall in Pennsylvania. The soundbite was born when it was Susan Connors' chance to ask Biden a question.

The Department of Justice (DOJ) has explored charges against Portland, Ore., officials after nightly protests for police reform led to clashes between demonstrators and law enforcement, a spokesperson told The Associated Press on Thursday. DOJ spokesperson Kerri Kupec said the department had conducted research on whether it could pursue charges against Portland officials over their handling of the unrest.

Democratic vice presidential nominee Kamala Harris received praise for sporting Timberland boots on Wednesday, but the media wasn't nearly as kind to First Lady Melania Trump when displaying a similar look. Upon her visit in her home state, Harris was seen wearing the iconic boots while surveying the devastation left behind by the California wildfires, sparking plenty of compliments on Twitter and glowing headlines from the media.

OLATHE, Kan. - The Olathe West community wants to make sure coach Derek Leppert isn't forgotten. The assistant baseball coach and front office staff member died Sept. 10 from COVID-19 complications. He was receiving care for the virus in a rehabilitation hospital. One week later, the high school announced it has renamed its baseball field [...]

KANSAS CITY, Mo. - When the University of Missouri-Kansas City hired Ivan Ramirez at their Office of Multicultural Student Affairs, one thing really surprised him. "When I came onboard, the climate survey said that Latino students didn't feel like they belong at the university," Ramirez said.

You will notice a much more rapid temperature drop near and after sunset this evening as cool upper Midwest air settles in thanks to a northeast breeze which will continue to blow in at a steady pace overnight. Clear skies will also factor in as area temperatures fall into the lower 50s with a few locations reaching the upper 40s.

I bet that Sommer gal has a hot little pussy. I’d like to get on her.

^^But you can't because you're a disgusting virgin INCEl.

The DailyUK is full of liberal sh*t. Of course, Trump uses a teleprompter, but he doesn't use it like a constant pacifier, which is what Biden is doing. Trump goes off teleprompter quite often and doesn't sound like a man with dementia. Biden acts like a man who's escaped from the memory care unit at a nursing home and needs to escorted back to his room.

^^^
okay Russian bot. But I'm from Kansas City I'm still not voting for Trump. You're not very convincing.

And yet Trump's pod people are so used to his hypocrisy they won't bat an eye at the absurd levels it's reached. Very weird.

Russian bots, I love it.

Are they the ones that set up Nancy Pelosi to get her hair done without a mask? Dang those Russians!

She looks like a giant hot dog stuffed into a too small bikini.

Took me three years everyday to wear out a pair of timberline boots. Ms. Trumps should last another four.

Yep, there's always something wrong with tony's girls - makes me realize over and over again nobody is perfect.

@ 8:18 Nobody cares. President Trump will not miss your vote.

There’s a difference when reading off a TelePrompTer during a speech, all politicians do, the problem is hiden joe biden is being fed answers to questions on his TelePrompTer, that’s a big difference right there. Rapey joe can’t answer a simple question without someone giving him the answer first. Sad.

Joe Biden and Anderson Cooper are making a point of social distancing during the CNN Town Hall while on the stage.

But when they think they’ve gone to commercial break, they get so close to each other that Biden is whispering in Cooper’s ear: pic.twitter.com/ClZXrxFfSo

It would have been great to see the Boy Blunder slapped with cuffs and hauled off to face charges of seditious conspiracy. Very satisfying to see the destroyer stopped in his tracks. A man can dream.

Joe Biden, 2020 candidate for something said...

I know in my heart that I am the only one who can truly defeat Ronald Reagan this November.

Oh sorry, I meant I know in my heart that I am the only one who can truly defeat Joe Biden this November.

I'm Joe Biden and I forgot what the hell I'm talking about. Would you like to play with the hair on my legs?

Sleepy Joe has been in D.C. for 47 years. He's done nothing to make America better and help Americans. He even admits that Obamacare is highly flawed.

And commenters who blame everything they disagree with regarding Biden's terrible track record on Russian bots are big pus*ies. Weird.

Joe picked Kamala because her hair smelled the most like his own wrinkly scrotum eczema.

Can you say "DESPERATION!" boys and girls? 🤣

NEWS: Four House committee chairs — Schiff, Nadler, Maloney and Lofgren — ask DOJ inspector general to conduct an “emergency investigation” into Bill Barr’s handling of the Durham investigation and whether he has authority to issue an ‘interim’ report.https://t.co/bCdMoJClOZ pic.twitter.com/O8OHHsvNVi

PRO TIP: You are definitely over the target when you start taking enemy fire. 😏

I have $100 that says Chimpy goes ape shit before the night is over.

What odds are you giving?