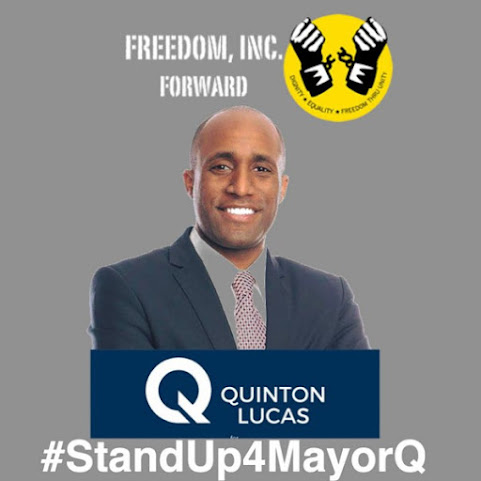 Here's a look at East side support ramping up for Mayor Lucas as the recall petition moves forward . . . The argument is important for many reasons but mostly because it reveals organized political action committees joining the fight to defeat the right-wing Republican effort to replace the mayor.

"Freedom, Incorporated stands up for Mayor Quinton Lucas and ask other fair minded individuals and organization, to do the same. Some have decided that the requirement to wear a mask in Kansas City, violates their Constitutional rights. I think those individuals may need to take a second look. The United States Constitution guarantees the rights for each individuals to life, liberty, and the pursuit of happiness. It does not give anyone the right to use those rights to harm or interfere with another individual’s right to life, which is greater than Individual liberties or the pursuit of someone’s happiness. Mayor Lucas‘ mandate To wear a mask has saved lives. That’s more important than a few people who object to The concept of caring for others. So, WE THE PEOPLE, let’s wear our masks and support our Mayor, who cared enough to rise above politics, save lives and protect the public’s health."

Here's what you missed TKC, what's more important is that democratic groups can ramp up fundraising during an extremely slow time of year.

I'm sure the Republicans are doing the same.

^^^ yet, you read it and understood it and admit you're scared. Weird.

The sonuvabitch must pay!

Looks like Marxist Nancy Pelosi got her hair done without wearing a mask in San Francisco.

Media having a hey day with Pelosi's duplicty.

Nasty Pelosi is too good to wear a mask. She proved that yesterday. Why aren't you craling all over her with faux righteous indignation? Cat got your tongue boys?

CNN's Chris Cuomo recorded talking about sexually harrassing women and "you can never trust the media".

10:57 “ understood it” “ admit your scared? Hmmmm. you are legendary for putting words in other peoples mouth, I wonder what gets put in yours! Weird


This isn't just about the masks. This is about Quinton Lucas and his racism and helping the rioters destroy the city. It's about him not hiring white people to fix the streets when he had white people applying for the job and then saying he had no applicants among many other things.

Quinton Lucas needs to practice what he preaches because he has violated his own rules just like Nancy Pelosi You know the commie way with democrats is...rules for thee but not for me. so before you Anti American communists blame people for wanting to do away with masks look to your mayor who doesn't wear one nor do any on the other side of the state line like the one who wants you dead....and that would be Sharice Davids. Maybe Sharice Davids mistook hers for a kotex she's about that stupid.

Choosing to not wear a mask does not harm anyone else’s rights to life, liberty, or the pursuit of happiness, which are NOT guaranteed by the Constitution. Those words appear in the Declaration of Independence. Freedom incorporated does not appear to even be familiar with this nation’s founding documents. Maybe they should refrain from offering their ill-considered opinion and go off somewhere and do some reading. Just a suggestion.

Scared of their low-IQ grasp of grammar, but that's about it.

Wait, probably also scared of how much public money they get for they Escalade and they weave.

Bananas! It's our little Chimpy, after all.

^^Self-owned. He's always on your mind. You're his bitch. Bitch.

Chimpy getting desperate! Lol. Go ahead and keep performing, Chimpster! But be less boring. Lol

As a result of the riots, incompetent officials like Q Ball and goofy shit like this story race relations have reached a now low. Great job boys!

^^^Endless Russian spam. Not even connecting with anyone on the thread.

Freedom Inc is a joke and to be honest surprised it took this long for them to support Lucas. But as always Freedom Inc isn't about the truth and facts. The recall isn't all about the mask issues. It about all the different stances and actions of Mayor Lucas that are actions unbecoming of any Mayor which puts people and property at risk.

Freedom Inc. is a conglomeration of misery merchants and poverty pimps.

^^and you're a Russian spam troll.

^^Total failure to engage with the argument.

^^And you are desperately in need of a new deflection technique.

Leave it to an irrelevant, racist, and useless group like Freedom Inc to completely miss the point of the recall. It is NOT about masks. It's about his inability or unwillingness (or both) to be a leader and address the tough issues. It's about his inability to make any kind of a decision. It's about his desire to be "liked" by everyone to such a level that it takes precedence over what should be his primary focus - doing what is best for this city. It's about people who are sick and tired of an ineffective mayor who panders to whatever audience he happens to be in front of him at any given time.