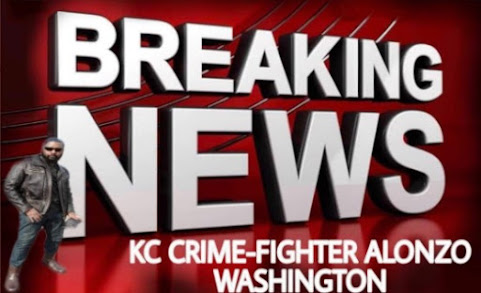 Thanks to the efforts of one of Kansas City's most prolific activists against crime, grieving family and friends are closer to to finding answers about a tragic death of Daisy Martinez.
Saturday update . . .
THE SUSPECT IN THE TRAGIC SHOOTING DEATH OF DAISY MARTINEZ HAS HAS BEEN CHARGED!!!
Alonzo Washington recently reported the latest development to his legion of social media followers after doing a livestream from the shooting scene and inspiring TENS OF THOUSANDS OF VIEWS and followers to share tips and info with police.
Mr. Washington noted: "The local MSM didn't cover this homicide with as much intensity as they should have, it was really social media pressure that likely inspired MORE PUBLIC AWARENESS."
Accordingly, Mr. Washington was a big part of KEEPING THAT PRESSURE UP and encouraging witnesses to cooperate with police.
At a time when violence is reaching historic levels, Mr. Washington's work has been a rare success story in leading the community fight against rising crime.
Developing . . .
Posted by Tony at 9/19/2020 03:11:00 PM

This is good news for right now but we need other people to do their job. For instance, this would be a great time for prosecutors to step up.

And then we can't have the judges giving wrist slaps for crimes like murder. It's important to give tips but the people in power have to hold up their part of the bargain as well.

^^^
Sure. But wouldn't that also require voters to step up and do their part as well. Weird.

It is good news. Alonzo and KCPD have both solved many murders. LeGend applies even more pressure.

Unemployment and poverty are two adressable issues that underlie murder rates in American cities. It will take time and effort to turn things around.

Keep it up, Alonzo, and thank you.

I was hoping to see the TKC news van doing live coverage of the Blaxx on Briarcliff weenie roast tonight.

Is it happening ? If so beware of crossfire.

She was a very cute girl. Her facebook page 2 months ago mentioned the murder of the women with the baby in a stroller at 7-11. She added that she hoped God would protect her and her family. It also mentioned a sister and Mom that died. Looks like she came from a very small village in Mexico. maybe she didnt understand how dangerous cities in the USA really are. Very sad.

The feds have found Alonzo to be an excellent resource in showing them where the criminals are and how they operate. He is the local authority on fighting crime.

Alonzo is a lot of hot air and a racist's hot air at that.

Where is the proof the killer turned himself in? Not like Alonzo hasn't made false claims in the pats.

Unemployment. Looks like the drug dealers are shooting each other. When they are arrested they have 30 thousand dollars stashed in the wall. They Drive 50 thousand dollar,cars and you tell me they are unemployed .

Alonzo solved the case of the missing whore a few years ago who was found in the river by Parkville.

Alonzo for mayor? People blamed the Police for the whore/stripper's disappearance - but she was on drugs and drove into the water herself. Hundreds of people over the years have driven down boat ramps by accident, they find cars with bodies every year...

Like I said before you kissed his ass,aim4peaces budget wouldn't cover 2 months of child support