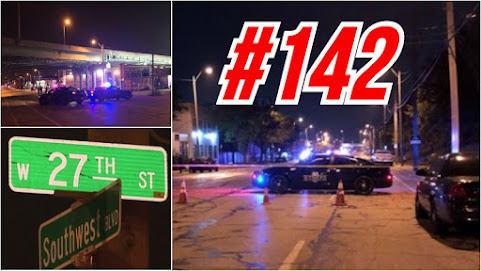 The upshot: Every local demographic is contributing tot his town's historic homicide spike as we quickly approach a murder record.

THE BIG PUBLIC SAFETY COMPLAINT HERE WAS THE EPIC CROWD OF MEXICANS DESPITE CORONAVIRUS CROWD LIMITS!!!

Money line and neighborhood complaint after the Blvd was shut down without any permit . . .

"Police said their preliminary investigation indicates there was a large gathering of vehicles and people in the street throughout the 2600 block of Southwest Boulevard when multiple shots were fired from an unknown vehicle."

Local note from the scene was sent our way last night as the carnage was widely witnessed via social media:

"One chick was shot and she looked dead, Snapchat video of her laying there is all over social media. And apparently 2 other cars started shooting at each other.. It was like the Las Vegas shooting videos, everyone was running, we had a group of 20 on the ground.. using a car as a shield, gun shots from both sides but it was quiet as a mouse, no screaming.. just the gun shots."

Accordingly, this might put a damper on other festivities for Hispanic Heritage Month . . .

Was ICE on scene?

Actually, if you're familiar with the area, there's usually some law enforcement always present. The clubs pay for a lot of security.

The murder was likely a parking lot incident away from the clubs.

Yes there is always a law enforcement presence in that area because there is a Quik-Trip close by.


Where is the mayor he is responsible for this crap. He said he would stop it and he has made it worse. When are you protesters going to storm the mayors office. This is his fault for his racism and hatred for everyone except black criminals. Where is the beloved Patrick Mahomes he stands with the terrorist group BLM but does nothing to help the city and the crime he says he stands or kneels against. HYPOCRITES and TERRORIST TROUBLE MAKERS. Standing with the black panther fist and kneeling like submissive idiots isn't going to do anything.

142, meh. Meanwhile, in the major leagues, Baltimore has 239 murders and Chicago has 566. St Louis is kicking our asses with 194. Our hood rats are incompetent pieces of shit.

so that is why all the 'viva la mexico' chanting and stuff last nite ... did not realize it was like their july 4th ...

Huge Mexican party at night. Yea, somebody is getting shot. Just saying.

"Git your hands off my seeester".

When does Donald Trump keep his promise to end this carnage in our American cities? Where are the FEDs from Operation Legend?

Right after he builds that border wall.

From the looks of this party, he isn't doing a very good job.

Why don't Mexicans have barbecue?

Because the beans fall thru the grill.

What to you call ot when a Mexican and a pedofile fight?

^^^ A grammar Nazi would point our that you spelled predator incorrectly, but I think that's somewhat funny and I'm using it on my gardener. So it'll do, it'll do.

Maybe it was a historical reenactment gone awry. Or maybe she was just one of those loud ass Mexicanas that wouldn’t shut up. Regardless, I bet she had on big hoop earrings and jeans that were 3 sizes too small.

Why doesn't Mexico ever hold the Olympics?

Because everyone that can run, jump and swim is already out the country.

This isn't the first shooting at this location. Will these clubs get the same kind of treatment that 9ine ultra lounge did?

Maybe it's time to think about stricter enforcement for these places.

Pro Tip: Try to be witty. Creativity would be a plus.

Bandit and Ayatollah are funny; you're not.

^^What kind of "enforcement" did you have in mind?

No comparison between Mexicans and blacks.

In general, Mexican culture is fine. Like whites, always some bad apples.

what did the mexican fireman name his two sons?

What do you get when you cross an octopus with a Mexican?

I don’t know but man can it pick lettuce.

A Mexican runs into a wall, what hits first?

Its too bad this happened to an innocent bystander. Cant imagine her family's grief. Its well known that many hispanics are armed. and have guns in cars. Police should have been sitting in their cars waiting to chase down any cars doing driveby. That would have prevented this. To let 2 cars get away scott free is just stupid...

Bandit, I realize this story is about the latest tamale tragedy, but I just saw something that I’m thinking you can answer for us. Why do negroes take extra time and effort to back into parking space even though everyone else has pulled in head first?

^^The faster the get-a-way from the Quik-Trip they just held up.

oh, that's the monbac tribe - come on back.

10:14, Baltimore has an advantage over Kansas City because they signed a policing reform agreement with the Obama Justice Department, Civil Rights Division. As did Chicago, if I remenber correctly. Any city that was dumb enough to do that is in a separate violent crime category.

i was just on 27th n sw blvd on saturday night,,, really large crowd on the blvd from 26th to about 28th, i assumed it was some unoffical low rider deal, lots of maryjuana odor, some vatos n jaianas, i assume it was some hot head over a chica or a hard look, possibly a gang skirmism. I was also in armourdale/10st n minnesota ave on friday night and noticed quite a bit of graffiti taunts from spv and florenica antagonizing eachother. these wyco vatos are moronic and so eager to prove that they are authenctic sureno mexican mafia footsoldiers, where as the missouri westsiders have their barrio and history and never had to assert themselves like the pseudo mexican mafia footsoldiers which exist in every state like mcdonalds.

Do we need 12 more for the record?

Mayor mckneely has been very good for the murderous blacks.

White people, not so much, he hates whitey with a passion.

No sense of humor. So leftist. Yawn.

^^^ I hear they’re working on a commemorative coin for the big record breaking! ^^^

Yup, they pretty much hate everybody else. But if you make fun of them, somehow you're racist and they aren't. Go figure.

This is not Mexico. Please do not celebrate Mexican holidays here. If you live here your American, or pretending to be, NOT MEXICAN. If you love Mexico that much, please move there.

EVERY local demographic, Tony? I don't think so. Try again.

@8:15 why not. We’ll stop when you stop celebrating thanksgiving and Columbus Day