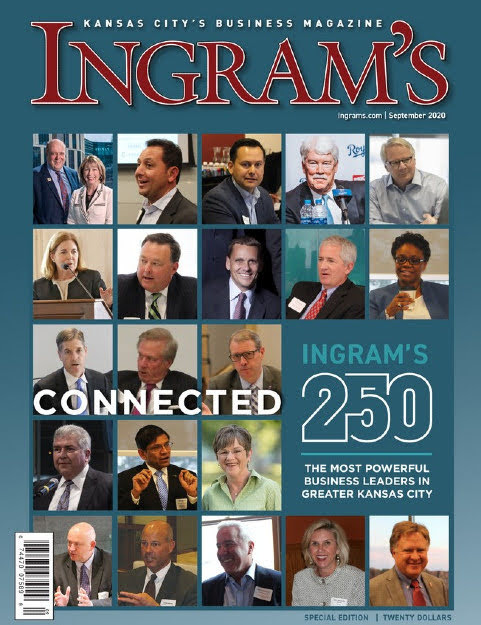 For those who don't know, Ingram's is an old school local biz mag that provides a worthwhile read in the waiting room of dentist's offices across the metro.

The magazine is longstanding and respected local biz community niche publication but every year some of our more "progressive" friends deride their "best of" issue for featuring mostly white people on the cover.

The ritual of righteous indignation was BORINGLY REPEATED for 2020 but this time around there's a twist.

Earlier in the week, Congressional candidate Ryan Derks made a bit of noise with a nicely produced campaign video that earned some attention around this cowtown because it debunked most of the promotional hype that dominates local media.

Let's be real. . . Ryan Derks was never going to beat Congressman Cleaver but the challenge has frustrated some of his supporters so they've outed this bit of social media chatter in order to offer a more complete "perspective" of the candidate.

Accordingly, Ryan Derks "boldly" defending the integrity of white dudes in general is going to turn away most of the voters who might have been on the fence . . . And it's causing the candidate a great deal of negative publicity for a campaign that was punching above its weight class.

And so, social media free writing has once again backfired . . . Check the pro-white statement from Mr. Derks that has sparked a weekend firestorm and ignited a litany of predictable allegations of racism: 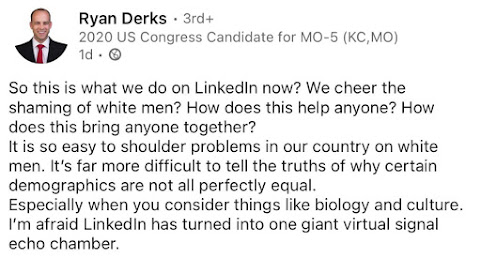 "Why's everybody always picking on me."

Only a liar would claim that Blacks & Whites have an equal chance.

No, not really, he’ll do just fine and by the way, has everyone got their vote all black pamphlet from freedom inc?

Right. So, if he said something supporting black people, even though he speaks the truth, would be acceptable. Blacks need to get off the “poor me” “give me more welfare”. ACB will get appointed shortly, and if you want to see real bigotry, watch the Libs next week as they try to assassinate her.

Oh shut up blieron, nobody wants or needs to hear your uneducated and sick opinions.

Why not debate Bryon on the facts instead?

He is wrong and Derks should be considered. That is what is important!

Bryon has trolled other people on this blog. He does not deserve respect!

Maybe, just maybe they didn't make the cut. But like Hollywood they will have to have quotas from now on regardless of qualifications.

No mo magazines in waiting rooms thanks to the Wuhan Wheezer.


The doctor at Pfizer has said the virus is over and there is no second wave.
Has anyone wondered how Dr Fauci knew this virus was going to hit and when? His words were after Trump was elected....There's going to be a virus during this administration. How did he know that???? And why did Obama fund that lab that this virus came out of?????? Wake up people!


Vote Derks no one cares how many black people are in the picture. Cleaver has done nothing except evade taxes and hate on white people.

I would 6:30 but I got the hell out of Kansas Shitty while the getting was good. Y'all are on your own. Only reason I go back at all is to move others out. Won't spend another dime there. It can rot in smoking rubble for all I care. Had enough and done with the place aside from sayin' I TOL'YA SO!


per Fuckhouser "Only a liar would claim that Blacks & Whites have an equal chance."