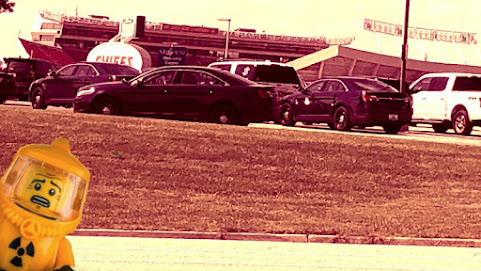 This week Kansas City's football stadium was the focal point of social justice protest and right-wing fan push back. Currently, a gunman and police are locked in a confrontation and hope for a peaceful solution.

"Avoid the parking lots at the Truman Sports complex; police and security have entrances locked down and the complex is CLOSED. Police investigating an armed person in the parking lot. THERE ARE NO EVENTS CURRENTLY HAPPENING AT EITHER STADIUM"

"Officers were called to the stadium around 11:30 a.m. Saturday morning to investigate a man who was armed with a gun. When they arrived they were told the man had taken shots at employees. After making sure that no one was injured they made contact with the suspect and they currently have him contained in the southeast parking lot of the complex.

"Negotiators are at the scene and are talking with him and trying to bring this incident to a peaceful conclusion."

KSHB: KCPD in standoff with a gunman in the parking lot of Arrowhead

Fox4: Police are on the scene of a standoff at Arrowhead Stadium

BN: Police Standoff with Shooter Near Kauffman Stadium in Kansas City Has Pirates Holding in Their Hotel (UPDATE)

KCPD ended this one peacefully as gunman surrendered amid reports of an alleged mental health crisis.

Will the officers use their night sticks?

Police are showing a lot of restraint so far. Obviously the dude isn't black.

My guess is that it's the damn Amish. They cause most of the trouble around these parts.

Seems like a message to the team. Glad the shooter didn't hurt anybody. A shame that we can't even have football without politics and gunfire.

Royals are suppose to play today

BLMer who got lost on the way to a peaceful protest.

Sorry. Most likely NOT a Trumper. Description was a black male. Nice try though.

4:46 no wonder they can’t just shoot him and get it over with, mayor mckneely must go out there and kneel in front of this guy and beg him pretty please don’t hurt no body, please I’ll give you what evar you want, just give up so I can get my selfie as the hero of the day!

Clark Kunt, Fat Andy, PattyCakes and the NFL were displaying their fake social justice narrative against the police on Thursday night.

Now, they need the police to risk their lives to save Chiefs employees from a gunman.

Shows how professional the KCPD is to rescue Kunt's employees.

Most folks after Thursdays nights anti- police festivities would have told Hunt and the Chiefs to go fuck themselves.

We can do that for them:

difficult to imagine that anyone in the metro is good at negotiating.


I think this is flipping funny. What goes around.

difficult to imagine that anyone in the metro is good at compromising.

Another buggy-driving Amish pilgrim, who was just turning his life around despite a long rap sheet, disobeying police commands. Went all balistic when the police told him to clean up the horsesh*t dropped in the parking lot.

He was looking for 9ine Ultra lounge.

Fucking Hilarious Haha 😆 omg 😆 😂. Not even 48hrs after the hand holding of unity a black shoots up the stadium ..... Fix the culture, stop blaming whitey.. Mayor Dick Suck was downplaying the booing also ..... hahaha 😂

The Libs and BLMers look like Retards a little more on the daily .... Operation Legend prob saved lots of lives taking all those chimps off the streets... The Mayor would take out his knee pads a suck the orange penis if he had any class .

There's a lot of mental illness out there. Not everyone can process the nuance of political battle without getting triggered.

Will the Chiefs place the gunman's name on their helmets?

Bet I can guess the race of the suspect!

Did Bannedidiot get banned again? Welcome to the anons! LMFAO. Bwahahaha!

Didn’t mayor mckneely go plead with this psychopath yet?

Has the criminal run out of drugs and colt 45 yet? Been a long day and it’s only gonna get longer, quick mayor mckneely, bring that man some drugs and booze stat!

Always has been and always will be.


cops finally got the Democrat hood-rat in custody..

Why guess when you can await confirmation? Are you that desperate for affirmation of your bias.

Haha your so intelligent

Logic, Bro. Why fight it?

Just another turd in the litter box that is KCMO.