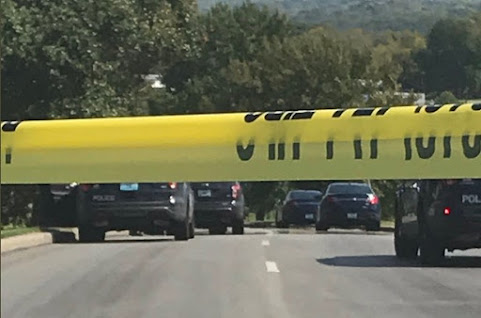 It's a busy Saturday in Kansas City but tense exchange of bullets is a good place to start worrying about the fate of this cowtown as violence and civil unrest escalate.

"Saturday afternoon near E. 63rd Street and Swope Parkway . . . Police say both the suspect and the officer fired shots. The suspect was left with non-life-threatening injuries. The officer was not injured in this incident."

Cross fingers suspect is alive. If not, the chief is probably gone at this point.

Not at all. The shooting was likely justified. Do not jump to conclusions.

I'm sure it was justified.

But you better hope there's no video. Nowadays anything could set people off against police.

Too bad the cops didn't off the dirtball.

How long before mayor mckneely throws the cop under the bus? That idiot Petersucker is chomping at the bit to throw some cop in jail. She lets murderers go but a justified shooting by the police gets her all hot and bothered, she’ll probably ask for the death penalty, she’s that stupid.

Should’ve popped that MAGAT right in the noggin’.

Well gosh if the person of interest is black just gotta let him go, sure he had a good reason.

I think police need more time for target practice. Let them carry more accurate and lethal weapons. Would be more cost effective when shooting dirt-bags like Jacob Blake, who is simply a vegetable who will cost the taxpayer more money.

Bandit, you're an idiot.

This announcement was unofficially made a couple of days, ago.

No one will be driven to suicide.

It doesn't matter how many comments you make on this blog, you only get one vote. Same as me. I'll be voting for the person not named Trump.

That’s because you’re stupid blieron, in the end, you’ll lose and we will win so.......

And Forte even showed up then released his own press release. What a giant dick. That "call out" is going to cost the county some OT money.

Blacks can’t stop violence because they learned it as children. That’s what they know, and people are tired of it. As a race, they have never assimilated into society yet blame everyone else for their lack of accountability.

Google Maps has a skull & crossbones icon at that intersection. Stay the hell out.

Most definitely need street graffiti there. Q Ball, get on that right away!

If you're a self-appointed "activist" and try to establish your relevance by "protesting", you can be sure to count on the counter-productive, inappropriate, and even self-destructive of the usual suspects in the black community to give you a "cause" to pursue each and every day.
What would a week in KCMO be without the ridiculous and even criminal behavior that has become the trademark of certain parts of the city and an easily identified group?
What will the excuses followed by "demands" be this time?

Negroes bleeding out before they die is kind of like street graffiti, no?

I thought the street graffiti was to cover up the blood stains. 😏

I'm sure it was another worthless nigger. Jump to conclusions like the fucking media. But watch the news. I bet I'm right

Hopefully a bunch of Democraps suicide.

Your words are DISGUSTING!! So, you probably are too!! Makes YOU worthless. SO SICK of the blatant racism that this country has been unleashed to say and show from our DISGUSTING potus!