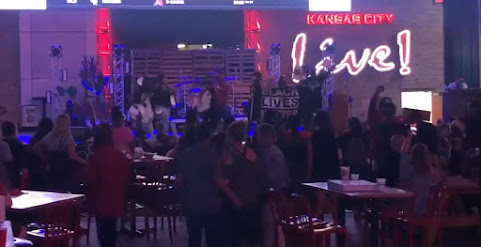 Here's a glimpse at a noteworthy donwtown crowd demanding social justice in a demonstration that's marching through streets inside the loop repeating outcry against law enforcement in solidarity with other hotpots across the nation that continue to clash with authorities.

"About 100 protesters gathered in front of the Kansas City, Missouri, Police Department for a third night in response to the decision in Breonna Taylor's case, and within two hours started marching toward the Jackson County Detention Center."

The prisoners at the downtown jail are flickering their lights in solidarity as chanting and marching continues.

"Demonstrators spill into Kansas City Live during the Royals game. Among chanting Black Lives Matter protesters are reminding people of Ryan Stokes, an unarmed Black man who was shot and killed by @kcpolice not too far from here in 2013."

Listen closely to that clip and notice the crowd doesn't seem to be too sympathetic with protesters who are interrupting their baseball night.

ABC News: Demonstrators are marching in Louisville, Kentucky, for the third night of protests since a grand jury decided not to charge any police officers for the fatal shooting of Breonna Taylor

KSHB: Activists train to be ready for anything during protests

UST:Breonna Taylor protests: Police use flash bangs hours before curfew in Louisville; mayor says violence 'will not be tolerated'

That doesn't look fun at all.

I don't think that was the point.

The protests destroyed the plaza, they burned a wagon in Westport and now they want to chase away all of the business from P&L too.

Alex Gordon is a chump. said...

It's the Royals. The customers aren't missing much.

Still not voting for the Orange Cheeto. Sorry.

Even President Pelosi would be better than that bum who doesn't pay his bills.

Would love to see Proud Boys show up.

Support for Black Lives Matter protests has plunged from 54 percent to 39 percent in the past three months, and those who disapprove of the movement now outnumber those who approve it, according to a poll released by the Associated Press-NORC Center for Public Affairs Research at the University of Chicago on Wednesday.

Doesn’t pay his bills. Strong language there. Great reason to vote for Biden. You Libs are
mental giants.

Many Demonrats don't pay their taxes but they are more than happy to raise yours. 😏

To the guy in the background calling b.s. on it all.

Good man, wish I could buy you a beer. You said it loud & clear brother!


any White person NOT voting for President Trump's re-election is an insane, demented fucking idiot.


Wasting your time BLM. No one cares about your protests or your communist terrorism. Don't like it here? LEAVE!!! Keep it up and we will run you out!!!

I agree with BLM, I support their cause. I have donated to the organization.

But protesting on Royals fans is just too cruel.

“He’s doing a phenomenal job and he has my vote. Absolutely.”

All come together back to the douchebag homosexual plaza , swimming in the fountain , have gay Man sex Homosexual contact at the glory holes at Diebel love nest with the queen of the plaza , no drama for your mama !!


thks..BLM BS ers ..for distracting the nation from the truly important story..

Do some research dude, Yellowman do more for you than last 8 presidents.

Der Fuhrer said he was going to make Juneteenth a national holiday, & label the KKK a terrorist organization.

He said this in Atlanta where he was campaigning for the Black Vote.

I'm sure this will please his white supporters.

If you want to chase away Stacy Shaw and her dirty sheep just threaten them with soap shaving cream and razors. They are dirty AF

BLMS SUPPORT IS TANKING. THEY ARE DONE

BLM IS WEEK AND IS A FAILED ATTEMPT BY LIBERAL ELITES

BLM IS AS WEEK AS THEIR MURALS

THE ELITES ARE IN TROUBLE.

BLOOMBERG SOROS AND THE OTHER ELITES CAN SUCK A DICK. BY THE WAY HOW COME BILL COSBYS IN JAIL AND PRES BILL IS BUTT FUCKING LITTLE GIRLS ON A ISLAND AND IN HIS LIBRARY SLASH PERV CLUB

Der fuhrer funkmyass, big deal, throw all 12 kkk members in jail if you want, the problem is they’re all despicable dimwits and nancy pallozas friends so.....

BLM is just the latest example of how an idea that may at first actually have some merit, is destroyed by "activists", who drag it to its most extreme with their endless and ridiculous "demands", losing public support every step of the way.
Stacy Shaw is a perfect example of a person who is so desperate for attention that she repels people one after another, who might have had some support for reviewing police procedures and might even have tried to learn enough about serious issues that they could offer some practical recommendations or ideas.
They're all gone.
And all that's left are the clueless shouters and trouble-makers mindlessly following someone like Shaw around night after night.
All completely pointless and counter-productive.
Every day is a slow news day.

These protestors and rioters are killing Kansas City's economy and sales tax revenue.

Why leave the suburbs to go to the Plaza or other venues in order to be screamed at by crazy people trying to incite a reaction so they can film a person's reaction on their expensive I-Phones.

Every day they try to incite the police and law-abiding citizens with their hatred. They throw bricks and bags of urine at the police trying to get the police to respond so they can film it.

Uncivilized behavior by these people is killing the Democrat Party which has veered off into Marxist land.

Looking forward to the cop's libel and slander lawsuits against people who labeled him a murderer - "without evidence," as the journo-lists like to say.

Derek Chauvin should do the same when he gets acquitted of the murder charge.

The only way to get to these defendants' brains is through their pocketbooks.

"...within two hours [the protesters] started marching toward the Jackson County Detention Center."

Nothing wins hearts to your side like harassment, intimidation, and physical threats.

Still not voting for the Orange Cheeto. Sorry.


We've seen this post before. Still, no one gives a shit how you vote. Probably will stay in the basement because your pos car won't run.

Sounds like the Democrats blaming others, again, for what they will/won’t do. Whatever the Libs accuse people of, they’re the ones doing it.

Study the Michaeal Jackson thing, he turned himself into a white person. So a person can be born black then change to white. And probably change back to black again. Modern technology will let you be any color you want . THEN WHAT?
People have already changed from male to female, then back to male.

Race doesnt matter now. With technology you can be any color you want.

The FBI has arrested the founder of a Black Lives Matter group in Atlanta on fraud and money laundering charges.

WATCH: Here’s Why Black Lives Matter Is a Threat to African Americans

I hope you sent a check or used a credit card. You’ll be going the way of a sedition charge.

First BLMer who breaks a window takes one in the head. Stacy gets buck shot in her fat ass.