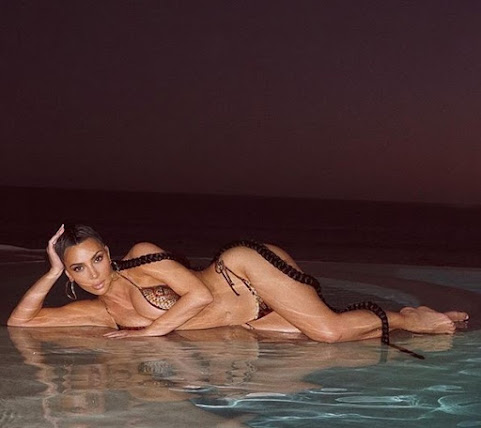 We start the early morning inspired by the enduring hotness of Kim K and her social media promo goodness that continues despite the cancellation of her show and as we check pop culture, community news and top headlines.

KANSAS CITY, Mo. - The AdHoc Group Against Crime's mission is "Promoting Healing and Justice," and they're working harder than ever during a violent year in Kansas City.

Doctors prepare for flu season as COVID-19 continues to spread

RIVERSIDE, Mo. - Flu season is on the horizon and that has doctor worried about the dual season creating challenges. We've heard the experts say, if you have the coronavirus, you're probably displaying flu-like symptoms. How to differentiate between COVID-19 and Influenza is top of mind headed into peak flu season.

KANSAS CITY, MO (KCTV) - Black men and women say they face discrimination based on their hair to this day. You've seen the videos of a black wrestler forced to cut his locs and children removed from school. Now, local groups are hoping focusing on legislation at the local level will spark change.

Catching up with the Kardashians: here's what I learned

I have not kept up with the Kardashians. I am not even sure how many there are. (I know people say this often, but in my case it is true.)


No Prez Trump, No Peace

Trump on peaceful transition if he loses: 'Get rid of the ballots' and 'there won't be a transfer'

President Donald Trump was asked Wednesday whether he will commit to a peaceful transfer of power should he lose this fall to Democratic presidential nominee Joe Biden. The president declined to do so. "Well we're going to have to see what happens," Trump said.

President Donald Trump slammed Meghan Markle after she and Prince Harry recorded a video message interpreted to be pro-Joe Biden 'I'm not a fan of hers,' Trump said from the podium Wednesday.

'You are not listening,' Fauci tells Sen. Rand Paul during a Senate hearing on the coronavirus

U.S. equity futures are trading lower, indicating that the selling from the prior session will continue. The major futures indexes suggest a decline of 0.4% when the Thursday trading session begins on Wall Street.

WASHINGTON (AP) - They were two men in Manhattan who craved the same thing: validation. One was a brash, young real estate developer looking to put his stamp on New York, the other a disgraced elder statesman bent on repairing his reputation.

KANSAS CITY, Mo. -- The Royals placed outfielder Bubba Starling and right-hander Kyle Zimmer on the injured list and returned left-hander Mike Montgomery and outfielder Franchy Cordero from rehab assignments as part of a series of roster moves to set them up for the final five games of the season.

This week we're featuring a new concept from the folks at Marcell Coffee Projects and Roasting Club in Kansas City that encourages connection in this uncertain time. It's called Have a Nice Coffee, a "new series of exceptional offerings" with a twist.

Sunny and much warmer today and through the weekend

More sunshine today and temperatures are rising High temperatures will climb to the 80s through the weekend A cold front moves in Sunday with a stronger cold front on Tuesday bringing much cooler air KANSAS CITY'S MOST ACCURATE FORECAST Thursday: Sunny and warmer with a light breeze. Wind: S-SW 5-10 mph.

Billboard #1 in 2000 Vertical Horizon - Everything You Want is the #TBT song of the day and this is the OPEN THREAD for right now . . .

Trump won't give up.

But the truth is that Biden & Harris aren't going to give up either.

Meghan Markel is ugly without make-up and lacks a feminine figure.

Send these privileged Communists back to Great Britain.

Are they even legal immigrants?

Prince Harry and his family live a lavish life-style doing nothing off the backs of British taxpayers.

This ass-wipe has no business telling Americans how to live their lives.

^^and you have no right telling us how you feel. See how that works shit-for-brains?

Revolutionary War and War of 1812 we kicked your ass.

Plus, we bailed your ass out in WWI and WWII.

The American freedoms and way of life over the centuries appears to work.

So shut your pie-hole and go back to your palace in London.

oh goody, joe biden's basement butt-boy at 8:19 is back spreading his cheer.

why don't you off yourself, you miserable piece of humanity.

And yet neither of them gives a fuck what the Great Pumpkin thinks, does, or says. Weird.

Most of it is fake weaves clipped on anyway.

Fake Hair Discrimination would be a better description.

^^You bet. Ever seen Trump's mess of shit on his head. You know he's bald as fuck. That shit is stapled to his skull.

8:18: Meghan Markle was born in California and is an American, you idiot.

You do, though, Chimpy! Lol

^^Chimpy-lives in your head. Always. Rent-free. Continue your monkey shines for us! Dance monkey, dance!

Unless he is stopped, Trump intends to be "President" until his death or overthrow.

Try to keep up, he has already announced publicly that he is planning to overturn the Constitution and remain in Office as "President" (a/k/a Dictator) regardless of the outcome of this Election.

Therefore, all you Trumpsters are also actively supporting the overthrow of the Constitution and the destruction of the United States Of America, all the while claiming falsely and loudly that you are "Patriots"!

^^True that. They claim to love America but support a tyrant who wants to overthrow it.

11:09 you are a fool to believe those twisted words from Russian bots!!!!!

Can I believe those?

Now that you called me a fool, tell me what a "Patriot" you are, Rumpletrumpskin!

I'm in favor of Trump's dictatorship. Why not? Couldn't be any worse than a swamp rat's dictatorship. It's not true, just like Trump's collusion and quid pro quo impeachment were shams, but if he was able to convince the military to not forcibly remove him from the White House, and he had whoever claimed to be president locked up or ignored, more power to him. The left hates the constitution until they need it to criticize the president. Well, if they hate it so much, then Trump will throw it out and declare himself a dictator and rule, and he will name his son or daughter to take over when he steps down or dies. Long live Trump.

^^except and this is real key here retard, the military hates him and would bounce his ass out in two seconds flat. then he gets to spend what's left of his failed life in Federal prison for tax fraud. Can't wait!

1:24: And yet the left loves the Constitution and even capitalizes it, and that's a problem for the great orange one. Weird.

Yet the left wants to impeach Donald Trump, your president, for following the constitution and nominating a SCOTUS. Weird.

^^and yet they did impeach him. Weird.

^^And he is still President. Weird.

Now go have Mommy put sprinkles on your cupcake after she makes you eat her snatch.

Help, I've fallen -
and no Male who comes near me can get it up!

Romania in 1989 knew how to handle wannabe dictators like Trump.