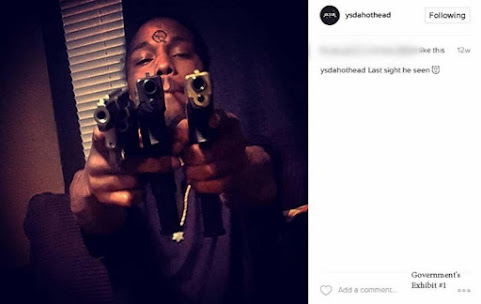 To be fair, this presser reveals a great deal of investigative and legal work that culminated in a successful conviction. Nevertheless and highlighted in this post, it's fair to argue that the defendant basically posted an online advertisement of his illicit profession.

SPRINGFIELD, Mo. – A Blue Springs, Missouri, man was sentenced in federal court today for his role in a conspiracy to distribute large quantities of methamphetamine in southwest Missouri.

Neal A. Norles, 31, was sentenced by U.S. District Judge Roseann Ketchmark to 30 years in federal prison without parole.

On Sept. 5, 2019, Norles pleaded guilty to possessing methamphetamine with the intent to distribute.

During the course of the investigation, a Missouri State Highway Patrol trooper seized nearly 2.4 kilograms of methamphetamine from a Dodge Charger in which Norles was a passenger during a traffic stop on Interstate 44 in Newton County, Missouri, on Jan. 22, 2019. During a search of the Charger, a trooper found five vacuum-sealed packages of methamphetamine, weighing approximately 2,384 grams, hidden in the rear-windshield-deck trim. The traffic stop was made while Norles was returning from a trip to Los Angeles, California.

Norles possessed firearms in connection with his drug-trafficking activities and exchanged methamphetamine for firearms.

Norles is the second defendant sentenced in this case. Co-defendant Brent A. Tribble, 30, of Kirbyville, Missouri, was sentenced on March 5, 2020, to 24 years in federal prison without parole. Co-defendants Stephan D. Samons, 30, of Camdenton, Missouri, and April E. Luke, 32, of Springfield, Missouri have pleaded guilty and await sentencing.

This case is being prosecuted by Assistant U.S. Attorney Nhan D. Nguyen. It was investigated by the Drug Enforcement Administration, the Missouri State Highway Patrol, and the Bureau of Alcohol, Tobacco, Firearms and Explosives.
############

streets are certainly safer without this joker on them. Damn.

He needed an OnlyFans.

Just another black family man, a victim of the war on drugs, put in the racist prison industrial complex for a non violent drug offense.
FREE NEAL!

IMA be a prison bitch!!!

^^^^ Yet still more social media followers than you, weird.

He looks nice enough to sell Girl Scout cookies outside of HyVee when he gets out in 30 years. He has that much time to perfect his sales pitch.

He will be getting a lot of cookies in prison.

Typical ignorant, uneducated, punk-ass bitch with an inflated ego living in the moment while hiding behind guns.

1 standard deviation below the mean? Surely not.

If we would just execute all of the murderers in prison we could lower our prison population and make room for newbies .... this is a simple fix

WASNT HE PART OF THE BIDEN CAMP

Typical black male. And they march and protest all over the country wanting the white man to respect them.

Someone needs to give him the Epstein treatment. They’d be doing him a favor.