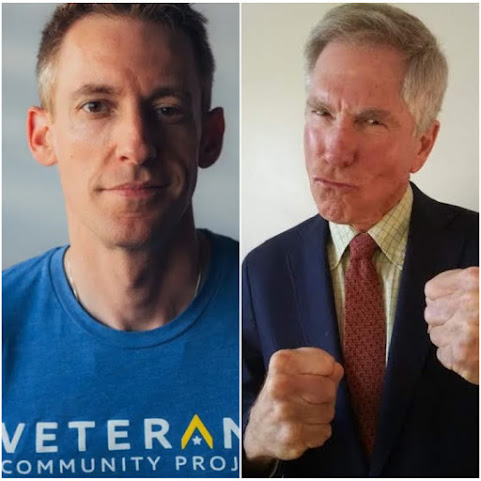 This one is just for our blog community and offers a word from this town's prolific petitioner regarding a VIRAL TWEET sent by way of a former KCMO mayoral candidate and current nationwide Democratic political activist.

Jason Kander and his fellow liberals cannot outshine President Donald Trump and his successful policies and accomplishments for America, so they attack other things about him as they try to make the upcoming Presidential election a personality contest.

"Now they seek to demonize Trump for not paying more in federal taxes. If Trump's tax attorney did something illegal on his behalf then that would be an issue. If Trump is merely taking advantage of tax law that Joe Biden did not seek to change in 47-years in office, then it's Biden's issue."

I have suffered the same fate in Kansas City. City Hall and the Star cannot out shine my ideas and accomplishments (saving Union Station, winning a light rail election, and saving the petition process) so they form a tag team and pronounce... I threatened the mayor, I have mental issues, I don't primarily reside in Kansas City and my ideas are "unworkable".

Everyday, whether you like him or not, Trump (and his family) go to work to improve America . . . President Trump is also out shining Jason Pander.

Kander is, by his own admission, mentally ill. You can't trust him.

He doesn't know it yet, but he will never win political office with a record of depression and attempted suide.

Look what happened to Joe Biden.

"Everyday, whether you like him or not, Trump (and his family) go to work to improve America . . . "

Real Republicans have abandoned this criminal, because they care about this country & the future of their party.

Praise the Commander in Chief said...

Many people believe Kander withdrew from the Mayor's race because of a MeToo problem that he could not run away from fast enough. At least two very young women, were ready to go public about his unwanted sexual advances at them. The suicide watch was Fake News to cover Kander's predatory tracks.

in reply to Jason CANKER sore loser twit to our president.
You lost he won, Your policies would leave us all broke and living in government houses eating government cheese and Jason you support stealing by BLM fucks.

A psychiatrist's dream debate!
Issues, issues, issues!
Who can possibly top the other's narcissism?
And both possible mayoral contenders.
This should really get tired 'ole KCMO on the map!

yet..when looking for an excuse to drop from the Mayor's race --he dared to scam the military PTSD issue as a sympathetic excuse! PTSD is a terrible, very real problem for true COMBAT vets dealings with their first-hand experience in the true horrors of war.

Getting all sweaty because the office A/C broke down one afternoon doesn't count! Fuck Pander!

The Democrats ate getting desperate They know they can't winning. And voters are seeing this. Small Town media is Reporting this .that is happening in there communities. And now it's on social media. With millions of hits. Look 5 Reporters at a Sleepy JOE rally and Tens of thousands at the ORANGE MAN SHOW. AND I AM A INDEPENDENT VOTER.And I can see this

The Democrats don't get it. Let the Communists Democrats take over .THE CONSERVATIVES AND INDEPENDENT WILL BE just fine .They are prepared They are in there conservative community's .They have a Cash Flow and assets. And a half a BEEF IN THE FREEZER. THE Blue City will have the biggest problem. And it won't be pretty. Remember the Conservatives are Keeping what is left of the economy going. .

Jason is a cunt as everyone knows.

Regardless of who you love or hate,
who supports criminals and lawless and who doesn't?
Unfortunately with no other choices in this election, it's just that simple.


Jason Kander is not real right that can be seen by some of the statements he has made. These has been politicians are extremely jealous of Trump because he has had the guts to stand against the globalists and there agenda not to mention he has done some historic things in this country. What I love about Trump is he beats the communists at there own game and he knows how to get their heads to explode with his comments. It's been a whole lot of fun shaking things up in this country it's been a long time coming the republicans have been far too complacent.

Jason Kander is Kansas City's version of Anthony Weiner with the sick pics of himself.

A gay with depression, and a Clay with passion!!!