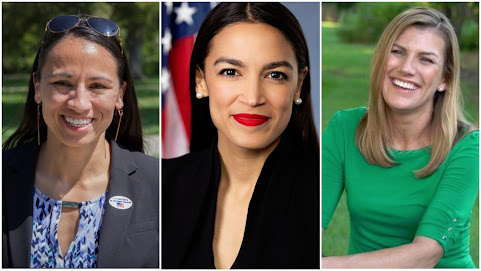 This GOP hopeful banks on branding and right-wing disdain along party lines which might or might not boost her campaign.

Check the local argument against environmentalism at the expense of economic interests . . .

"[Davids] says the Democratic-led House has held more than 70 hearings on climate change since she took office. One bill would set a nationwide standard to have a 100% clean energy economy by 2050. Another would have the U.S. rejoin the Paris climate accord. She doesn’t agree with the Green New Deal because as a resolution, it is nonbinding."

One study estimates the cost of the Green New Deal at between $52 trillion and $93 trillion just over the next decade. In addition to radical new regulations increasing costs on nearly every economic activity, it also mandates a government takeover of health care and a socialist "jobs guarantee," among other radical proposals.

better than last time around.

Mud wrestling challenge would be appropriate.

Davids needs to be tossed out on her lesbo ass.

I have to agree with Adkins


When Sharice Davids wears a shirt that says " All of my heroes killed colonizers" and then tried to explain it away.....Then YES, she is as radical as you can get and dangerous too.

Amanda Adkins would say anything to get elected, so there’s that. She got her lying skills from Donald Trump.


All the Right Wing and Republicans have is fear. They just want to scream "Communist!" and "Socialist!"

Wyandotte and Johnson County you are Lucky to have Amanda,Fighting for your community. Once the Far left takes over your community ,YOU will have a K.C.AND SEATTLE.THE middle class is on the way out inflation high Taxes ,IN the Future 50 percent of your income will go to taxes. And the other 50 percent will go to Debt. You will be a servant to The lender and the Government. Read

The Green new deal is ONE GREAT HOAX. A HUNDRED space rocks the size of mountains and Simi Trucks. Will hit the Earth Before MAN Destroy the environment. You should find out how to stop the Space rocks. The coast line will be Flooded,

Who but those JOCO jayhawkers would have elected davis in the first place? But then there was dennis moore, pretty much par for the course over there.

Retro the 80 year old HS graduate who took a biology course like 60+ years ago weighing in on climate science. Thanks Retro.

3:29 it’s all that when you compare it to killa shitty amiright!

Joco will be kc in about ten years.

No one wants to scream “communist” and “socialist”. It is just that people are becoming alarmed that the modern day idiot does not remember just how bad those ideologies are and seem willing to disregard all warnings to make the same mistakes of the last century all over again. How stupid and uneducated does someone have to be to follow the modern extreme left so blindly?

Of course it is nonbinding, bc it is a political ruse. there is no way there is going to be a 100% clean energy economy by 2050. Does not even make sense. US gets 80% of its rare earth mineral from which are required for solar panels & wind turbines, and the US is mostly capable of screwing that relationship up. Going to put wind turbines everywhere? Nuclear energy in NOT green. Oil is not going anywhere. Coal considers more environmental cautions/remedies than oil. What you can do is make the oil mofos invest more in R&D and take more precautions and responsibility about spills. Which will make it more expensive even though oil is not finite. Makes more sense to enforce clean water if interested in a healthier environment and everything else will tumble into place, but b/c corporation love to pollute water and instead pimp the lie of the Green New Deal will probably never happen.

80% of its rare earth minerals from China.

Except that the left is now defined by its attachment to explicitly Marxist agendas.

It's not a bad argument just because you refuse to engage with it.

4:02 thats because in the ole US of A mining is banned in most places where in China they don't care about the land it's all about what they can sell us.

Amanda Adkins Is a dumb cunt. There. I said what many people see and believe. Dumb. Cunt.

Sharice is a stupid cunt, so stupid that she is harmless. However, there is no way in hell I would ever vote for anyone from Cerner. To much lying and corruption for me. No vote for Amanda.

6:07 is a dumber cunt. A vote for the bush muncher Sharice, who has a bigger chip on her shoulder that your average minority, is a vote for socialism and more violence and higher taxes. She is rotten and needs to be run.

Awesome! I can't believe there is intelligence out there! YOU'RE ON IT.
Are you voting for the Third Party candidate?

4:47 no, ya narrative shit head do you want to blow up some mountains or mine uranium or something, think it easy to stop mining companies?

"Still, the critical bottleneck for the United States, and especially the defense sector, isn’t access to rare-earth ores, which are available from many countries all over the world, including deposits in Vietnam, Brazil, India, Australia, Canada, and Greenland. Rather, it’s that the rest of the value chain—processing those ores, refining them into metals, and turning that metal into advanced products like permanent magnets—is dominated by China."

“People get caught up on the resource end, and they don’t realize that China owns the metals and will continue to own that space,” said James Kennedy, the founder of ThREE Consulting, a rare-earth consultancy focused on security implications.

So far, all the steps taken fall short of rebuilding the full, mine-to-magnet kind of value chain that would be needed to ensure U.S. self-reliance of the critical materials.

“In the end, it does not matter how many rare-earth mines the United States opens. It does not matter if they are upgraded to produce mixed or separated oxides,” Kennedy said. “Nothing matters until we figure out how to overcome China’s control over metal production.”

^^^^ Simple, @9:38 recycle!
The US has sufficient metals, including "rare earth" within its borders to maintain its current levels of technology for at least a decade. The problem is that we do not re-use that resource efficiently.

10:04 is recycle efficiency in the 250 year plan? Because it is not looking very simple. Waiting for Besos, Gates, and Buffett to spear head that.