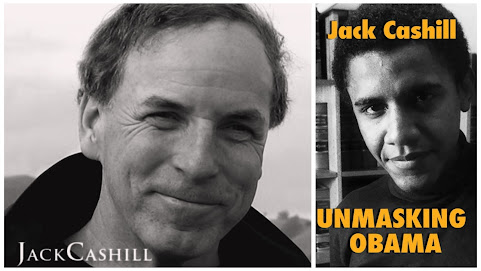 Like many conservatives, Jack Cashill is quickly losing patience with the Republican Party elite and their puppets.

Sadly, in this cowtown's MSM scene, anyone right of AOC is typically silenced and compared to a war criminal given that Kansas City media is dominated by partisan hacks or spokes-models content to report on press conference garbage and chase worthless social media likes. That's unfortunate because INDEPENDENT AND CRITICAL THINKERS should at least take notice a book that's quickly garnering traction online.

What's really interesting about Mr. Cashill's latest work is that he seems to express a frustration with establishment right-wing media with nearly the same level of angst as his contempt of former Prez Obama. This perspective is important because it provides printed proof that American political ideologies are growing increasingly fractured and divisive as legacy media struggles to maintain control of the discourse.

From the excerpts we've read so far, Mr. Cashill continues to bring a creative and thoughtful analysis to the table as he finds a larger audience among those who are skeptical of rhetoric from any mainstream vantage.

Given that former Prez Obama will likely be a major influencer of the upcoming election, this book not only offers an ALTERNATIVE perspective on a historic American leader but also holds the entirety of the media world to account for how they have helped to carefully craft his legacy.

Townhall: Unmasking Obama -- A New Portrait of an Opaque President

Cashill is no fawning observer of the “right-wing” media, of which he is highly critical. He is careful to separate those whom he sardonically calls the “Responsible Right” from the truly intrepid “Samizdat” right-wing media, borrowing a phrase used for the brave reporters in the former Soviet Union who risked everything to get the truth out about that oppressive tyranny. The Responsible Right journalists are the often sneering and always staid upholders of the conservative status quo, not wanting to be dismissed in Georgetown salons as “fringe lunatics.” The Samizdat journalists are those who have doggedly sought to expose the malignant nature of Obama and his backers, while facing the opprobrium of their “betters” in the Responsible Right."

I don't always agree with Cashill but I do respect his work ethic and talent. If we had a real newspaper in KC, he would be one of the last columnist working there.


the worthless uber-lib MSM slavishly grovelled before Barry for 8 long years while he ran the most corrupt presidency in American history.

^^^
BULLSHIT!
SHEER UNADULTERATED BULLSHIT, WORTHY OF "THE EPOCH TIMES"!
Coolidge
Hoover
Nixon
Reagan
Bush 1
Bush 2
Trump
On their best days, were too filthy to sweep the basement at the White House!
Tinfoil Hay Brigade wishing can't make facts wrong!
I exempted Eisenhower from the above list because he was always too confused to be corrupt.

It's because many republicans have been coopted. Controlled opposition to the monolithic leftist religion.

Read this and you'll understand why we're in the state we are.

So you listed names but won't cite how Clinton accepted foreign election interference to benefit his reelection and then he gave away nuclear technology to communists against the advice of all intelligence agencies.

And then sent his lackey national security advisor to steal evidence out of the archives. He took it home and destroyed it and was convicted of felonies for it.

Not to mention Filegate where the Clinton's illegally obtained the FBI background check data on most of Washington so they could black mail them.

This isn't fringe - this is public record.

Then they repeated their pattern of sedition and treason by illegally obtaining a bogus warrant to spy on Trump and his campaign (their lackeys are starting to plead guilty and their coup never got anywhere close to Trump).

Not to mention the OPM database hack Hillary oversaw while she was at State.

They let China have our database on background checks for people with security clearances. China ended up killing all our spies.

Democrats know they are evil, so they lie and lie and lie. The facts actually damn your false religion.

President Obama sure did take a long time to finally endorse Joe Biden for his 2020 run. The world couldn't help but notice that Biden's former partner in crime didn't exactly hop at the chance to endorse Biden after it was clear that Biden would be the Democratic candidate for 2020.

President Obama has "privately expressed grave concerns" about Biden's run for the White House, according to a stunning new report from Politico. Obama reportedly said of Biden:


Speaking of Biden's presence in Iowa during the caucuses Obama said:

“You know who really doesn’t have it? Joe Biden.”

Wilson introduced segregation, but that's ok he was a progressive. His eugenics also inspired Hitler, another progressive. Banned hunting, for instance. Animal rights and all.

FDR was another progressive who interred countless minorities in concentration camps. He stole poor and middle class Americans' wealth with an EXECUTIVE ORDER and lied about it. His administration also protected fascists who were guilty of trying to foment a coup.

Your lies only provide a foothold for the truth to take root.

But you're probably addicted to lying because the Democrats won't ever provide you with any substance besides destruction, theft and misery.

Hello Tonyskansascity are you Ready to ROCK.ARE you Enjoying the Show. The Democratic Socialist are Burning City's Tossing ice Bottles at Cops The moderate Democrats are Running not Walking away from the Democratic party. AND THE OBAMA ADMINISTRATION DEEP STATE IS beginning to be implicated in criminal activity with indictments. And Sleepy JOE WHERE IS HUNTER .ISN'T THIS FUN.

And yet Jack Cashill is a complete prick. Weird.

And The MAIN STREAM MEDIA IS HELPING TRUMP GET REELECTED .

I voted for Obama, but after watching the Democratic Party harass and try to take out a duly-elected president and his staff during the last four years with false charges and lies, they are now the most dishonest and despicable party in American history. Adam Schiff is the poster child of their dishonesty, saying he had direct evidence of Trump-Russian collusion for years, yet he knew he had nothing. The Dems are the party of open borders, weak police and military, not holding criminal accountable and letting them out of jail or post bond too easily, job destruction, high taxes on our paychecks, aborting babies even after birth, and violent lawlessness. No thank you!

If the press pushed investigations of Obama's attempted to over throw the government him, Hillary, Biden and most of their administration would be hung for treason.

And yet, he isn’t. And Dr. Cashill is far more intelligent than you. His investigative writing brings the disinfectant of light to MSM bullshit and undeserved and unfettered fawning over left-wing candidates. I preordered this book and can’t wait to read it.

Obama hasn’t been president for 4 years. Let it go.

When reality proves your political party is evil and operates for personal profit off the spilled blood of Black Americans, all they have left is personal attacks and lies.

Only someone who refuses to accept the rule of law would try to get others to walk away from seeking justice.

You're the same people who didn't want the Feds to come help find LeGend's killer. Evil doesn't begin to describe you.

Cashill sounds like he's running for a job at the White House, in the newly created position of "Chief Obamma Slamma"!

Higher taxes, condoning violence and lawlessness with their silence, not holding criminals who clearly break the law accountable, weaker military, open borders that strain schools and social programs, anemic economy, abortions even after the baby is born -- what's not to like about the Democrapic Party?

Obama was a great president. Smart, classy, honest and ethical. If you still support Trump after almost four years of lying and obvious corruption at all levels of his administration, you are beyond stupid. Trump supporters lack the class to see that he has none. They feel marginalized and desperate to have any relavence in a world that is leaving them behind.

@7:50, Higher tax burdens shifted onto the Middle Class, encouraging violence and lawlessness with Twitter posts, pardoning criminals who clearly break the law, weaken the military by funding cuts and misdirecting funds, leaving open borders while fraudulently claiming to build barriers, ignoring the plight of children and families -- that's what there is to like about the Repulsivican Party!

Democrats have to lie in order to pretend they have any reason for being involved in America, in any way.

You must be living under a rock. Obama spied on the Trump campaign before and after the election. Lied to us about Obamacare. Weaponized the IRS. Sent billions of dollars to the supporters of terrorism Iran and allowed Biden and his family to reap millions of dollars from foreign countries!

We had to listen to Obama blame Bush for 8 years of his presidency.

^^^ Sort of the way Trump has been blaming Obama for four years?

At least Obama handed Trump a booming Economy, going well enough to last through the first two years of his Administration before Trump managed to screw things up enough to slow it down and eventually crash just the way Bush had done. Don't forget that Baby Bush gets credit for the third greatest Economic setback in recent times, only outdone by Hoover (#2) and Reagan (WINNER!)!

Been listening to cashill whine since attending his smarter half's colloquium at UMKC in the 90s. Spouled boomer curmudgeon.