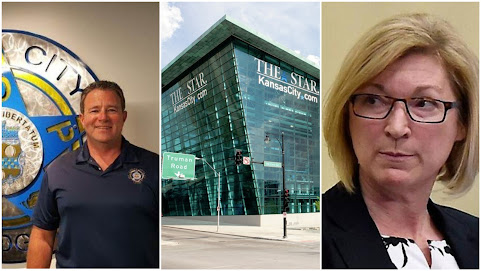 This post is too important for much prologue . . . Overnight this Kansas City note has blown up and reveals a worsening relationship betwixt local authorities and institutions.

Well no surprise another completely one-sided and utterly disingenuous article from the Kansas City Star. Clearly, if it doesn’t fit their narrative they just don’t print it. Here are the real facts:

The Star: Cameron Lamb was in his own car.

Reality: Cameron Lamb had beat his girlfriend, later got into another altercation with her, and chased her IN A STOLEN TRUCK through the streets of Kansas City while CARRYING A STOLEN GUN. The truck was stolen. Cameron Lamb knew it and HE tried to conceal the truck by immediately painting it. Cameron’s girlfriend provided a statement that she knew Cameron Lamb stole the truck and where it had been stolen from.

The Star: Cameron Lamb was in his own backyard.

Reality: When officers arrived at the home where Lamb went immediately after chasing his girlfriend, they were told by a woman living there that she did not know Lamb or anyone who was in the backyard. Officers reasonably believed that Lamb was hiding from officers and engaged in criminal behavior. They also believed, based on the statements of the woman at the home, that he was trespassing and had no right to be in the backyard. They entered the backyard to detain a suspect that they reasonably believed was engaged in criminal activity. Lamb pointed the stolen gun at officers and Det. DeValkeneare had to respond.

The Star: Lamb could not use his left hand.

The Star: The Department stymied the investigation by not providing a probable cause statement.

Reality: The Prosecutor does not need a probable cause statement. Any Prosecutor suggesting otherwise is a LIAR.

The Star: Det. Schwalm did not see a gun in Lamb hand.

Reality: Det. Schwalm could not see the gun from his position, but a gun was found underneath Lamb’s left hand outside the rolled down truck window just as Det. DeValkeneare described. The gun was reported stolen. Witnesses told police that the Lamb liked to carry .45 caliber pistols and the gun found under Lamb’s left hand was a STOLEN .45 caliber handgun.

All this evidence was known to the Prosecutors and they still worked tirelessly to indict an innocent officer.

Here are other things you will never hear in the Star that the Jean Peters Baker knew when she presented the case to the Grand Jury:

1. Lamb’s family member worked at the prosecutor’s office. Nevertheless, the prosecutor still allowed him to be involved in the case.
2. There was an additional witness in the backyard who saw the incident. He gave a statement favorable to Det. DeValkeneare immediately following the shooting. Two days after the shooting, that same witness came back to the department and said that he was being pressured to change his story and lie about what happened. He gave numerous statements about the amount of pressure he received to change his story by Lamb’s family and their civil attorney.

DET. DEVALKENAERE IS INNOCENT. HIS ACTIONS WERE COMPLETELY JUSTIFIED AND SAVED DET. SCHWALM’S LIFE. HE IS A HERO NOT A CRIMINAL. ASK YOURSELF WHY IS JEAN BAKER HIDING THESE FACTS. BECAUSE SHE DOESN’T CARE ABOUT JUSTICE. SHE ANOTHER SELF-CENTERED POLITICIAN WHO IS WILLING TO PUT A DECORATED OFFICER AND HIS FAMILY THROUGH HELL FOR HER OWN POLITICAL GAIN. DON’T BE FOOLED. THESE ARE THE FACTS. AND THEY ARE UNDISPUTED.