Amid criticism and protest, the KCPD push back against detractors today.

Here's the stat that started their midweek media blitz that's typically a lot less busy than weekends with rampant gunfire and homicide . . . 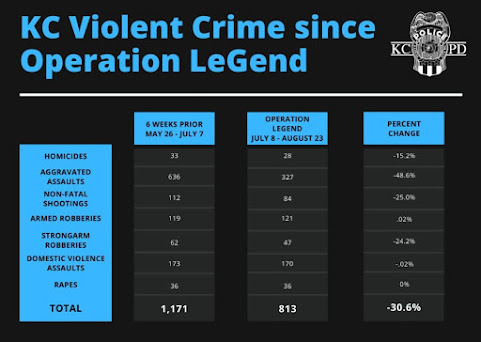 And then, the Chief offered his perspective . . .

"Despite a record-high workload, the Kansas City Missouri Police Department is maintaining a clearance rate that is well above-average for homicide cases. Our solve rate is even higher.

"Our clearance rate is recorded as a Uniform Crime Report (UCR) rate, as mandated by the FBI. Our UCR clearance rate is 70% today. The national average is 62%. UCR is based on casework completed this year compared to total homicides this year. It gives credit to all cases solved in 2020, regardless of whether the homicide occurred in years prior.

"As of today, we have cleared 62 homicides from 2020 and 27 from previous years, for a total of 89. Just last week we identified persons of interest in two 2019 homicide cases. Our detectives and crime lab staff deserve for their work to be counted on those cases, as well, which is what UCR does. We will never stop seeking justice on unsolved homicides."

Seems like they're doing the job they were hired to do. Can't say as much for the prosecutors and judges.

Stay in Overland Park and try to feel safer.

1:45 but communists keep coming in to overland park to terrorize. So your insults and lies don't really land.

From day 1 in office, Trump directed the DoJ to step up federal enforcement. The court data is clear that he reversed the trend Democrats always do to lower enforcement.

It had effects because violent and property crime levels were reduced. For the first time in 40 years, overdose deaths dropped.

But Democrats profit from minorities being slaughtered. The state audit of the Combat Tax fund proves this. Peters Baker is now in charge of it...

Democrats have to lie about these easily citable facts because it eviscerates their 'policy' goals. I put that in quotes because they admit to having two sets. The publicly stated policy is obviously prevented from being believed by these facts. Their private policy is the elimination of the Republic and we see this on display every night across the country.

Now we see Operation LeGend working. And the left starts crying like stuck pigs about it because they want that money by any means necessary.

Most white people think this is a good thing. Most black people do too. Don't bet the farm on defunding the police. Even stupid KCMO voters will not like that one. BUT then, the other story is it took an outside law enforcement agency to come in and get this done. What does that say about the Dept?

And the totally idiot black politicians and agitators hated that the Feds came and helped solve murders. They are KCMO's biggest problem. Fools pretending to know the way. Thank God I don't live there.

^^Then what in God's name on you doing on here Maude??? OMG, you don't live here but you come on here?? You pathetic loser! LOL!!!! God, why are old people such losers!!!!

Their race has nothing to do with the fact Democrats profit from minorities being slaughtered. https://www.kshb.com/news/local-news/missouri-state-auditor-outlines-issues-with-combat-fund-spending

2:26 what these idiots don’t understand about defunding the police is Jackson, clay and plate county sheriffs have to take over if they did get put out of business which means taxes will go up because now the sheriff’s depts in all three counties will have to hire more deputies, these morons are incredibly stupid to think no law enforcement depts will fill in the gap. I didn’t even mention the state which they have no control over will help fill the voids too.

^^and yet defund doesn't mean no police. Stpuid geriatric fucktard!

2:47 Democrats have to lie. Their own policies prove their propaganda is false.

Profiting off the PREVENTABLE deaths of minorities is evil.

Why not give it a trial run. Instead of cops, send out social workers for a month to deal with potentially violent confrontations. Their success will be measured by a comparison of how many dangerous situations they defuse and how many of the social workers are still alive at the end of the trial term.

Operation Legend is far from successful. Success would have been at least 300 hood rats shot and killed. No probation from Jean Petersucker Baker and the liberal fag judges. Just results.

Stpuid? Did you go to KCPS? You look really stupid when you call someone else stpuid.

2:47 doesn't know the definition of "abolish" damn communists are unintelligent

The KCMO homicide clearance rate would be a whole lot higher if there were any leadership or cooperation from the demographic group and neighborhoods where the vast majority of the murders take place.
Thinking the cops are going to "solve" crimes without any cooperation from residents is the sound of one hand clapping.
Even $25,000+ rewards don't do the job.
The next black "leader" who identifies the real problem will be the FIRST to ever do so.
And that person would be a real hero to the majority of east side residents who would very much appreciate not having to live in the violence-stressed places they do now.
So who has the guts to be FIRST?

"Show us on the doll where whitey hurt you ok?"

2:47 Defund - to remove the funds from (a person, organization, or scheme)

You dimwits are truly the dumbest people on earth. Here’s your proof, “Stpuid” you can’t spell stupid even though it’s tattooed on your forehead.

Bandit, you hurt people with your hateful language for minorities. You're trolling when you call people names. It's why your messages don't matter.

If you focus on the ideology, behavior and party then you don't need to devolve into this antebellum bullshit.

Maybe you want a school yard tussle but Americans should be better than that.

You harm conservatives with your trolling way more than you rile up Democrats.

Does the dead guy found in the donation box count as a homicide or a donation?

^^ Dr. Rex Archer will count the poor dude in the donation box as a corona virus death to bump the numbers.

So they find Grandpa in the basement dead of a heart attack and decide to donate him to Goodwill to avoid the funeral expense?

I could care less if I bend somebody's feelers. Call it as I see and if it makes them feel bad they can go to their safe space and color pictures of unicorns or whatever. Get the looters and shooters under control and then we can discuss vocabulary.

Bandit - you didn't even read what was written. You make the entire Right Wing look bad with the why your monkey language. You may not have shame but you do understand that you have agency, right?

So you're fine walking around without pants on and blaming others for recoiling in disgust but you're the problem you don't like, too.

It verges on psychopathy because you don't care about the harm you cause.

Focus on the issues, not trying to be a troll. Otherwise, you directly harm the president's reelection chances when you confirm the left's bias about the right. You might as well be a communist with your behavior.

Again, I don't say this thinking you'll feel shame. I think yo don't have that skill. So consider the impacts of your behavior.

I'm not a representative of anybody but myself. Going to refer to events as I see them. If it bends feelers so be it. Ask me if I care. The shit I say is a helluva lot less insulting than what comes out of the mouths of blm and idiots that represent the Demonrat policy. Hell, it's a lot less insulting than 70% of the stuff posted here. Clean those jackasses up and then we'll talk verbiage. I ain't out there running around burning, shooting and looting. If I were I'd get a pass. Point taken but it's not changing anything. Not taking the McCain "my friends" route. That got him fucked up the ass (and deservedly so). Had enough of the behavior police as it is.

The outside agency is all feds. Surveillance and intelligence based. KCPD the ones hitting the streets for the arrests. What it says is that if manpower was adequate arrests would go up.

Bandit - communists invented whataboutism. And you're using it. It isn't an AK, it's a gun that only shoots the user in the face.

So you're just a communist who hasn't cut off "it's" own genitalia because you won't commit.

Except that he is voicing, perhaps inelegantly, the core of the situation. Democratic leaders are failing and people are dying while the vitue signaling goes on and on. Michelle Obama shamelessly identifies police as the problem when the issue is lawlessness pure and simple. BLM is a silly, avowedly Marxist looter flash mob.

Law and Order has worked for Thousands of Years!
Things that don’t work don’t last! What else has lasted since the beginning of time is the Haves and Have Nots ... Geriatric Guy is just mad he’s a loser and always will be. You can do NOTHING about it.

Work on those metaphors, 6:27. They are sort of weird.

Also, Bandit, please keep going. If there's one thing we know, it's that nothing will change the Orange Man Bad psychosis of the left.

Bandit illustrates the dark beating maniacal heart of every racist ideology. He caricatures racial hatred. Not that vile language is specific to any race, but this is your opportunity to observe a genocidal white mind hard at work. He is systematically doing the basic narrative grunt work necessary to incite racial violence.

He is immune to shaming because he is without shame. He may be uneducated but he is whip smart, effortlessly turns a clever phrase as if pulling it from a drop down menu, and is mean as a rattlesnake. To my way of thinking, it is better that he vent his grandiosity here, outing vile supporters.

Hold that thought. We'll get around to you when you have something worthwhile.