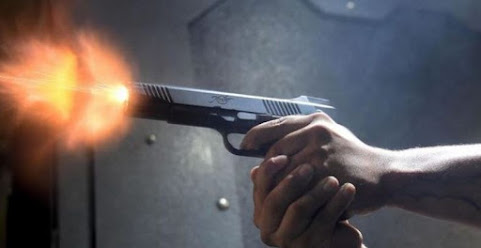 Tonight's latest update on the consistent spate of gunfire and killing in Kansas City proper . . .

KANSAS CITY, Mo. - One person is dead following a shooting Saturday night in Kansas City, Missouri. Police responded to the area of West 39th and Wyandotte streets shortly after 10 p.m. on a shooting call. The victim, who has not yet been identified, was an adult male.


Neighborhood shaken after shooting leads to crash into home

KANSAS CITY, MO (KCTV) - A Kansas City neighborhood near 89th and Wornall is shaken up after a shooting occurred and resulted in a vehicle driving into the side of a home. The incident happened before 7 p.m. The police officers and the police tape are now gone, but what still remains is a hole in the side of the home.

And whilst we don't want to be flip about a serious and deadly situation, it's our Saturday night tradition to post a playlist and so we mark this tragic occasion with songs that hope to discourage violence . . .

KC back on track after the rain.

Both in white neighborhoods...

Not so quick commie.... The names will come
out tomorrow.

Yeah, don't get ahead of yourselves trying to create a narrative, Gwen Grant. It's not like only white people have cars. Genius.

Meanwhile, in the major leagues, Baltimore has 195 murders and Chicago has 451.St Louis finished July with 153. Our all time record for a whole year is 153. Our hood rats are inept and unmotivated.

What is the suspects description?