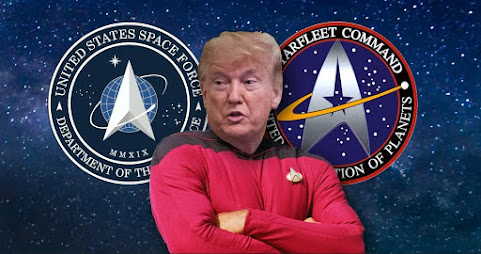 FINALLY . . . We've got some good news to share as we move one step closer toward an opportunity for TKC to ditch this dump of a blog and undertake intergalactic adventures just as so many late 20th century sci-fi movies promised . . . Checkit:

KANSAS CITY, Mo. — A low-profile effort, with exceedingly high stakes, to build a new headquarters for the U.S. Space Command in Missouri has survived the first round of cuts.

According to multiple sources familiar with the situation, the Missouri push for the military headquarters could put the new command station in Kansas City . . .

According to a recent weekly update from the Missouri Military Preparedness and Enhancement Commission, the Air Force has requested more detailed proposals from Kansas City, St. Joseph and St. Louis. The deadline is Aug. 31. A decision isn’t expected until after the November election . . .

Fox4: KC metro in running to serve as headquarters for US Space Command

Put it at Whiteman AFB. At least the prevailing winds will carry the fallout away from KC if when the nuclear bomb drops.

There are already plenty of space cadets at the KCMO city hall.
And there's a ton of empty commercial real estate in the vibrant downtown urban environment.
Maybe this is a way to get some people in the empty new hotel.
Seems that Whiteman is the most likely location under serious consideration, although the breathless hype from the usual KCMO suspects will continue until the decision is made.
Just like the Amazon deal.
Frosty!

Trump is playing the idiots at city hall plain and simple, and they’re so stupid they believe it, I’m betting a special tax is in the future to pay for all the fake information from building them a special building and tax abatement. qball and the clowncil will spend millions of dollars and hire 10 new people at $150,000 as a special advisors. You know, kind like all the things sLIE did trying to get Amazon here!

No, the "Space Force" will cease to exist in January.

Nobody in any Branch of the US Military wants this, and any functions it could possibly serve are already being carried out satisfactorily by those existing Branches.

A ridiculous concept, merely created to try to disguise the damage already done to the Military by four years of misfeasance and sheer malfeasance during this failed Administration.

^^^^ Thanks for finally agreeing with 70% of the US Population!

Thanks for demonstrating your obsessive psychopathology! Lol

Presidential Intercranial Space - The Final Frontier!
These are the voyages of the Starship Wherethehelldidthatcomefrom,
as it continues its four year search for intelligence!

This one went Area 51 as expected. Disappointed no grassy knoll talk came up though.

Like everything else, China will try to take control of outer space and place thousands of weapons aimed at America there unless we have our own plan to counter that. The Space Force is a brilliant idea.

yes to the space force.

Agree with 10:14. Privilege if we have it here and would be awesome!for KC area. I would consider Johnson County somewhere.

Why would they put the (ridiculous) Space Force Command in a state where most people believe Jesus lives in the sky and that the world is flat? The meth and incest tends to mitigate against serious science as well.

^^ Yet, you choose to live here. What does that say about you?

So do you. Weird.

I moved here for the non stop black on black murders myself, I love it when the blacks kill each other over chicken, shoes, a look, spilled sugar, hoes and whatever else stupid they kill they selves for, it’s fun to watch all this shit happen! And with the added benefit of having petersuckers catch and release program so we can always challenge the murder record set by that other black mayor, what was his name again? Oh that’s right! It was the cleave! Hahahahaha!

Meth heads are just brain dead zombies, they’re no fun at all!

West Central Missouri is the best Place,For a Space force. No Hurricanes,Great Recreation areas for employees .A FEW hours by Plane to most places in the U.S.GOOD AMTRAK SERVICE.

I'm for this new branch. I like the idea of putting it at Whiteman, but I seriously doubt that'll happen.

I have a list of people I'd like in the Space Force (and luanched out and airlock).

Space Force jobs after the next election??? I'll add that to the long Christmas list of magic vaccines, cancer cures, secret trade deals and world peace.

In the meantime, I'm still waiting for the big beautiful Earth Wall on the Mexican Border from the last election!!! Where is that????????

Fool me once, shame on you. Fool me uh twice, uh... won't get fooled again.

More bullshit from the biggest conman bullshitter to ever bullshit a bullshitter. Anybody that still believes this asshole is a real asshole.

I'm still waiting for my $300 Trump unemployment check from last week! Where the fuck is that?

In all ways there.

Biden will loose in a historical landslide for Trump. He is a senile thief running with a half breed bj giver. If he had anything to offer he had eight years ti get the do nothing he served as vice president for. God knows Obama needed the help. Trump has passed and changed more things for the better than the last four do nothing idiots we elected.

5:09 don’t fall for the troll and her stupid lies, just ignore her like everybody else does.

Spits out his Coca Cola laughing.