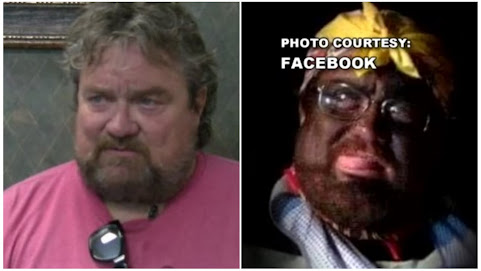 St. Joe is a nasty little town that most people leave quickly after snagging a good enough degree. There's one street that hipsters have attempted to make nice and the rest of it is gas stations & strip malls. TKC can't emphasize enough how horrible of a place this town is . . .

And now a council dude fights for his flyover country position of authority as social media uproar threatens to cancel his tenure.

Reality check: Whilst this story makes for great social media "rage pr0n" it's also likely the council dude might survive if only because NOBODY cares about St. Joe -- Especially the people who reside in that trashy cultural wasteland that's only famous for helping along Missouri tooth decay & diabetes by inventing and manufacturing the Cherry Mash insulin spike.

KQ2: City councilman and deputy mayor Kent O'Dell is defending himself after photos from a 2012 Halloween party show him in blackface.

O'Dell has defended his position on the matter saying he does not offend people and is not racist, he said he believes the controversial photos were released for other reasons.

"I'm not leaning the way some people want me to lean on some decisions," he said. "It's been on my wall for years and all of a sudden this has become an issue,"

O'Dell's constituents upset by the photo say there's simply no excuse for it.

St. Joe is not that bad.

His nickname is "Spanky." Pretty much says it all!

How the hell did that movie "White Chicks" (2004), where two black actors play white women, ever get made?

How the hell did that SNL skit where Eddie Murphy plays a white bus occupant ever get made?

I'm still mad as hell over these cultural appropriations, and I'm not going to take it anymore!

No one will protest this because no one, black, brown or white, gives two shits about that crummy town.
Hell, even the catholic priest blew his brains out to leave.

"I am not racist; me in Aunt Jemima blackface picture has been hanging on my wall for years and now someone is making an issue of it".

Probably not the defense the Deputy Mayor should be using.

Outcry, outrage, backlash! Oh my!
Pandemic, murders, violent crime and riots.
Old photos of costume parties should not even be a hairs concern on a pus filled pimple on the STD infected ass of any offended segment of our society Black or White. Society is in a perpetual state of heightened needless offense.

Of course now that he has been exposed, no apologies will suffice, ever. Apologies, kneeling, even bloody self flagellation will not escape the Roman thumbs down of the cyber mob. For this horrendous, unforgivable act he must be shamed and his life destroyed.

In context of a violent diseased world does this in anyway rise to the level of anything more than the act of impersonation that it was? Now if he had hung himself in that costume then it might have been a hate crime. Then we could waste our time reporting on and discussing "suicidal racism".

St. Joe is a carbon copy of Skidmore except with more people. This guy must be the Ken Rex McElroy of St. Joe.

It was Halloween so who gives a damn. Some snowflake wanting a meme monument.

^^Nobody really cares. Only half-dead geriatrics like you on here do. Don't you know when you're being trolled dummy? Don't answer. Nobody needs another Simpledave post.

I'm so upset white people are tanning and black people are straightening their hair. When will this madness of cultural appropriation stop?!

1:51 - You really should try getting a job. It would help your self-esteem and ease your anger issues.

He'd not have a problem if he said he was a Beautiful African Queen. #JoyBehar

He looks pretty incompetent and we've already said his reasoning is stupid. If he's forced out. No big loss.

RE: "..cultural wasteland that's only famous for helping along Missouri tooth decay & diabetes by inventing and manufacturing the Cherry Mash insulin spike."

is this story true?

It was Halloween for Gods sake!

If a black person wore “white face”, which they do. Everyone would laugh and have fun. I have
never seen a more thin skinned group of people than blacks. The absolute biggest bunch of whining babies in the world. Grow up!

He should just say he's evolved. That's what Jimmy Kimmel did and he still gets to host the Emmy's and keep his talk show. Apparently, ABC doesn't care if you're racist.

Negroes and their pals need to grow a pair. This bitching day in and day out about being offended is ridiculous. Most everyone could find something in the world that offends them. It’s called life. You can either move on, be productive and live your life or you can remain butt hurt, play the victim and be a douchebag. Don’t be a douchebag.

He really did not do the blackface well. He would have to kill some people and deal drugs to be more realistic. Have Black lives matter make excuses for him 24/7.

According to "make the baby comfortable then kill them" Ralph Northam, shoe polish doesn't work too good for blackface because it's hard to get off the next day.

Move along, little too late for the outrage.