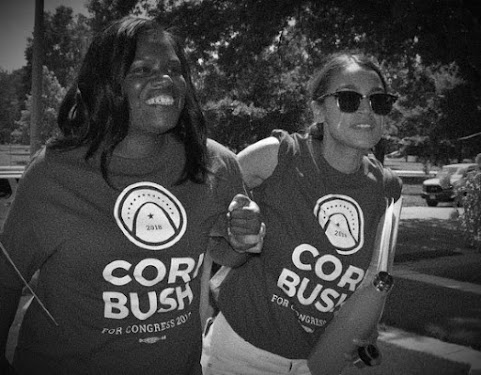 Political pundits across the nation are taking note of a Missouri Democratic Party upset and a sign of change in STL - It seems the 2nd rate town is becoming EVEN MORE PROGRESSIVE in the run-up to the November election.

Here's the headline roundup and a sign of the times as urban STL elects a very good buddy of Rep. Alexandria Ocasio-Cortez.

The Young Turks celebrate on behalf of Justice Democrats:

AOC has a nice set of titties.


So is Cori Bush going to wear a racist shirt like Lacy Clay had on? Seems like these colored women like AOC, Cori Bush, Lacy Clay, and Sharice Davids like to flaunt their racism and then blame white republicans.

Oh and 5:37 You can't even see AOC'S titties do you even know what they are?

7:12 retard lickbag, Google AOC tits and check them out. She has a really nice set of titties.

I think AOC can be attractive, if horse-toothed, screechy clueless liberals are your thing. But, I disagree with the "massive" adjective. It's a primary. In Missouri, barely 20% voted. Most don't care about local representatives (which is a shame). Sidenote: Ivanka has great tittays.

5:37; don’t touch! AOC’s titties are probably collateral on some past due loan she has somewhere.

Hey Bandit-another long day & night of saying "Qball" & "Dem this and Dem that". libtard and all the same boring things you repeat on here ad infinitum ad nauseam? So sad.

Bandito, Ivanka's Doctor should have taken those implants out of the Tupperware Containers first, then her Vinyl Rack might look better.

That picture pretty much tellS you all you need to know about progressives and BLM.

No need click arrow to play/listen to victim vid rant/screech/yell/scream.