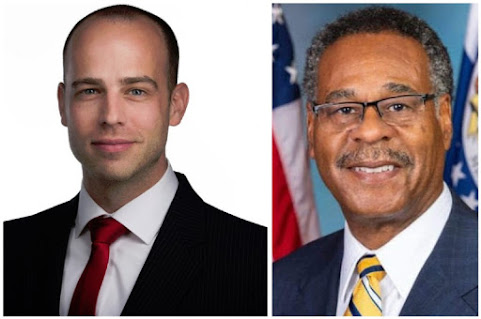 "On Saturday, August 8, Derks selected Emanuel Cleaver Blvd. to do a trash pick-up. In less than 12 minutes he, by himself, filled two large bags full of trash. “It’s a disgrace that Rep. Cleaver is oblivious to the fact that the street named after him is so full of trash. Does he not care? Where is he? And, where was he during the riots and protests in Kansas City?”

"From today until November 3rd, Derks will be on Emanuel Cleaver Boulevard at 9am picking up trash for 1 hour and is inviting everyone in the district to join and send a loud message. “This man wags his abnormally long fingers at us telling us to be better while he can’t even keep his own street clean.”

A bold video call out from the upstart challenger:

Anonymous said…
Trash clean up is a good idea.

Bandit said…
Why would Cleaver worry about a street named after him looking like that? He doesn't give a flying shit about Kansas City. It was just a stepping stone to him. He's more concerned about stoking racial tension.
8/12/20, 6:02 AM

Anonymous said…
If someone would just offer Cleaver a couple million dollars for him to spread around "the community" so that he'd get their votes next time, he'd be all over picking up trash on Cleaver II or anywhere else in the city.
He's a good time old fashioned pay-to-play bring home the bacon kind of elected who's motto is tax, tax; spend, spend; elect, elect.
And he's one of the major reasons the east side is in the terrible condition that it is.
The notion that he "represents" anyone other than himself is laughable.
8/12/20, 6:04 AM

Anonymous said…
Just another of the Dorks trying to unseat Cleaver.

Black Activist said…
Kamala won't be putting up with this cracker insulting a man of God like that. The hammer about to come down. I'm collecting IP addresses and sending them straight to Kamala. Prepare to relocate to Troost and Benton Blvd.
8/12/20, 8:40 AM

Anonymous said…
unsolicited bulk mail is so they can figure out if someone has died alone.

Anonymous said…
In white neighborhoods there's rarely trash lying around in grass or streets but what I've noticed in mostly black people neighborhoods in trash in a lot of places - like 50 yard stretches of grass lined trash, fast food garbage just lying around on the streets like eat the sandwich then toss out the window - ain't nobody looking.

Anonymous said…
oh that why people litter, b/c ain't nobody looking?

Anonymous said…
“Does he not care? Where is he? And, where was he during the riots and protests in Kansas City?”

The quick answer is no. Where was he during the riots? Uhhmmm. I’m sure it’s his goons/followers that help orchestrate the protests. He wasn’t there but certainly being briefed on it and making suggestions/recommendations.
8/12/20, 12:28 PM

Bandit said…
Cleaver knew damned good and well what was going on. He cheered it. He simply doesn't give a shit. Symbolism over substance. Race above everything else.
8/12/20, 12:31 PM

Anonymous said…
Foolish stunt, and meaningless. The City is responsible for cleaning streets. Does this GOP twit think streets get cleaned by the people who bear their name? Who cleans Main Street, or 63rd? Cleaver continues to serve us well. He offers substance, an unknown concept to his opponent.
8/12/20, 12:47 PM

Anonymous said…
If Congressman Carwash doesn’t care about paying his debts, he sure isn’t going to care about picking up trash along his namesake street. Derks appears to be a breath of fresh air, but never expect KCMO voters to choose any candidate of quality; if they did, the city wouldn’t be the deteriorating shithole that it is.
8/12/20, 12:57 PM

Anonymous said…
Sky James and the Council defunded a $2 million trash pick-up city service a couple of years ago. This was refunded by Q when he became Mayor.
My theory is that the Council has a very high degree of tolerance to having trash in the streets, roads unmaintained and high levels of crime in the City. This may not be a learned trait but one which is a part of the DNA.
8/12/20, 1:07 PM

mommylinda said…
We know someone who owns commercial property on Cleaver Blvd, and it is a constant battle to keep it free of trash. People come at all hours and dump loads of tires, nasty mattresses, broken furniture, and old construction material. These people are not individuals dumping residential trash. They are commercial haulers and other businesses who don't want to pay for the cost of using a landfill. Cameras would help, but unfortunately nobody is going to prosecute these scofflaws even if they get caught. Last month, someone dropped several loads of used tires all over an access road. It was probably someone who was paid to haul them away from a commercial business and just decided to "cut corners" and pocket the dump fee. Business demanding a paid invoice from the dump before they pay the hauler might help. I cannot blame the residents of the area for this situation.
8/12/20, 2:04 PM

Anonymous said…
When did Stephen Miller's brother move to Missouri and decide to run for Congress?

Anonymous said…
Did he figure out where Saleen County was at?

Did he have find where in the constitution there are protected rights to life, liberty, and the pursuit of happiness?

The idiot should quit the race for Congress. His real calling appears to be sanitation engineer. Stick with your current day job.
8/12/20, 2:26 PM

Anonymous said…
I have nothing but respect for people willing to make the city a cleaner place. You'll never see Cleaver lifting a finger to do it.
8/12/20, 3:58 PM

Bandit said…
Cleaver doesn't lift a finger to do anything aside from stoke racial tensions. Worthless POS.
8/12/20, 4:42 PM