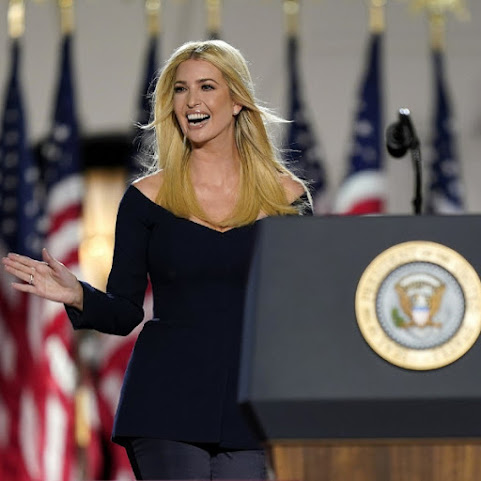 Tonight we consider the conclusion of the GOP convention and how Prez Trump literally starts the toughest part of his reelection campaign with a bang.

President Trump attacked Joe Biden as a purveyor of a liberal agenda that would lead America to ruin in his address accepting the 2020 Republican presidential nomination from the White House on Thursday, seeking to present a contrast with the Demo


'I love you for being real': Ivanka Trump lauds her father in personal terms

White House adviser Ivanka Trump praised her father for "being real" in a Republican National Convention address Thursday that sought to play down President Donald Trump's incendiary rhetoric and divisive policies. "Tonight, I stand before you as the proud daughter of the people's president," Trump told a packed-in audience of about 1,500 supporters on the White House South Lawn, minutes before her father delivered his nomination acceptance speech.

Painting a picture of horrors he claims await Americans if Democrat Joe Biden defeats him in November, President Donald Trump capped the 2020 Republican National Convention on Thursday by accepting his party's presidential nomination for the second time.


The striking contrast between the Democratic and Republican conventions

After testing every staff member, reporter and individual near the former vice president for two days in a row and asking members of the crowd to stay in or near their socially distanced cars Joe Biden and his wife still wore masks as they watched fireworks together, away from the cheering audience after his acceptance speech at the Democratic National Convention in Delaware last week.


Trump squares off with his own America as GOP convention concludes: ANALYSIS

On the final night of the Republican National Convention, as protesters massed outside the White House that was transformed into a grand political backdrop, President Donald Trump offered a sentiment the nation actually can unite behind.


Kamala Harris: The RNC "is designed for one purpose - to soothe Donald Trump's ego"

Sen. Kamala Harris excoriated President Trump in a speech pre-butting the final night of the GOP convention, accusing him and his Republican allies of ignoring "the reality" of an America facing crises of racial injustice, public health and economic despair.


The Latest: GOP convention wraps up with opera, fireworks

WASHINGTON (AP) - The Republican National Convention - the first political convention ever held at the White House - has ended with opera and fireworks. President Donald Trump wrapped up his speech closing out the RNC on Thursday by recounting the achievements of the nation's pioneers and pledging to forge achievements in energy development, technological advancement and space exploration, including putting the first woman on the moon.

Thing is, theatrics have a way winning over voters far better than riots.

I'm a moderate Democrat, will probably still vote for Biden but even if the ratings aren't as big. This was a much better show than what gripe fest DNC. Bill & Hillary ruined it for me.

Yet the President is still trailing in all of the swing states. Weird.

If you believe Hillary's rigged polls. Most don't.

I’m Weird Guy and I learned just how accurate polls are in 2016 right before my mental breakdown in the Javits Center.

Hello Tonyskansascity The Party is Starting. Missouri will remain a Red State Sleepy JOE will not win in MISSOURI. OR A SOCIALIST Governor. There are many communist that will vote for CLEAVER. ENJOY THE SHOW

The Party of Superior Intelligence grapples with the reasons behind November's landslide defeat. Sources say focus groups indicate voters prefer someone who likes their country to run it. FiveThirtyEight remarks that's not what the data says. A pie chart says that's 23% likely. Platform developing. The Party will seek to ban fireworks "for sure," said another source.

Who's the hot chick? She's a fine piece of ass.

I guess Kimberly and Don Jr used all the good stuff earlier this week.

Donald Trump will never abandon you.


It's so funny how the radical left can accuse Trump of being racist when he won the Ellis Island award and you can't be a racist to win that. They seem to not look at Jesse Jackson who said Trump was a friend of the minority. Then there is Joe Biden who was against desegregation and Kamala's family who owned slaves in Jamaica. The really funny part is they call us the Klan when most of the Klan are democrats, just take a look at Will Quigg in California and that is just one of many. Really sad how stupid some people are.

Trump and his entire "Used-To-Be-The Republican Party" has already declared loudly and often that this Election is "rigged", wonder how many times that will be repeated if he wins?

6:36 and Hillary and the dimwits have been saying that exact same thing for four years now. Weird.

I'm barak Obama and I say trump will never be president...writing from a secret location in Leavenworth ks.

Lowest rated RNC ever. Nobody watched. Nobody. Trump's cooked.

And libtard heads have been exploding ever since. The Demonrats are scared to death that Slow Joe will get his ass handed to him in the debates, mostly because he is Slow Joe but also because he is a senile old fart. The man will prove what a major pussy he is if he backs out. Either way it won't go well for him. Popcorn anyone?

You can't believe either side. You can choose one over the other, but both have a mix of lies and truth. By design. Keep fighting over dregs.

Melania and Ivanka are hot.

Michelle and Hillary not so much.

Can't wait to see the next DNC on the WH lawn. Apparently it's cool to do those conventions there now.

This speech was directed right at the base. Absolutely nothing new in it. Same old song and dance. The RNC has lost viewers each night and without seeing last nights numbers, I'm guessing they'll be about the same.

Weird, a guy who basically has run the country on a 4 year campaign of deliberate division, trolling and stoking unrest blames the other side when things boil over. And you all fall for the con. Buy you guys would eat Trump's shits like it was Nutella.

Weird, because the DNC convention wasn't watched by anyone and was a tone-deaf shit show in which no one was brave enough to even mention the riots.

The RNC convention was a parade of immigrant and minority success stories. Trump's poll numbers continue to rise as it turns out that people don't like the BLM terrorists that form the Democrat base.

What a shit-show that was this week. First you had the cocaine convention, then you finished with low-energy Trump. There was no vision, no platform, no plan. It was just an airing of grievances. Thankfully nobody watched it. More people watched the Dems. That's a bad omen for Trump.

Sounds like the libtards are upset that their AARP hostage video presentation last week was a major flop.

Bring on the debates! Oh wait, there aren't going to be any because Slow Joe and the Demonrats are grade A pussies!

What plan did Sleepy Joe manage to mumble off the teleprompter except more Orange Man Bad stuff?

Light vs dark, good vs bad, worn out cliche vs worn out cliche. You know, real heavyweight, highbrow, intellectual stuff 8:33. Only afterward did they get polling data telling them that leaving out the riots in Demonrat run shitholes was the mother of all fuckups.

5:29: Still lame after all times you've posted it. You need new material.

Still not refuted or even addressed by you, lame one, so it remains a great point.

9:41: And yet it's been refuted and addressed many times; you've simply lost the ability to do anything other than cut and paste.

Bullshit to English translation of 9:40: "I'm calling Trump low energy because it makes my corspe of a candidate seem better in my twisted little mind."

Not a word on CNN this morning about DC, riots (aka protesters) nor Rand Paul!

Not really, no. Let's hear your brilliant counterargument!

This news has not yet been approved by the Ministry of Woke Truth.

940 retard there is an election going on. Muh strategy stay in basement, prerecorded speeches, don't mention my opponent...

Hahaha it's so fuckinf hilarious watching the race baiting riot enablers try to distance themselves from the destruction they've been advocating for 3 months.

The fact is I'm here — " the president said before turning to face the White House behind him.

He then pointed at the building and asked, "What's the name of that building?"

Dementia at it's best. He can't he remember where he lives or what to call it.