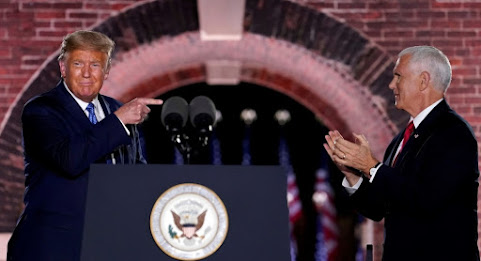 A quick review of highlights from night 3 and a glimpse at the GOP walking a tightrope betwixt hope for the future and fear of candidate Biden.

Kellyanne Conway, one of President Donald Trump's fiercest defenders, gave one more official boost to her boss during the third night of the Republican National Convention, as she prepares to leave the White House at the end of the month.


Pence warns US voters: 'You won't be safe' under Joe Biden

US vice president Mike Pence took center stage at the Republican convention Wednesday to warn voters they "won't be safe in Joe Biden's America" -- casting Donald Trump as their protector against the "radical" left.


At the Republican National Convention, You Might Think COVID-19 Was Over

Listening to the speakers at the Republican National Convention, you might be forgiven for thinking that the coronavirus pandemic is over


GOP sticks to convention message amid uproar over Blake shooting

Republicans stuck closely to their message during the third night of the GOP national convention, even amid a national uproar over the police shooting of Jacob Blake in Wisconsin.

For indispensable reporting on the coronavirus crisis and more, subscribe to Mother Jones' newsletters. Wednesday night, White House press secretary Kayleigh McEnany went on prime time TV during the third night of the Republican National Convention and told what might be one of the biggest lies of the evening.

Stand Up Push Back

There's an important and largely overlooked subplot to the Republican National Convention - call it the Republican Battleground States Convention. The GOP has gone all out to elevate the voices of Cuban-Americans in Florida, small business owners in Wisconsin and farmers in Iowa during the convention's first three nights.

By comparison, it makes the democrats seem very hateful.

^^^^They are hateful people.

Republicans? Yes they are.

5:27 The violent despicable dimwits fit your nasty hateful self to a tee, keep it up dumbass,

and yet all this violence is happening under a republican administration. Trump said he would end it all. He's done nothing. He is soft on law and order.

Yes, this and all the violence and destruction IS taking place under Democratic run cities and governed by Democratic Governors too.

The people instigating 99% of the violence and destruction are liberals and voting for Biden. There's no denying that fact. They don't believe in following law and order. They want to defund police so they can destroy more property, hurt more people and steal more stuff.

The PBS reporter looks like she would like to sit and lay around as much as possible and not stand for anything unless it's a line for free donuts.

You can't make this shit up, actually, I take that back, yeah you can. There's been plenty of made up shit (ie lies) during this convention.

^^^buT iTs DemOcRat RuN CiTieS, DoN't yOu KnOw?

Trump isn't targeting shit. He's targeting his base. That's all this RNC has been....for the base. He hasn't reached out to any other types of voters.

8:16 - is that really a fact? 99%? or is that just some number you sorta came up with your head? it seems like a number you just made up, call me crazy.

^^^Vice Presidents are not supposed to make waves. Any disagreement should be settled in private.

Which political party is now clearly known for looking the other way when people destroy and loot American cities? There is no doubt at all that it is the Democrapic Party. If you deny that, you've got your head up Joe Biden's dark dank ass.

Newsflash: Political conventions target their base and independents.

I've been enjoying listening to libtard heads explode all week. It's a wonderful sound!

Slow Joe's campaign must have gotten polling number that told him his speech full of cliches and failure to mention the "mostly peaceful protests" taking place in Demonract run shitholes is reflecting badly on him.

Took your ass long enough Joe! Are you going to tell us water is wet next? 🤣

What riots? According to CNN and the DNC, these are peaceful protesters!

Don't cry now because the DNC was too scared to even bring it up, lol

You obviously aren't watching. The convention has been nothing but a parade of minority, veteran, and immigrant success stories.

This lifelong republican is still voting Biden. Lock Trump up!

You tried impeachment, and it was a joke that drove up his poll numbers. Bring it on! Lol

^^and yet he has incredibly low poll numbers and will lose the election in a route. Weird.

Aw look! They know that Slow Joe will get his senile ass handed to him and they are chicken! 🤣🐓

Speaker Pelosi says that she does not think there should be any presidential debates between President Trump and Joe Biden:

“I wouldn’t legitimize a conversation with him.” pic.twitter.com/KkGSBAWrzy

This writer named Goodman is Saying Madame Secretary HILLARY Will, enter the Race after the D.N.C.TELLS SLEEPY JOE He has to bow out. Crooked Hillery is at work behind the scenes. The D.N.C.KNOWS THAT SLEEPY JOE CAN'T WIN.

who did not see this coming

dementia joe must be protected at all costs

kamala harris is giving the dem response to the rnc convention...can't even trot joe out for a 10 minute speech that is not prerecorded.

when is the last time he has been in public live?

and yet he still wins the presidency in a landslide. Weird.

The McCloskeys earlier convention speech was a hit.

I heard national treasure Kyle Rittenhouse is next up on the podium.

Despite claiming to be a party of law & order, the GOP seems to celebrate a lot of law breaking vigilantes. They continue to cheer-lead the violence and root for more riots.

You ain't black if you don't vote for Joe and the Hoe!

8:26 you must work for CNN. Open your mouth then hope the facts check out.

Or, the great right wing conspiracy. These Libs love Russia. Stay tuned for more coming from Durham investigation. Libs will be eating their own.